by mystery guest
by Leighton Gage

Leigh Lundin: When writers claim excitement introducing a guest article, you can expect a great deal of hyperbole. Not in this case.

A couple of years ago, a group of eight international mystery writers banded together to form the blog, Murder is Everywhere. I'd already met Michael Sears, Stanley Trollip, and Yrsa Sigurðardóttir, and I was pleased to read other contributors, especially today's guest, Leighton Gage.

Leighton Gage lives in a small town in Brazil and writes police procedurals set in that country. A Vine in the Blood, the latest installment in his Chief Inspector Mario Silva series, was called “irresistible” by the Toronto Globe and Mail. Coincidentally, that was the very same word the New York Times used to describe the previous book in his series, Every Bitter Thing. Vine also garnered a star from Publisher’s Weekly. 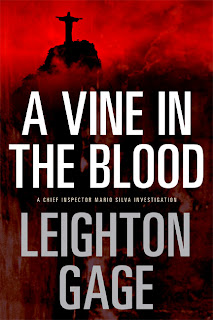 I touched base with Leighton about the time my AOL account crashed and burned, but his daughter managed to send me a 'fita do Senhor do Bomfim', a ribbon I use as a bookmark.

Leighton created today's article, one I wish my mother, a student of American Civil War history, could read. Indeed, I felt a pleasant frisson of discovery when I first read this exciting bit of history by Leighton Gage.

One day, a couple of years ago, I was in an office in São Paulo chatting to a friend in English. A lady I didn’t know came up to us and joined in the conversation. She spoke with the dulcet tones of the American South, and I asked her where she was from.
“I was born here,” she said, meaning Brazil.
“Okay. Your parents, then?”
“Here. And my grandparents too.”
And then she told me the story of the Brazilian Confederates, which, Dear Reader, I’m now going to pass on to you:

After the War Between the States many families from the old South were left landless and destitute. They hated living under a conquering army of Yankees. They were looking for a way out.

Dom Pedro II, the progressive Brazilian emperor of the time, offered it. He was interested in developing the cultivation of cotton, and he gave tremendous incentives to people who knew how to do it. Land could be financed at twenty-two cents an acre. Passage cost no more than thirty Yankee dollars. Scads of people from Alabama, Georgia, South Carolina, Mississippi and Texas took him up on his offer.

Many of them settled in the State of São Paulo in the towns of Americana and Santa Barbara D’Oeste. The name of the former is derived from the Portuguese for “Village of the Americans” and the latter is sometimes called the Norris colony, named after Colonel William Norris, a former senator from Alabama who was one of the founders.

He's the gentleman in the photo at right. If you’re a Civil War buff, and would like to experience a vestige of the Old South, I suggest you go to Santa Barbara on the second Sunday in April. That’s when they hold a yearly party on the grounds of the cemetery. Yeah, that’s right, the cemetery, the one where all of those old confederates are buried.

You’ll find it behind the church that faces the square with the monument.

The folks in Santa Barbara really know how to stage a party.

You can eat southern fried chicken, vinegar pie, chess pie and biscuits. Banjos are played. Confederate songs are sung. The women dress in pink and blue and wear matching ribbons in their hair.

There’s square dancing for the young folks. The men of all ages get drunk and replay the war, looking at first as if they’re celebrating a victory. But at the end of the performance the bearded actor, playing Gen. Robert E. Lee, falls down as if mortally wounded, a Confederate flag wrapped around him.

And, if you visit the church for the memorial services, you might even get to meet Becky Jones, who presides over the Association of Confederates.

Becky learned her English from her parents. They learned it from their parents. And so on. Prompted, she’ll tell you that (even) Damnyankees are welcome to the party, but they have to expect to be received differently than someone from the South.

She might tell you, too, about her grandmother, Mrs. MacKnight-Jones, who survived well into her nineties. Grandma learned from her parents never to call Abraham Lincoln by his name. In their household he was only referred to as "that man".

And that family tradition goes on until this very day.
Posted by mystery guest at 00:01