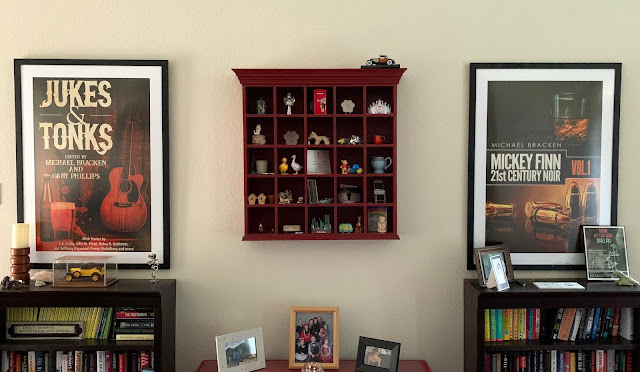 I know I’m lucky. Temple is supportive of, and often takes an active role in, my writing career. Not all writers can say that about their spouses.
Early indicators of Temple’s support include her having a copy of my first professionally published short story framed to hang over my desk and her having the covers of four magazines with my name on their covers printed on mugs so that when I have my morning pick-me-up, I can pick me up.
The latest example involves redecorating decisions precipitated by family tragedy.
The summer before our November 2015 marriage, Temple’s brother Peter unexpectedly died. The two were quite close, and Temple was devastated by the loss of her younger brother.
Peter was a Pearl Jam fan and, after his passing, all nine of his Pearl Jam concert posters—professionally mounted and framed under glass—passed to Temple. So, to honor Peter, the posters became focal points in four rooms: the living room, the dining room, and both of my offices.
Hanging the Pearl Jam posters not only honored Peter, but their presence reminded Temple of him every day and, because visitors often asked about the posters, allowed Temple to share her memories of Peter. No matter what we did, one of the living room posters was constantly askew, exactly the kind of thing Peter might have done to annoy his sister.
Earlier this year, Peter’s now-teenaged daughter asked for the posters. Though the decision to relinquish them was heartbreaking, Temple gave the posters to her niece, which left large, empty spaces on the walls of four rooms.
The smaller posters in the dining room were replaced with Temple’s mother’s artwork. (Both her mother and my mother were artists, so we have their paintings, watercolors, and drawings decorating nearly every room in the house—but that’s a post for another time.)
One living room wall, which had contained two of the three largest Pearl Jam posters, remained near-barren, as did the wall directly behind me when I’m sitting at my desk, which contained the third of the three largest posters.
Nothing we already owned—and, trust me, we have a great deal of artwork created by our mothers, as well as miscellaneous artwork and posters created by non-family members—seemed appropriate. Temple nixed everything I suggested.
Then one day, as she looked at the covers of the three anthologies I’ve edited for Down & Out Books, she said, “You know....”
She told me that homes should be decorated to reflect their owners and not to reflect the contents of the sale bin at Hobby Lobby. More importantly, replacing Peter’s Pearl Jam posters with my book covers would do exactly that. She would be exchanging something that reflected the essence of her brother, whom she loved dearly, with something that reflected the essence of her spouse. Besides, she said, “They’re really cool covers.”
And a few weeks later, after having the covers enlarged, printed, and framed by CanvasPop.com, the covers for Jukes & Tonks and Mickey Finn: 21st Century Noir were hanging in our living room, and the cover of The Eyes of Texas: Private Eyes from the Panhandle to the Piney Woods was hanging in my primary office.
Many writers don’t have spouses who take active roles in their writing careers, and fewer still have spouses who decorate the living room with giant reproductions of their book covers.
As I said at the beginning of this, I know I’m lucky.

When the Private Eye Writers of America’s 2021 Shamus Award nominees were announced earlier this month, I was surprised and delighted to see that two short stories from issue 7—the special PI issue—of Black Cat Mystery Magazine were nominated: Gordon Linzner’s “Show and Zeller” and fellow SleuthSayer John M. Floyd’s “Mustang Sally.” As editor of BCMM, I shan’t play favorites, so I’m hoping there’s a tie vote and that both Gordon and John receive a Shamus Award.
Posted by Michael Bracken at 00:00