What to Do With the Body

One of the major tactical problems with murder is what to do with the body. Any idiot can kill someone (or so it seems), but successfully corpse disposal is rare. Very few murderers have incinerators on hand, or woodchippers (not to mention the stomach for it), or work for a funeral home, meat packing plant, or meat pie production line. Sweeney Todd is famous because he was rare – and even he got caught. (See? Now you can sleep better at night.)

Of course, the main thing that has almost always been done is to dump it. Whether in deep water, with weights (BTW swimming pools are a poor choice: stick with oceans), or in a remote wooded location, or in a ditch, or sometimes at someone else's door, dumping the body followed by running like hell is a time-honored tradition. This is why people keep stumbling over bodies when they go hunting, fishing, hiking, skiing, or walking down dark alleys. And then the police show up, and sometimes the FBI, and, very often, they can track the murderer down.

Burial is also popular. However, a word of advice: don't do it on your own property. And when the police show up asking to search the place, don't tell them "Sure, search away. Just not over there." (Yes, that happened, I believe in the Daybell case.) Another word of advice: dig deep. And then deeper. And then deeper still. And, after filling the grave, plant something quick and spreading. Agatha Christie (in Nemesis) used Polygonum Baldshuanicum, a/k/a MileAMinute. Kudzu would be perfect.

Another very common method of disposal is putting the corpse in the freezer. There was the woman in Japan who kept her mother's body in a freezer for 10 years, because that way she got to stay in the apartment on her mother's senior citizen rent. A man died, and as people were disposing of his estate, they opened his freezer, and found his mother's body in it. Back in April, 2021, a freezer filled with human body parts was found dumped and half-buried in the Alaska woods (interesting combination). (The article goes on to list a number of freezer disposal incidents HERE) And if you google "corpse in freezer", you get an endless list of hits.

My Note: The problem, of course, with the corpse in the freezer is then, what do you do with the freezer? As that google search will tell you, this has stymied a lot of people.

Now you may be asking, what has gotten Eve so interested in body disposal? No, I have not, nor am I planning to kill anybody. No, no, I do but jest, poison in jest; no offence i' the world.

But what sparked my interest was a highly unusual place for a body: Inside a papier-mâché dinosaur statue. Specifically, a stegosaurus, although I'd have been just as intrigued if it had been any kind of dinosaur sculpture. 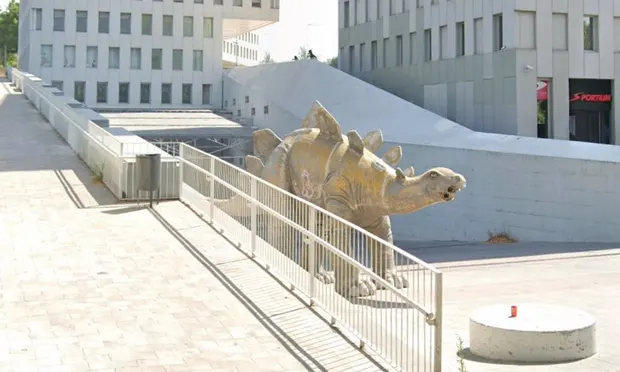 It happened in Barcelona, Spain. Apparently a father and son, walking by the sculpture, noticed the smell (this is almost always a give-away). Now, here's the tricky bit:

While police have not confirmed how he got inside, local media reports that the man dropped his phone inside the statue and was trying to retrieve it, BBC News reports. He fell inside, hanging upside down, and was able to call for help. However, police have not confirmed how the man got inside the dinosaur. Police are awaiting the results of the autopsy to find out the cause of death. (CBS News)

Here are the obvious questions:
Inquiring minds want to know.
Meanwhile, please, don't try any of this at home.
Posted by Eve Fisher at 00:01