I've been incorporating a few songs by Warren Zevon into my open-mic repertoire. I've played "Mr. Bad Example" and a couple of others off and on for several years, but lately I've been polishing "My Ride's Here." It's the title track from the CD Zevon released soon after he knew he had terminal lung cancer. He always had gallows humor. 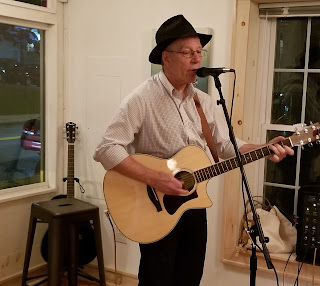 If he hadn't been a musician (Mostly piano, but also guitar and harmonica), he might have become a hardboiled crime writer. He co-wrote a song with novelist Thomas McGuane and collaborated on a song and novel with Carl Hiaasen, both called Basket Case ("My baby is a basket case/A bi-polar mama in leather and lace"). He dedicated an early album to Ken Millar, AKA "Ross Macdonald," and was good friends with Hunter S Thompson, whose Fear and Loathing in Las Vegas book cover may have inspired one of his own covers. 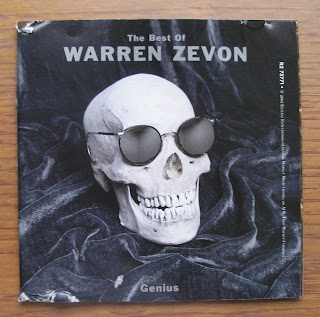 Zevon was born in January 1947, two months before me, and died in September 2003, three months after I left teaching and the same month I returned to writing after a 20-year hiatus. His father was once a bookie for gangster Mickey Cohen and had been a prizefighter before moving from Chicago, where Warren was born.

In his nearly 40-year career, Zevon met Igor Stravinsky and performed, wrote, or drank with half the rock and roll hall of fame, including the Everly Brothers, Jackson Browne, Don Henley, Joe Walsh, Bruce Springsteen, Tom Petty, Lindsay Buckingham, Emmylou Harris, and members of R.E.M. Many of them performed on his last CD, The Wind, released less than two weeks before he died. Two songs on that CD posthumously won his only Grammie awards. The CD also features a cover version of Dylan's "Knocking on Heaven's Door" that will give you chills. 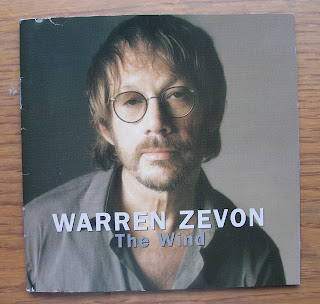 Because Zevon's humor was often dark and his stories and imagery jarring or downright disturbing, few of his songs got airplay except "Werewolves of London," but he also wrote songs for the Turtles in the 60s, and Linda Ronstadt covered "Hasten Down the Wind" and "Poor, Poor Pitiful Me" in the 70s.

"Carmelita," a ballad about a junkie, offers the chorus "I'm all strung out on heroin on the outskirts of town." Not quite what they were looking for in Peoria. "Excitable Boy" tells of a young man who murders the girl he takes to the junior prom. Zevon called the victim "Little Susie," a wink at the girl who fell asleep at the movies in the Everly Brothers song. "Werewolves of London" offers this gem of wordplay: "Little old lady got mutilated late last night/Werewolves of London again."

OK, not everyone's bucket of blood...

He played piano behind the Everly Brothers, then worked with each of them individually after their break-up. He co-wrote several songs with Phil (Who may have given him the idea for "Werewolves"). He also filled in for Paul Shaffer as music director for David Letterman, one of his lifelong friends. Letterman had him as his only guest for a one-hour segment after he announced that he was dying.

Zevon told great noir stories, including "Excitable Boy." "Lawyers, Guns and Money" is about a rich screw-up trying to buy his way out of trouble, and one of his most bizarre songs (Which every Zevon fan knows by heart) is "Roland the Headless Thompson Gunner." It tells of a mercenary who is killed by another mercenary, and his headless ghost comes back to get revenge. "Boom Boom Mancini" is an homage to the boxer, probably inspired by his own father's early boxing career. "Mr. Bad Example" chronicles the life of a perpetual con man and gives an autobiographical nod to his father's carpet store in Arizona. "I got a part-time job in my father's carpet store/laying tackless stripping and housewives by the score." Zevon's son Jordan hypothesizes that the old building may have been where Dad got the asbestos exposure that caused his cancer years later. Taken as a whole, the song feels like a Donald Westlake caper set to music.

He could be tender and sentimental, too. "Keep Me in Your Heart," one of his posthumous Grammy winners, tells his lover, "If I leave you it doesn't mean I love you any less/ ...You know I'm tied to you like the buttons on you blouse/ ...Hold me in your thoughts, take me to your dreams/Touch me as I fall into view..."

He also wrote one of the great earworms. "Hit Sombody (The Hockey Song)" introduces us to Buddy, who "wasn't that good with a puck."

"Buddy's real talent was beating people up/His heart wasn't in it, but the crowd ate it up.../ A scout from the Flames came down from Saskatoon/ Said, "There's always room on our team for a goon."

The ending is both funny and poignant. Find it on Youtube and accept that it will stick in your head for the rest of the day. I used the title for one of my Roller Derby novels because it captures the raunchy humor of the self-described Bitches on Wheels. If he'd lived longer, Zevon might have written a song about them, too.

My Ride's Here has a cover photo of Zevon peering from the window of a hearse. The title track mentions Jesus, Milton, Shelly, Keats, Lord Byron, and John Wayne (Who also died of lung cancer) and alludes to Elmore Leonard's twice-filmed 3:10 to Yuma. 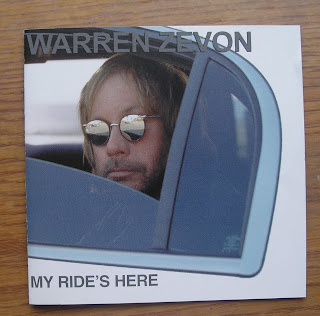 Jordan assembled a songbook of his father's songs that I wish were three times as thick. It gathers most of the cult "hits," but omits a few I've used in my own writing. "Hit Somebody," for example. "Run Straight Down" became the title of my standalone novel about a shooting in a public high school (David Gilmour of Pink Floyd plays guitar). I'd love to find an accurate transcription of "The Hula Hula Boys" about a man with a philandering wife that could be a Raymond Chandler novel. "Ain't That Pretty At All" and "Looking For the Next Best Thing" could be novels or stories, too. And, again, funny...sort of.

I still want to create a story matching the wisdom Zevon shared with David Letterman on that TV segment when Letterman asked him if he'd learned more about life and death since his terminal diagnosis: