Ever been to a Jewish wedding? Here's your chance!

I've heard fiction readers say many times over the years that they love learning new things. They don't want lessons like in school, but getting an inside look at a profession or learning what it's like to live in a different part of the world, these are experiences readers seek out.

I had this idea in mind when I was planning to write my newest short story, "A Tale of Two Sisters." It's published in Murder on the Beach, an anthology with eight short stories, most of them novelette length (as mine is), which was published last week. All the stories are set, as you can imagine, on a beach. All different ones. The stories take readers to the shores of Connecticut, Maryland, Florida, Louisiana, Texas, Mexico, California, and Wisconsin. The Wisconsin story is mine, set at a beach resort on Lake Michigan.

Because my story takes place during a wedding, I wouldn't have the opportunity to take readers on a tour of the Wisconsin town. And because my story is written from the perspective of the maid of honor, I couldn't give an inside look at a wedding-related profession, such as a wedding planner or a caterer or a photographer. What kind of inside experience could I give people that they might not know much about? 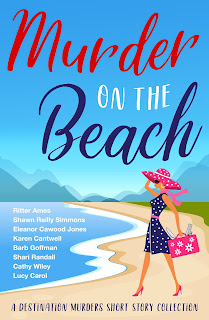 What if, I thought, I set the story during a Jewish wedding? That's not that exotic to me, since I'm Jewish. My family and a lot of my friends would probably feel the same way. But a lot of people have probably never been to a Jewish wedding. The customs and traditions would be interesting. Readers could experience going to a Jewish wedding without having to get dressed up or buy a gift. And thanks to the power of exposition, it would be like having a Jewish friend sitting with them throughout the event, providing short explanations of the things going on. Jewish readers would probably enjoy the story too, I figured, because they may never have read a story that showcases these traditions.

Once I decided to write the story, I realized I've only been to three Jewish weddings in the past decade, and I wished I'd taken notes. My memory isn't what it used to be. Thankfully, I have several friends who offered their recollections, and I used some of their last names in the story as a thank you.

So, if you've ever wondered what the hora is, I've got you covered. The ketubah, that's in there. Ever wondered why you'll see some brides--and sometimes some brides and grooms–circling each other? You'll want to read my story because all will be revealed.

Lest you think the story is all about culture and tradition, don't worry if that doesn't interest you very much, because while a Jewish wedding is the setting of my story, and while I hope readers will find it interesting, my main goal in writing "A Tale of Two Sisters" was to entertain the reader. More specifically, I wanted to make people laugh. The editors of the anthology said they wanted light funny crime stories, so that is what I set out to write, and I believe I succeeded. Multiple readers have told me in the past week that they found my story "hilarious." That made my heart sing. It wasn't enough to make me break into a hora (since you need multiple people for that), but I did do a Snoopy dance in my chair.

If you want to learn more about the anthology, especially the stories by my co-authors, you're in luck. We're having a launch party on Facebook on Friday, June 4th. Each of us will talk about our stories for a half hour, and there will be videos and giveaways. The fun will run from 5-9 p.m. ET. Feel free to pop in and out as time allows. I'll be speaking (typing) from 7-7:30 p.m. ET. For the full schedule, and for the event itself, please go to the Destination Murders page on Facebook by clicking here.

Murder on the Beach has stories by Ritter Ames, Karen Cantwell, Lucy Carol, Eleanor Cawood Jones, Shari Randall, Shawn Reilly Simmons, Cathy Wiley, and me. It's out in ebook form from all the usual suspects (at a discounted rate until Friday, I believe), and in another week or so the trade paperback version should be out too. I hope you'll check it out. This is one book that will make you smile while showing you that sharks aren't the only danger near the water.