Why I Don't Read or Write True Crime, Part Three 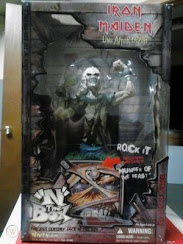 This particular jack-in-the-box was a gift from a former student. And the kid who gave it to me was one-of-a-kind. As a seventh-grader he'd gotten himself into a remarkable amount of trouble, and by the time I got him as an eighth-grader his parents had tossed out all of his black clothes, his guy-liner, every piece of studded black leather, all of the things that he had worn or used to drive them crazy before the final time he'd gotten himself kicked out of school. When I met him, he dressed like a preppy, because his parents picked out his clothes and insisted he shut the door on the black leather and the emo music.

So when I mentioned that I had first seen Iron Maiden in concert as a high school senior in 1982, he decided I was alright. One thing I've learned in all of my years of teaching is that people can connect over the smallest of things. British metal band Iron Maiden was my point of connection with this young man.

His family moved out of state at the end of the year, and right before he left, he gave me the aforementioned jack-in-the-box. I was really touched by the gesture, and by how happy his family was with how much better this very intelligent young man was doing in school. So when his parents sent me a Facebook friend request before they left so we could stay in touch, I was happy to agree to it.

Three years later he killed himself. Over a girl.

I had another student once who robbed a guy in a parking lot drug deal after the guy (who was his dealer) showed him the big bag of money he had made from selling pot. So my former pulled a pistol, took the money, and jumped into a waiting car (driven by another former student of mine). The robbed dealer gave chase on foot. The robber used his gun and shot out the window as they drove off. He killed the the guy.

Both he and the driver are still in jail. 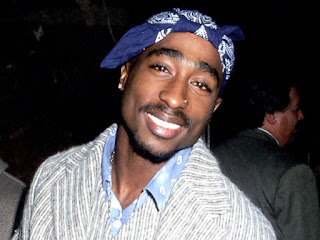 Just a few years ago I had a student who had been diagnosed with O.D.D ("Oppositional Defiant Disorder"). He spent his days at my school acting out, cussing out teachers, and doing no work. Once again I got lucky. I knew who Tupac Shakur was, and had seen him in concert when he was just starting out (how that came about is a long story in itself.). This kid loved Tupac.

So we got along.

But I wasn't very successful at convincing him to cut other people (students, staff, you know, everyone) any slack. So he was always in trouble. It was shame too, because he was a big, funny, goofy kid. A talented athlete, too. He played basketball on a really good AAU team. He just had no common sense and a get-out-of-consequences-free (for the moment) card.

He went off to high school and I wondered whether he was going to be able to stay out of jail.

He's been busted several times in the intervening years for a string of burglaries, and recently tried to rob a convenience store late one night. The clerk he tried to rob was armed and the two exchanged gunfire. Both were hit. And my former student ran off. He has since turned himself in to police.

These are real stories. This is literally "True Crime." I find it in no way entertaining. There's a human cost here that is painful to recall. And for me there's no escaping it.

And that's why I neither read nor write True Crime.

Posted by DoolinDalton at 04:07