I saw Tony Richardson’s Charge of the Light Brigade in , the year it came out, and was enormously impressed.  (Apparently the release was cut by some six minutes, and the DVD is missing that footage.)  Watching the picture again – has it really been fifty years? – I recognize its strengths and weaknesses, but I think I gave it more credit than it was due, at the time.

For example, what is Vanessa Redgrave doing in the movie?  She was big box office, after Blow-Up and Camelot, but her character in Light Brigade is a superfluous distraction.  She sleeps with her husband’s best friend, but other than demonstrating the impenetrable superficiality of the ruling classes, it has no dramatic purpose.  For another, they don’t manage to make it entirely clear why Cardigan leads the Light up the wrong valley, and charges directly into the Russian cannon, instead of flanking them – which leaves a pretty big hole in its pretense to historical accuracy.

That being said, the movie has wonderful virtues.  The production design, which conjures up the dense ecosystems of David Lean’s postwar Dickens adaptions, and the cinematography by David Watkin, he of Robin and Marian, Chariots of Fire, and Night Falls on Manhattan.  But chiefly, the inspired casting.  Some of the actors weren’t even ’s original choices – amazingly, Trevor Howard as Lord Cardigan, a part offered to Rex Harrison.  No disrespect to Rex, but seriously?  In a career that includes Brief Encounter, The Third Man, The Roots of Heaven, and Sons and Lovers, watching Howard chew on his mustaches in this performance is nothing short of heart-stopping.  His glaring matches with Harry Andrews as Lord Lucan (in life they were brothers-in-law and cordially disliked one another) are sulphurous.

Howard and Harry Andrews aside, there’s the gloriously nasal John Gielgud as Raglan; the inimitable Peter Bowles (later of Rumpole) at his most fatuous, and Jill Bennett as his lion-hunter of a wife; tragically memorable, Norman Rossington, Albert Finney’s best mate in Saturday Night and Sunday Morning, the Beatles’ manager in Hard Day’s Night, as the Sergeant Major compromised by his commanding officer, Cardigan, and broken to the ranks – one of the more brutal and graphic flogging scenes in any movie.  David Hemmings, though, is disappointing in the pivotal role of Nolan, too languid and too pretty.  (And reportedly insufferable during filming.) 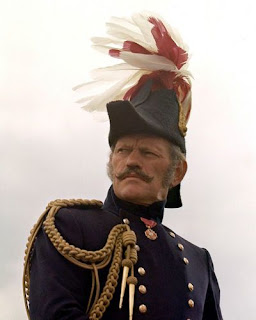 The other point to make is of course the context.  Like many pictures from the late 1960’s and early 70’s, Charge of the Light Brigade falls under the shadow of .  In this case, not so much metaphorically, because the Crimean War was itself a huge folly.  The mismanagement of the war, and the management of public opinion, were two sides of a coin.  Cardigan was a hero in after ; Lucan was in disgrace.  It was years before Cardigan’s reputation began to suffer, and even after he was exposed as an incompetent, there were people who refused to believe it.  (Cardigan’s bravery wasn’t doubted, but his leadership was a joke.)  The very real benefit that came out of the ’s “confusion of purpose” was the reform of the British Army that did away with the purchase of commissions and brought in a policy of promotion by merit.  Not perfect, but a start. 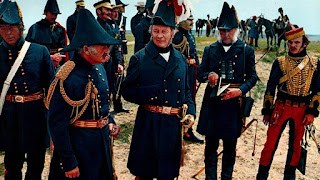 was often seen at right angles, or in reflection, not in our direct gaze.  Lost Command, Mark Robson’s version of Larteguy’s The Centurions, came out in 1967, and The Green Berets in ‘68.  They weren’t box-office bombs, but opinion was divided on their merits.  The more common approach was peripheral.  M*A*S*H supposedly took place during .  Nicholas and Alexandra is a lot more about the year of its release, 1971, than it is about the fall of the Romanovs: it’s , , and . 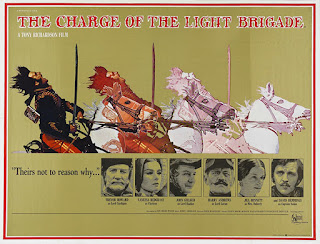 Charge of the Light Brigade came out in 1968, after the Tet Offensive.  The timing is coincidental, but the movie’s antiwar sentiments were sharpened considerably by what was widely viewed as an American military and political embarrassment.  (Historically, it was a defeat for the NVA and Viet Cong, but the public perception in the and was quite different.)  Light Brigade, then, becomes a provocation, and a warning against foreign adventurism.  It’s not about a war a century old, but a war very much in the here and now.  And the generals bickering over who gets the blame for the slaughter remind us uncomfortably of the tone-deaf Westmoreland, with his talk of a light at the end of the tunnel.  No accident.

We imagine we made peace with .  Not with per se, a country that makes us sweatshop sneakers, but with as an American failure, which is complete nonsense.  Missing in Action is psychological denial, Chuck Norris fighting the war over again, but winning this time.

Charge of the Light Brigade is a moment frozen in time.  Not the , but 1968.  It betrays its own period.  I don’t think it’s a bad picture, far from it, but I think it shows its age.  You look at a movie like The Thin Man, and admire or indulge its representation of its own time and place, but still think it has a universal charm, whether or not it’s dated.  You give it the benefit of the doubt.  Light Brigade is too much the product of its own particular period; it can’t breathe.  It’s trapped in its immediate context.  That immediacy, which made it seem so genuine and alive back then, makes it an artifact now.  It’s a fossil.