The Macabre (True) Story of the Sunshine Lady, with an Appearance by Mr. Poe

It’s my unfortunate predilection to use my wife’s speaking gig and book tour absences as opportunities to eat and drink inappropriately. That alone can explain why and how I found myself a year or so ago in the darkened back bar at the Poe House in Hendersonville, North Carolina, a “quaint” town not far from where I live. The Poe House is an Edgar Allan Poe-themed tavern that is part wine bar, part music venue, part cocktail joint.

Poe and alcohol did not mix...well. Eight years before his death, Poe wrote a letter hoping to clear himself after W.E. Burton, a former employer whom Poe despised, circulated rumors of Poe’s drunkenness.

“I am temperate even to rigor,” [Poe wrote.] “At no period of my life was I ever what men call intemperate…. My sensitive temperament could not stand an excitement which was an everyday matter to my companions. In short, it sometimes happened that I was completely intoxicated. For some days after each excess I was invariably confined to bed. But it is now quite four years since I have abandoned every kind of alcoholic drink—four years, with the exception of a single deviation…when I was induced to resort to the occasional use of cider, with the hope of relieving a nervous attack.”

Whatever the truth, it has certainly not stopped barkeeps from using his lugubrious mug to decorate various drinking establishments. I’m getting good at ferreting out such places, and I’ll get to them all someday. 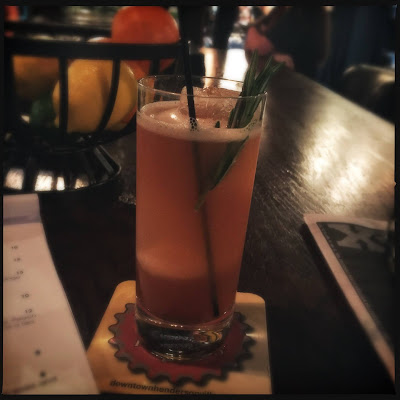 Red Death. In a glass.

On this occasion, as I sipped my Mask of the Red Death*—a beverage containing Tito’s, pomegranate juice, grilled lemon, rosemary simple syrup, with a rosemary sprig—I continued to peruse the Poe House cocktail menu**, which featured drinks with names like Amelia, Absinthe Drip, Virginia Clemm, Poe-a-Tree, Tales of Mystery, That Girl, Insanity, and Brewed Nevermore (your basic coffee and bourbon concoction).

“You don’t have a Sunshine Lady cocktail?” I asked the bartender.

If you spend time poking around the Oakdale Cemetery just off Hendersonville’s main drag, you will eventually encounter the most boring tomb imaginable. A rectangular, above-ground sarcophagus covered on all six sides with concrete. This is the final resting place of one Lelia Davidson Hansell***, who endures in local legend as the Sunshine Lady. 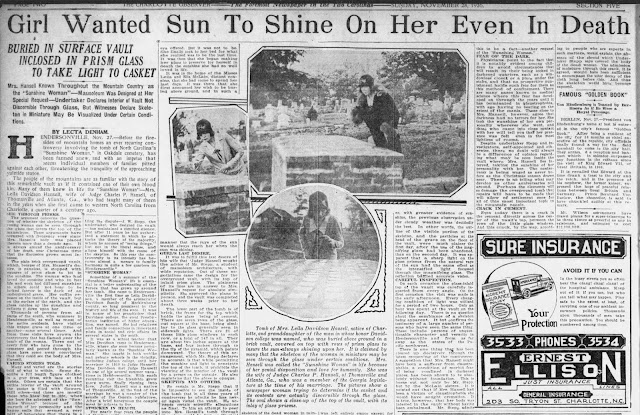 She was born in 1861, and hailed from a wealthy family whose name graces a nearby college. She and her husband, Judge Charles P. Hansell, lived in Thomasville, Georgia, but resided in our mountainous region 18 months before the end of her life. Judging from Mrs. Hansell’s death certificate, I suspect that her relocation was in order to avail herself of the region’s “breathing porches.”  This is where one came to sit, and to breathe mountain air, theoretically extinguishing toxins lodged in one’s lungs. In this case both air and porches proved insalubrious. In December 1915, Mrs. Hansell expired at the age of 54 from pulmonary tuberculosis.

The story goes that Mrs. Hansell abhorred the notion of being confined to a tomb for eternity. She  extracted from her husband a promise to bury her in such a way that the sun would always shine upon her face. Acceding to her request, he entombed her in a sarcophagus topped with blocks of prism glass. This is the glass you find embedded in sidewalks of great American cities. “Vault lights” allowed daylight to illuminate the basements of major buildings in the age before electric light. Prism glass was clear when installed but turned purple as its manganese content aged.

I lived in Hendersonville—aka Hendo, aka Hooterville—for a year when we first moved to the South. The Sunshine Lady became one of my brief obsessions. I’d poke around the web whenever I had a spare moment, looking for specific details, and wrote a short story inspired by the tomb.****

I learned that for decades the Sunshine Lady became Hendersonville’s most morbid attraction. I found mentions of the grave in 1930s-era WPA Guides to North Carolina. I read accounts of children selling cups of water outside the cemetery gates, instructing tourists to rub a few drops with their fingers on the scuffed glass blocks in order to better peer at the tomb’s occupant. And I’ve found articles in which longtime residents swore that when they were children themselves they’d still been able to gaze upon the corpse’s skeletal countenance, framed by a beautiful mass of auburn hair.

I have no idea if that’s true or even possible, though Mrs. Hansell’s obituary praised “her character of unusual beauty.” The examples of prism glass I’ve seen are very opaque, but admittedly I’ve only seen aged specimens.

Eventually, the town fathers got tired of this hideous spectacle. A local historian writes, “Many people expectorated on the glass and for sanitary reasons the top will be covered.”

Guess they got tired of buying water from the local kids. 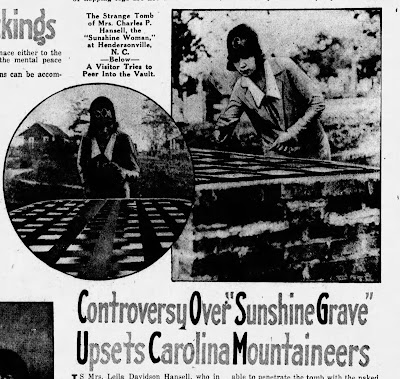 But I’m sure there were other reasons they altered the tomb. If I may be permitted to speculate, wise Appalachian soothsayers probably foresaw that one day this sleepy Southern town would be a mecca for people seeking microbrews, homegrown apples, quilted handbags, homemade country pickles and preserves, antiques, and cute carvings of black bears. Hooterville could no longer be known as the place where people came to gaze upon the grinning face of death.

In 1937, the tomb was refurbished. It looks to me like a couple of thick skim coats of concrete did the trick, but it’s entirely possible they replaced the glass blocks with cinderblock. Who knows.

I do know that it’s the creepiest thing we’ve got around here, and I could not sleep the night I first heard the story in a local coffee shop. How much of the tale is true? How much embellished? I suppose at this point it does not matter. What does matter is that an enterprising bartender simply must dream up a suitable drink to honor the city’s most morbid resident—and fast. My nerves are so shot I might be forced to guzzle cider.

* “Mask” was used in the title when Poe’s tubercular nightmare first appeared in Graham’s Magazine in 1842, a month after he quit his post as the magazine’s editor. It’s been “Masque” since 1845 on.

** Alas, no Amontillado on the menu.

*** I’ve seen her forename spelled as Lela, Lelia, and Leila. The obit says Lelia, but the death certificate says Leila. I hate history.

**** My short story treats the whole legend as a ghost story. Download it free 'til the end of the month right here. And Happy Halloween!

See you in three weeks!