by R.T. Lawton
From March through August is a long time to have a void in your socializing. It's enough to make you start talking to strangers in a park, regardless of what your mother told you about not doing that sort of thing. 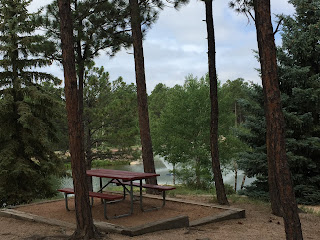 The situation finally got so bad that one morning the wife and I decided to hit the drive-up at Starbuck's for coffee and lemon bread snacks. Of course, the people in line behind whoever is being served at the window tend to get a little perturbed if you pause for very long to converse with the window employee, so we soon knew it was time for us to move along. Now, we needed a place to enjoy our morning coffee. This led us to a nice, little, hidden-away park with some elbow room and a beautiful view of nature. A place called Fox Run.

We had barely settled in at a metal picnic table, sipped our coffee and opened our sealed packets of lemon bread, when a young fellow with camera and long lens walked up and inquired if he could use the far end of the table for a short while. Well, I had my large, red, Harley bandanna down around my neck and my wife had her surgical mask off so we could eat and drink in comfort, but it was a large table with plenty of room for social distancing, so we told him to go ahead and use it.

Naturally, one thing led to another and a conversation ensued. It started with cameras and photography. On this particular day, he was shooting photos of the turtles in the upper lake. That led to the usual where are you from, where did you go to college and what kind of work do you do. After all my years of subtly interrogating people as a Special Agent, I don't mind asking questions, and I've found that most people like talking about themselves if you can once get them started. Strangely enough, they get so involved talking about themselves that few of them ask questions back.

We soon found he was an artist painting in the abstract style and had also tried his hand at a little writing. We then had an interesting conversation on such topics as creativity and inspiration. At the end, we swapped get-in-touch information and went our separate ways.

Michael DePalma is his name.

Over the next couple of weeks, I went to his two websites:http://www.waveformexpressionism.com/and http://www.thewaveformexpressionist.net/ . And, while I know very little about painting and the techniques involved, not to mention the various styles, I do know if something is pleasing to my eye. If we had the money to buy paintings, the wife and I would now be owners of a couple of Michael's paintings which spoke to our artistic interests one way or another.

In some of Michael's blog articles, I found pieces on inspiration, writer's block, creativity and other topics of interest for writers. For myself, I have always found it interesting and motivating to discuss creativity with someone in one of the other branches of the Fine Arts. It seems that the inspiration and creative process in other branches is often comparable to what writers go through for a completed manuscript. It is all art in different forms.

But, like all in the Fine Arts, success is a pyramid with limited room at the top for only a few artists (writers/musicians/actors/etc.) to make big money. Artists are lucky if they can even be high enough on the pyramid to make a living. Some don't become successful and their works valuable until after they are dead and gone, as if they were just then discovered. For many of us writers, it's a good thing we have a steady income, or 9 to 5, or even a retirement pension to pay the bills while we create. For those who don't have that safety net to fall back on, it can be an insecure world.

So what we have here, is a graduate from a prestigious university who is trying to exist on his creative talents, but still needs to live on more than thin air. What he is looking for now, is a job in the graphic arts field where he can put his creative talents to good use.

Check out his two websites, observe his artistic talent and read some of his blog articles. Then, if you like what you see and happen to know of an opening in the field of graphic arts, e-mail him through one of his two websites. Or, if you wish to remain anonymous, send the info to me and I'll pass it on to Michael.

In the meantime, keep on creating.