A little background, here.  A month or two ago, some writer friends and I were having an e-discussion about literary style--which I consider to be grammar, punctuation, spelling, capitalization, sentence and paragraph structure, word choice and usage, etc. The nuts-and-bolts of writing.

During these conversations, we wound up talking a bit about adverbs. (Writers always do.) And anytime you talk about adverbs and their overuse, someone mentions Swifties. Which took us down a whole nother path.

Then, a few weeks after that, Elizabeth Zelvin wrote an interesting SleuthSayers column about adverbs, and in the comments section afterward I mentioned to her the fact that I was thinking about doing an SS post specifically about Swifties. She seconded that idea, and--be careful what you wish for, Liz--here it is. 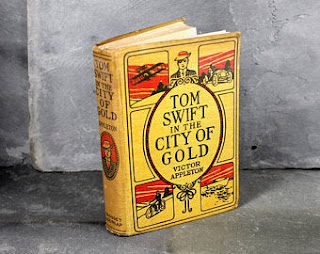 The term Swifty, as you probably know, comes from the popular series of books starring teenaged action-adventure hero Tom Swift, which always seemed to include passages like "Here I come," Tom shouted bravely, or "Dad helped me with my project," Tom admitted modestly. Eventually good old Tom, despite his bravery and modesty, became not only a hero but something of a literary oddity because of that style of writing, and readers began poking fun at all those pesky and repetitive adverbs. It probably began with "We must hurry," Tom said swiftly, or something like that, and soon folks were coming up with goofy phrases like "Let's visit the tombs," Tom said cryptically
and "I like modern art," Tom said abstractly. By definition, a Tom Swifty is a sentence linked by some kind of pun to the manner in which it is attributed. 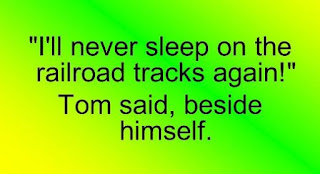 Here's a long list of Swifties I put together, about half of them from combing the Internet and about half from my own not-so-swift brain. I warn you, this kind of thing can get old pretty fast, and although some of these are clever, others are just silly, and some of them you've probably heard or seen before. But I think all of 'em are fun. The ones I like the most are the ones with double meanings and a lot of wordplay. Also, I should mention that Swifties don't have to use adverbs. Whatever generally follows the format and is funny, or quirky, is fair game.

I kept inventing more of them and finding more that I wanted to include, but after considerable frustration I narrowed the list down (??) to 75. By the way, I tried to start with the worst first, so don't bail out too soon. Here we go:

"I got kicked out of China!" Tom said, disoriented.

"I'll dig another ditch around the castle," Tom said remotely.

"I slipped on the hill to Hogwarts," said J. K., rolling.

"Wasn't that Elvis I saw at the party?" Tom Enquired.

"I never get to play the friend," said Willem, dafoe.

"For whom is the bell?" Tom extolled.

"I have no flowers," Tom said lackadaisically.

"Don't let me drown in Egypt!" Tom said, in denial.

"I can see right through my father," Tom said transparently.

"I thought you were Madonna," said the lady, gaga.

"To split infinitives no man has split before," Tom boldly said.

"This too shall pass," Tom said constipatedly.

"Dorothy, if you go to Oz again, I'm going with you," Em barked.

"I hate this food," Tom said, whining and dining.

"I told you I'm not fonda this script," Hank said, madigan.

"It's better to steal things together," Tom corroborated.

"I left my car in Phoenix," Tom said, Joaquin.

"That grizzly is climbing the tree after me," Tom said overbearingly.

"I left the Xena the crime," said Lucy lawlessly.

"I collided with my bed," Tom said rambunctiously.

"Someone stole my movie camera!" Tom bellowed and howled.

"I play a drunk in this movie," said Hugo, weaving.

"She set my car on fire and left me," Burt said, smoky and abandoned.

"No more pastries for me," Tom de-eclaired.

"We don't have a home-run hitter," Tom said ruthlessly.

"That was a tasty hen," said the Roman, gladiator.

"Look at that monster's sandals," Tom said, in a thing-thong voice.

"I will not finish in fifth place," Tom held forth.

"I'll probably do a test drive before the race," Tom prezoomed.

"My car's in the shop," said Christopher, walken.

"Did you steal that sunscreen?" Tom demanded, in a copper tone.

"It's the bawdiest house on the prairie," said Laura Ingalls, wilder.

"This is mutiny!" Tom said bountifully. 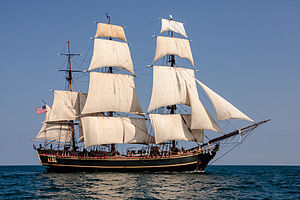 If you're still with me, and if that's not enough . . . the following are my Top Twenty Favorites. Again, some of these I dreamed up in weak moments and others I lifted swiftly from the Web:


"I didn't know I got airsick," Tom said, heaving it aloft.

"I punched him in the stomach three times," Tom said triumphantly.

"Last night I dreamed I went to the movies," Laura said manderley.

"You can be my guest host," said Ellen, to begeneres.

"I like the Venus de Milo," Tom said disarmingly.

"What's that in the punchbowl?" Tom said, deterred.

"I didn't do anything!" Adam cried fruitlessly.

"I'm having an affair with my gamekeeper," said the lady chattily.

"Whiskey gives me gas," Doc Holliday said, with an earp.

"About hot dogs, my dear, I don't give a damn," Tom said frankly.

"One out of ten bottoms is too big for an airplane seat," Tom said asininely.

"These aren't the droids you're looking for," Tom said forcefully.

Okay, so I never grew up. What can I tell you?


("Believe me, you don't want to read the hundreds I left out," John said, listlessly.)

Now . . . what are your favorite Swifties?

See you next time.