The Big Cheese in the White House


by DoolinDalton
According to Vocabulary.com, the phrase "The Big Cheese" has the following meaning in English:

The big cheese is the person who holds the most power in any situation. If you overhear someone at work describe you as "the big cheese," it means that he thinks of you as the most important person in the office.

You might also call someone important the head honcho or the top dog. The idiomatic phrase big cheese comes from a definition of cheese that comes from Urdu, in which chiz means "a thing." The British colonization of India brought English speakers and Urdu speakers together, and one result was the phrase "the real chiz" to mean "a big thing or event." This evolved over time into big cheese.

So you might be forgiven for reading the title of this blog post, and thinking: "This is a political post about the biggest cheese occupying the White House. This is about the president, or at least about a president."

Well, it is, and it isn't. It's actually about an enormous wheel of actual cheese, four feet in circumference, and two feet high, which was given to the metaphorical "Big Cheese," at the time: the sitting president of the United States, Andrew Jackson as a gift.

So I guess you could say this is about that time the "Big Cheese" received the unexpected gift of a "Big Cheese."

Except it wasn't the first time a sitting president of the United States received a huge wheel of cheese as a gift. Thomas Jefferson actually carries the title on this one.

In January of 1802 Jefferson received the so-called "Mammoth Cheese," which served the dual purpose of being both a gift from grateful supporters and also as an abolitionist statement. This block, it was said, was 100% the result of free labor, and the milk of every one of the nine hundred cows in the Massachusetts county that sent it went into its creation.

From the National Portrait Gallery's blog:

The “Mammoth Cheese” was created for President Jefferson by members of the Cheshire Baptist Church from Cheshire, Massachusetts. The cheese weighed 1,235 pounds and milk from every cow in Cheshire—approximately 900 cows—was used to create this colossal cheese. According to the National Intelligencer and Washington Advertiser for December 30, 1801, the cheese arrived in Washington, D.C. “in a wagon drawn by six horses.”  The Mammoth Cheese was so awe-inspiring, that it marks the first use of the word “mammoth” as an adjective spurred by a nationwide fascination with mammoths following the discovery of large prehistoric bones in the new world.

To be clear, Cheshire really was all-in for Jefferson. To say that the county was a center of Jeffersonian support in an otherwise overwhelmingly Federalist state is something of an understatement. Jefferson, after all, received every single Cheshire presidential vote in the election of 1800. There was one vote against him, but that one was quickly thrown out, on the assumption that it had been cast by mistake.

Jefferson was reportedly so moved by this cheesy gesture that he sent pieces cut from the Mammoth Cheese back to the Abolitionist minister who spear-headed the whole exercise, as a token of gratitude. Whether the cheese was still edible by the time it made it all the way back to Cheshire, Massachusetts, however, is not recorded.

Ironically the Big Cheese that Jackson received while he was Big Cheese in the White House (still more generally known at the time by its formal name, the "Executive Mansion.") came to him not from a supporter, but from a New York State booster who was showcasing the rising economic prowess of his state. In fact, said booster, Colonel Thomas S. Meacham of Standy Creek, New York, was reputed to be a supporter of Jackson's perennial rival, Henry Clay of Kentucky.

The 1,400 pound cheese Meacham packed onto a schooner in 1835 and sent by water all the way to Washington was actually one of six massive wheels of cheddar cheese which made the rounds at local county fairs that year. The locals, many of them Jackson men, hit upon the idea of sending one to Jackson, because, well, Jefferson had gotten one, and Jackson, being a member of the party Jefferson had founded, ought to get everything the Sage of Monticello had gotten out of serving as his country as chief executive (no mention is made of the crippling debt into which Jefferson put himself–or should I say, "into which he put himself deeper," since he was already in debt when he took office–during his eight years as president. Apparently the notion that "Everything Jefferson got, Jackson is due" only extended so far.).

Jackson was reportedly delighted by the cheese, especially the sheer size of it. But as could be said of many aspects of his presidency, Jackson seems to have been at a loss as to what to actually do with the cheese once he had it. So, as if by default, this wheel of cheddar found a home in a particular room in the White House, where it spent an entire year aging.

Not to put too fine a point on it, but the city is famously built on swampland. It's also hot and humid for a goodly part of the year. Ever seen cheese in a humid room? It sweats. And if left there long enough–like, say, a whole year–it begins to stink.

Finally, in February of 1837, with less than a month left in office, Jackson hit upon a way to dispose of this by-now funky block of over-ripe cheese. As he had done when he was inaugurated in March of 1829, he had a big party, and invited the public into the Executive Mansion to partake of his questionable bounty.

As with Jackson's inauguration party, it did not go well. After Jackson's inauguration, there was so many members of the public eager to see and touch all the wonderful things in the White House, that they completely trashed the place. Breaking windows, stealing "souvenirs," including whole pieces of furniture. The only way the staff were able to finally get all of these partygoers to quite the building was to set up bowls filled with alcohol out on the lawn.

This time around, though, it was the cheese, not the guests, which stank up the joint. As a correspondent for The Portsmouth Journal of Politics and Literature reported, when the cheese was cut, "there arose an exceedingly strong smell, so strong as to overpower a number of dandies and lackadaisical ladies." 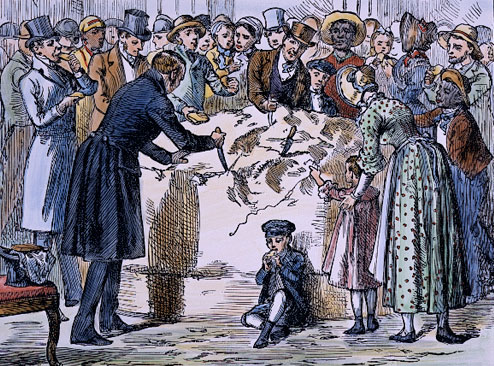 One contemporary later recalled of the event:

For hours did a crowd of men, women and boys hack at the cheese, many taking large hunks of it away with them. When they commenced, the cheese weighed one thousand four hundred pounds, and only a small piece was saved for the President’s use. The air was redolent with cheese, the carpet was slippery with cheese, and nothing else was talked about at Washington that day. Even the scandal about the wife of the President’s Secretary of War was forgotten in the tumultuous jubilation of that great occasion.


Even after its demise the cheese lingered, its smell hanging about the White House, and noticeable for several blocks in any direction. Described in one account as "an evil-smelling horror," the odor lasted into the administration of Jackson's hand-picked successor, Martin Van Buren.

I guess you could say that, as with so many other aspects of his in many ways disastrous presidency, Old Hickory left this particular mess for Van Buren to clean up, too.

Van Buren, unable to escape the Panic of 1837–the hangover which followed on the heels of Jackson's ruinous economic policies and effectively wrecked Van Buren's presidency before it even began–was, however, able to exorcise of the ghost of Jackson's Big Ol' Wheel O' Cheddar.

As a senator's wife laid it out in an 1838 letter, no sooner had Van Buren rid himself of the stench, than the cycle repeated itself:

The White House has been put in order by its present occupant, and is vastly improved – (Van Buren) says he had a hard task to get rid of the smell of cheese, and in the room where it was cut, he had to air the carpet for many days; to take away the curtains and to paint and white-wash before he could get the victory over it. He has another cheese like that which General Jackson had cut, and says he knows not what to do with it. What a foolish thing for a man to have made such a present to him or anyone else.

Whether Van Buren ever again ate a piece of cheddar (or camembert, or gouda, or...or...or...) is not recorded. Wonder what he did with the new wheel? It would have been a short roll down to the Potomac at the time. Hmmm....

So anyway, there you have it!

See you in two weeks!
Posted by DoolinDalton at 05:21