"You're starting in the wrong place" is something I've told many an editing client. Sometimes authors start their books or short stories too early in a scene, trying to show too much of the normalcy of the world we're entering. It's a good goal, but you can't do too much of it or else you risk the reader becoming bored, waiting for something interesting to happen. So if you start your story too early, you might need to chop off the first few pages. Or chapters.

I recently told a client when I read her sample pages that I didn't know where her story started, but I suspected it wasn't in the first two chapters I had read, which were all backstory. I told another short story author a few years ago that the reader didn't need to see the main character growing up. Let us learn about the relevant parts of her life when they become necessary to the story, but start the tale where the action is. She lopped off the first seven pages—the first seventeen years of the character's life—and the story was all the better for it. 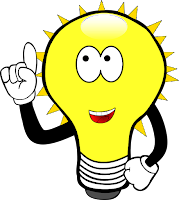 It was a lightbulb moment. The opening scene hadn't been working because I'd felt the need to show several aspects of one of the main character's personality because of where the action was happening. In that setting, he definitely would be reacting by thinking several things—too many things—and that was causing the pace to be too slow. But now that I've figured out a better setting, I can trim away all those extraneous thoughts and allow the meat of the story to come so much sooner. By starting in the right place literally, I am allowing the story to start in the right place for storytelling purposes too.

As SleuthSayers columns go, I know this is pretty short, but I hope my insights will be helpful to you as you write. And I'd love to hear your thoughts about starting out your stories, both how you decide where in the storytelling to start as well as where to set that opening scene.
Posted by Barb Goffman at 00:00