Bringing in the wet dog, my pal Carole made a joke about Odorama - the provenance here being that she's a Baltimore girl, and Baltimore native son John Waters used a gimmick in his more-or-less mainstream debut, Polyester, that was a scratch'n'sniff card, smells keyed to scenes in the movie. 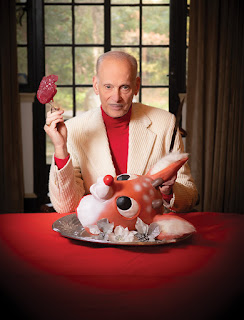 Lest you think this utterly without precedent, think again. John Waters, like Tarantino and Martin Scorsese, is very much a movie nut, and knows his history. Tarantino might champion Sergio Corbucci and a picture like The Great Silence, Scorsese is of course hugely influential in the preservation of significant landmark pictures, many of them marginalized or forgotten. It's no less serious of John Waters to find inspiration in the movies of a Russ Meyer or William Castle. 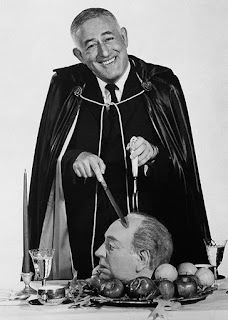 Russ Meyer was, famously, a schlockmeister. You could argue that Faster, Pussycat! Kill! Kill! is at least on some level a masterwork, but it's still trash. Terrific trash, maybe. On the other hand, Shock Corridor or The Naked Kiss it ain't. Meyer doesn't even come close. Sam Fuller made his share of exploitive B's, but he always had thorough discipline. Russ Meyer, let's be honest, was only in thrall to the great state of mammary. 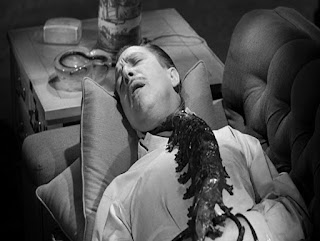 William Castle is a different story. His career begins in the late 1930's, and lasts into the 1970's. A lot of it is pretty lame; some of it is eye-popping. He was on Welles' Lady from Shanghai. Twenty years later, he bought the rights to Rosemary's Baby, but Paramount wouldn't let him direct - they thought his track record with quick-and-dirty horror would hurt the word of mouth on an A-picture. 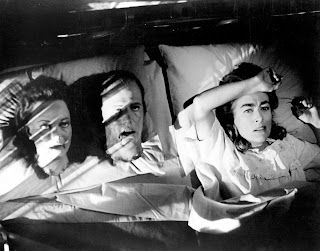 So, those horror movies. This is where Castle hit his stride. (He's actually contemporaneous with the glory days of Hammer gothic, Christopher Lee and Peter Cushing.) The first was Macabre, in 1958, and it was the first where Castle used medicine-show marketing. Along with your ticket, you got an insurance policy from Lloyd's of London: IF IT FRIGHTENS YOU TO DEATH - YOU'LL BE BURIED FREE OF CHARGE. The House on Haunted Hill, Vincent Price, where the theater went completely dark and the spooky soundtrack started before the picture did. And a plastic skeleton dangled over the audience (Castle pitched this as Emerge-O).  Then his second picture with Price, The Tingler. The Tingler had an even better device: a few of the seats in the theater were wired for a slight tingling effect, which signaled that the parasitic creature was creeping up your spine - and at which point the ushers were supposed to scream. You see the pattern, here. Even as late as Strait-Jacket, his Joan Crawford ax-murderer picture, he passed out party favor tie-ins, cardboard axes smeared with stage blood. 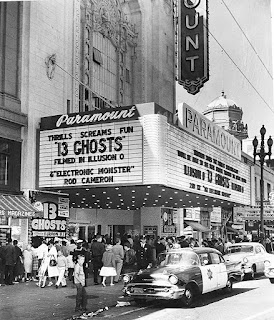 My personal favorite of Castle's movies is Let's Kill Uncle, which came out in 1966, and is apparently not really considered part of the canon. Maybe because Castle often used name Hollywood actors whose fires were no longer burning bright, like Crawford and Vincent Price, those pictures have a certain camp acidity, and they're not to be taken entirely seriously. Let's Kill Uncle, however, has the great Nigel Green, deliriously over-the-top, as the retired SAS commando major out to  murder his nephew for the kid's inheritance. And the shark in the swimming pool. 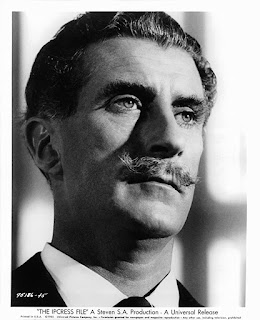 Castle himself never tried Smell-O-Vision (used but once, Scent of Mystery, 1959) or AromaRama (Behind the Great Wall, same year), so the mischievous sniff test of Odorama John Waters releases in Polyester is more of an homage, Castle-esque rather than a direct application of the Castle merchandising touch. It's satisfyingly retrograde. 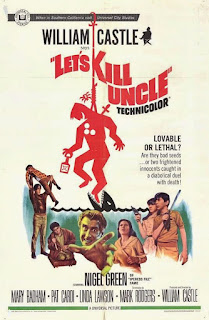 Clearly, there are advances which work. Sound, and color. Widescreen, or Dolby digital. 3D is back, not a novelty this time, but here to stay. Smell is of course evocative. They say the most of all our senses. It's probably genetically hard-wired. Who argues? Maybe there's a way to do this. Easy enough to make a theater seat vibrate, after all, to rumble underneath you, or even tip left and right with the G-forces, so you're in the cockpit with Maverick. On the other hand, we'd probably need warning labels, like a product containing peanuts. You get to choose, 3D or flat, subtitles or dubbed, earthbound or zero gravity, scented or fragrance-free.

[In a cute piece of stunt casting John Waters actually got to play Castle in the miniseries Feud, about the rivalry between Bette Davis and Joan Crawford surrounding Whatever Happened to Baby Jane? In an Oklahoma publicity appearance for Strait-Jacket, Crawford "decapitates" Castle.]

The 1993 movie MATINEE features John Goodman as a William Castle-like horror movie promoter during the Cuban missile crisis. Anyone interested in Castle's particular brand of film and promotion should see this flick.

Good posting. Lot to like in those movies. Jerry's right about MATINEE. I enjoyed that one.

Loved this post. And thanks, Jerry, for the heads-up about MATINEE.

Some fun movies, David. My wife loves The Tingler. It's one of her childhood movies. And ditto on Matinee. Fun, fun movie!

I remember The Tingler! And the House on Haunted Hill. So many schlock movies back then. But my favorite is still The Blob with Steve McQueen - the Blob looked exactly like my mother's blackberry jelly, on a large scale...

Eve, I LOVE the original THE BLOG with Steve McQueen and John Belushi (the little boy). And THE TINGLER.

But we know what you mean.

+1 for Mantinee. Didn't Castle pull off some stunt with Hitler?

I attended a seminar, one of only a couple of guys among a number of community women. To my surprise, they began talking about Russ Meyer in glowing tones. I said, "Russ Meyer… the, uh, movie purveyor?"

"Yes!" they happily gushed, and left me wondering what planet of the Vixens I'd happened upon.

Disney's Epcot featured pumped-in scents, here and there. The only two I can think of offhand are defunct, GE Horizons, that scented miniature orange groves with bitter orange scent, and GM Motion, where Rome burned with an acrid smell.

Seats can be rigged, most notably in the Tree of Life Theatre in Animal Kingdom. You might feel a slight spray of mist or feel a gust of air under your seat.

Russ Meyer? I still don't get it.