COVID19 in America versus Canada

Anger is the biggest difference between America and Canada’s response to the coronavirus pandemic.

Many people have been discussing the difference between the response to the coronavirus pandemic by the United States and Canada. “When you look at per capita cases and deaths across the course of the entire outbreak, the comparison looks even worse: the United States has over two times as many confirmed coronavirus cases as Canada and roughly twice as many deaths.”

The factors impacting coronavirus infections and deaths in the two countries are complicated and will, I’m certain, be analyzed for years.

While both countries are grappling with how to open up the country and help the economy recover, the stories in the two countries couldn’t be more different. As they say, a picture is worth a thousand words. 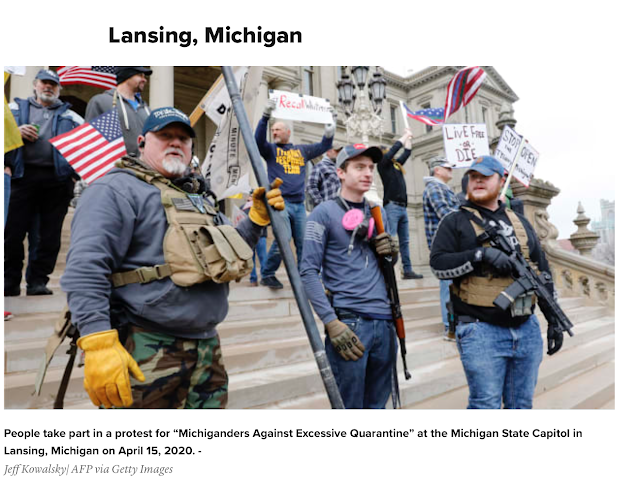 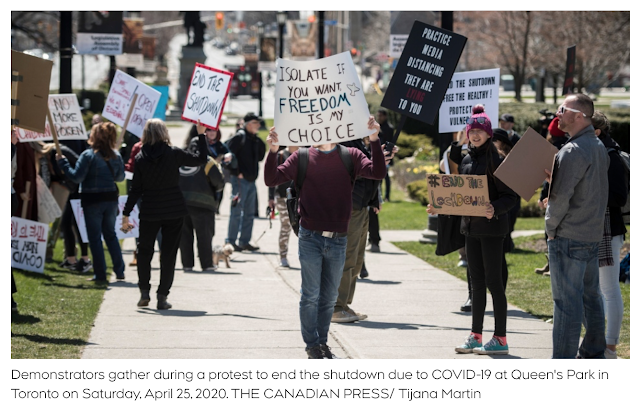 One obvious difference is that in Canada, we are not allowed to openly carry guns. However, aside from the guns, the differences are crucial and it is in the level of anger and intimidation in the United States.

In Ontario, my home province, the Premier responded to the protests by saying: “Ontario Premier Doug Ford says he’s furious at the “bunch of yahoos” who decided to flout physical distancing measures and emergency laws to protest outside Queen’s Park Saturday afternoon, calling them “irresponsible, reckless and selfish.”

For those who don’t speak Canadian, this is a very, very angry statement by a Canadian Premier. Also - he suggested consequences: “He said he hoped Toronto police would ticket them.
Not keeping at least two metres apart from someone not in your own household currently carries a fine of $880 in Toronto.”  In the end however: “A spokesperson for the Toronto police said no arrests were made and no tickets were issued following the protest, saying the crowd was compliant and exercised good social distancing.”

In other words, fairly polite and compliant protesters.   It is more than not carrying guns.   The politeness of Canadians has long been a joke among Americans. Although generalizations are never universally true, there may be something to this. However, there is one picture that explains a great deal: 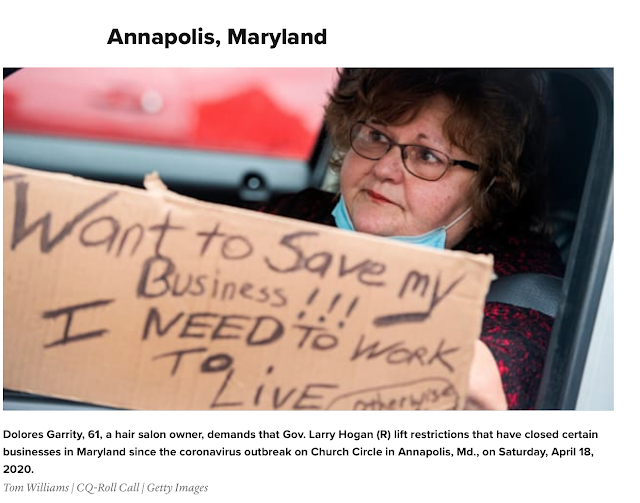 In the United States, people are out of work and losing their healthcare and the financial assistance given appears to be piecemeal -both federal and state assistance- and many appear to be falling through the cracks.

In Canada, our universal healthcare system means that everyone remains covered for healthcare regardless of their employment status.

The federal government has delivered a strong set of financial protections for employees, self-employed, seniors and students. For example, if you are self-employed and have lost your job, you receive $2,000 per month for 4 months. These financial safety nets during COVID19, allow people to put food on the table. The provinces have all stepped up with other financial supports for citizens.   In short: it is far easier to be less angry about the financial impacts of COVID in Canada than in the United States.

There is more though. In Canada, there has been coordination between all levels of government in another area: information.

Our press conferences have been focused on Medical Officers of Health (federal and provincial) giving updates on infections, looking at models and doing the crucial work of informing the public about the new knowledge of this virus. This serves to increase scientific literacy in general. For example, prior to this pandemic, some Canadians did not understand that a virus cannot live outside of a cell for long and that is the reason for physical distancing.

The news in the United States has covered the politics of this pandemic and the disagreements between levels of government and within government. This type of coverage in Canada would be rather short - because there is general agreement about the need for physical distancing and to stay at home to defeat this virus.

So the difference in the two countries could not be more striking. In the United States the coronavirus has been a magnet for political anger. In Canada there is some of that certainly, as evidenced by the protests, but they have been small because, largely, our politicians are not fuelling them.

A virus has no politics, knows no party affiliation. It simply infects and kills. The wartime analogy has been used to describe the fight against this virus but this appears to be a strange war in the US, where there is little agreement if the enemy is dangerous, how to fight it or whether to bother fighting at all.

So, while Americans are dying, they appear to be very angry with each other. I wish they would get angrier at the virus.
Posted by Mary Fernando at 00:41