by Joseph D'Agnese
I think there’s an argument that we’re all turning into Flitcraft. You remember him, don’t you? He was the everyman character mentioned briefly and so enigmatically about a third of the way into The Maltese Falcon. Flitcraft was at the center of a missing person job that stayed with Sam Spade long after the job tied up.

Spade shares the tale from his past with Brigid O’Shaughnessy in Chapter 7, while the two of them are waiting in a hotel room for Joel Cairo (aka Peter Lorre) to come over. It’s a story that has delighted and puzzled mystery lovers for ages, since the anecdote seemingly comes out of nowhere and doesn’t dovetail neatly with the rest of the plot. Hammett is known for being such a spare, tight writer, so he must have had a reason for sticking this bit in. So goes the argument.

I’ve read dozens of articles, academic or otherwise, about the so-called Flitcraft Parable over the years, and the analyses differ greatly, depending on who’s doing the thinking. That’s part of the Parable’s charm. It’s like Melville’s white whale—overdetermined as hell, and deeper, richer, fuller in nuance than any of us can imagine. Mostly, the Flitcraft Parable gets you thinking about how humans react to mortal peril, which, call me crazy, sorta kinda fits the zeitgeist.

Flitcraft left his real-estate office in Tacoma one day and disappeared. When Spade finally tracked him down, the poor sap confessed why he suddenly abandoned his job, wife, two kids, new Packard, and country club membership in Tacoma. All it took was a brush with death. A near miss.

Out on that street in Tacoma, Flitcraft narrowly missed being squashed flat by a falling beam from a nearby construction job. The beam took out a chunk of sidewalk, and sent a concrete chip into his cheek, leaving a scar. If I may oh-so-melodramatically surmise, in a flash Flitcraft saw that the life he was living was a pathetic sham. He was not the man he ever wanted to be. If life could be snuffed out so unpredictably, well, damn it, he was going to Stop Living the Lie! From this moment forward, he was going to do things differently. Get back to his roots. He was going to shake things up. 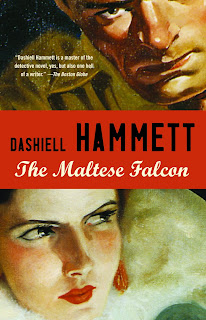 Sort of the way I was going to do six weeks back when my wife and I decided to grow our own food in the garden. Supermarket shortages be damned! We didn’t need to play the industrial food game! We’d fill our bellies with nutrients coaxed from the earth by our own two hands. That was right before we learned that the nation was facing a shortage of garden seeds.

No problem! We’d bake our own bread. Guess what? Remarkably, the nation is facing a shortage of flour and yeast. Well…okay, maybe we’d raise chickens the way we’d always talked about doing. Henceforth, we former big-city types were going to transform ourselves into rustic homesteaders! We’d gorge ourselves silly on golden-brown frittatas while we played jigsaw puzzles at night, mended our frayed garments, and exercised obsessively. Oh, and the whole while I’d grow myself a luxurious lockdown man-beard.

Well, you can imagine how that all played out. For every single thing I contemplated doing as an expression of my highly personal, spanking-new creative identity, everyone else on the planet was thinking of doing exactly same thing, causing runs on everything from backyard chickens, to jigsaw puzzles, to sewing supplies, to exercise equipment. And experts were reminding newbie beard-growers to disinfect their new scruff before they hugged loved ones.

Don’t get get me wrong. This pandemic is radically altering many people’s lives and careers. My state has never seen so many unemployment claims, as is yours, I’m sure. Businesses in our lovely mountain town have been devastated by the lack of tourists who were historically their biggest class of clientele. Brewers, tour guides, chefs, bartenders, and baristas are out of work, and desperate. Already I’ve heard of a local businessman, a dear friend, who is considering shuttering his shattered business and moving to Europe with his young, EU-born wife, especially if a certain politician is reelected in the fall. People like my friend are going full frontal Flitcraft: disaster sparks change.

The rest of us are flirting with Flitcraft Lite. Near disaster sparks change of a sort. Change, I might add, that may not outlive the pandemic. After all, the final biting irony of Hammett’s parable is that after resolving to change his life, Flitcraft ended up replicating exactly the same life he left behind. In his new life in Spokane, Flitcraft had set himself up in a successful car dealership, with a lovely new wife who was expecting their first child. Spade’s assessment of the outcome is marvelous:

His second wife didn’t look like the first, but they were more alike than they were different. You know, the kind of women that play fair games of golf and bridge and like new salad-recipes. He wasn’t sorry for what he had done. It seemed reasonable enough to him. I don’t think he even knew he had settled back naturally into the same groove he had jumped out of in Tacoma. But that’s the part of it I always liked. He adjusted himself to beams falling, and then no more of them fell, and he adjusted himself to them not falling.


I’m probably distorting the crux of Hammett’s parable, but the beams sure are falling big time right now. And I think there’s some truth to the notion that we humans are binary creatures. We are at heart either changing, or not. From an evolutionary perspective, true behavior change is time-consuming and dangerous. If you’re a Neanderthal hunter of big game, the tribe will go hungry while you learn how to hook and land your first coelacanth.

In the wacko HBO sci-fi series Westworld, based on the old Michael Crichton film from the 1970s, nefarious engineers conspire to implant the behaviors of real-life people (“guests”) into robot doppelgängers (“hosts”). Imagine! Your body dies, yet your brain lives on in a robot. A chance to live forever! A chance to live the life you were always meant to have. A chance, dare I say, to Shake Things Up!

Thing is, late in the second season, the mad geniuses discover to their horror that the zillionaire they brought back to life makes the same boneheaded decisions he made in life. Conclusion: Humans don’t change.

I understand the instinct of the individual to revert to previous behavior. I totally get that. I’ve made and abandoned far too many New Year’s resolutions not to. But what I am finding fascinating is the herd instinct toward sameness even in what is theoretically a very personal and trying moment of change. Somewhere in our DNA, the survival code is apparently written thusly: <alone:same> and <species:same>.

In a million lifetimes, a million simulations, O’Shaughnessy will always double-cross Spade, and while the thought of it probably makes our antihero a little sad, he’s expecting it.

In a million pandemics, a million Americans—hell, a million urbanites, suburbanites, Canadians, Minnesotans, D’Agneses, or genetically-enhanced, intelligent rutabagas—will all tend to make the same choices when their world is upended. They will panic-buy jigsaw puzzles and toilet paper. They will resolve to be better people. They will hug their children close, and privately wish they’d go back to school.

I’m sure that in one of those robot simulations, O’Shaughnessy is wearing a homemade shift dress and collecting free-range eggs out of a nesting box. But not for long. When the beams stop falling, she will revert to form, snatch up a gat, and come gunning for some unsuspecting sap. No wonder Spade drinks, and why I need one too.

Postscript: Mexico and Canada recently ratified the USMCA, a new pact the cheeky are calling NAFTA 2.0. I am not an attorney, but it appears that this joint legislation goes into effect in June 2020. When it does, I believe this means that Hammett’s book, currently in the public domain in Canada, will no longer be. (I am waiting for someone with actual expertise to weigh in on the matter. Lawyers, please speak up.) However, dedicated mystery fans should bear in mind that because of the public domain declaration, countless crappy paperback and ebook versions of this classic novel are flooding the Interwebs. Most of these versions were poorly produced; their “publishers” simply scanned copies of the paperback, and uploaded them to various retailers without bothering to proofread them. Please don’t buy these editions; if the reviews are any indication, you’ll be greatly disappointed by the quality. The only authorized editions are the ones published by Vintage Crime/Black Lizard (ie, Penguin Random House). This page will direct you to the correct edition at the retailer of your choice. And of course, the official prices of the authorized book are much higher than the bootleg editions. But come on. Did you really think you could grab the Falcon for 99 cents? Don’t be a palooka.
Posted by Joseph D'Agnese at 00:00