I have mentioned before that Roddy Doyle is my favorite living Irish writer.  He doesn't write crime fiction - although he has come close.  He does write contemporary fiction, historical stuff, children's lit, and an amazing biography of his parents.

For several years he has also been recording conversations about current affairs between two mates in a pub.  When we were in Dublin last summer we saw the play version at the Abbey Theatre.  Now, thinks to Irish Radio RTE you can hear those same actors performing the Two Pints as they cope with the lockdown.  (And they seem to have anticipated a suggestion made by our own president.)

Recently on Facebook, Eamon Doyle (I don't know if they are related) had a complaint about the three published books of these conversations: The stupid alphabet dictates that I shelve Roddy Doyle's TWO PINTS, TWO MORE PINTS, and TWO FOR THE ROAD in reverse chronological order. It drives me nuts. If only I had some choice in the matter.

As a recovering librarian, Eamon, I feel your pain.  But that got me thinking about putting books in proper order.

Take Isaac Asimov's Foundation trilogy.  It was once voted the greatest series in science fiction history.  The books belong in the same order whether you put the titles alphabetically or chronologically, and yet people often file (or even read!) them in the wrong order.  Can you see why? 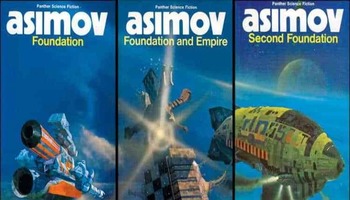 Decades later Asimov wrote more Foundation novels which ruined the alphabeticalitude, so we shall ignore them.


What about our own field?  Are there examples of mystery series being published in alphabetical order?

Yes, of course you are right.  Sue Grafton has that covered.

And the series below is listed in chronological order.  (Keep in mind that in libraries initial articles are ignored.  A Study in Scarlet and The Sign of Four both file under S.)

Raymond Chandler started another Marlowe novel which was finished by Robert B.Parker and published as The Poodle Springs Mystery. So even that one kept the pattern up.

Can you think of other examples of mysteries  where the alphabet and chronology match up?