I fell into a familiar comfort zone this past weekend, and watched Smiley's People again. I needed something reliable and even stately, after the random disturbances of late. 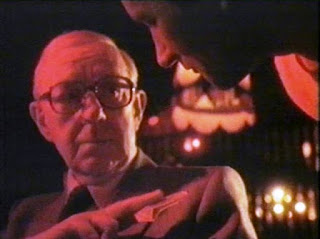 George Smiley was introduced in Call for the Dead (filmed in 1967 as The Deadly Affair), but he slips out from the wings, almost apologetically, and takes center stage in the Karla trilogy: Tinker, Tailor, Soldier, Spy; The Honorable Schoolboy; and Smiley's People. He has a couple of curtain calls later on, but they're essentially cameos.

Smiley's been played by James Mason, Denholm Elliott, and Gary Oldman. For most of us, including John le Carre, Alec Guinness holds the crown. Nor has le Carre been poorly served, for the most part, by the movies. Deadly Affair and Spy Who Came in from the Cold are both excellent. On the down side, the feature film iterations of The Little Drummer Girl, The Russia House and Tinker, Tailor aren't as successful - probably due to the necessities of compression. A Wanted Man and The Tailor of Panama fall somewhere in the middle. The books work better as TV miniseries, when they're given room to breathe. Not that the long form is foolproof. A Perfect Spy and The Night Manager both suffer from being over-faithful and leaving in too much. 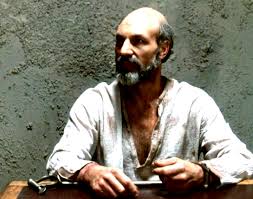 Which is where the BBC/Guinness versions of Tinker, Tailor and Smiley's People seem so exact, rigorous narratives that still allow for silence, melancholy, inhalation, even the appearance of accident, although no detail is accidental in George Smiley's world. "Topicality is always suspect," he says, in Tinker, Tailor. In other words, when you buy intelligence product, it pays to be skeptical if the product fits your needs too perfectly. And he's of course proven right: the Witchcraft material is manufactured, it's been carefully massaged to send all the wrong signals.

My particular weakness for Smiley's People is I think due to its structural integrity. It doesn't have, for example, anything like the extraordinary supporting turn by Ian Richardson as Bill Haydon - although Bernard Hepton as Toby Esterhase comes close. It simply seems all of a piece. 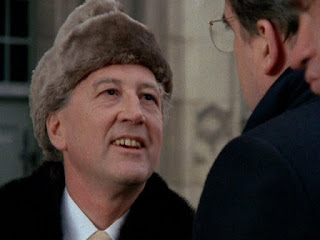 Originally, the producers meant to follow the story arc of the complete trilogy, starting with Tinker, Tailor, following with Honorable Schoolboy, and wrapping with Smiley's People. Schoolboy apparently presented production difficulties, and they skipped it. Quite honestly, Schoolboy is the weakest of the three books, but more to the point, Smiley isn't in fact the lead actor. It makes dramatic sense to move on to book three. (It actually took five years in between.)

When it was first shown on the BBC, radio guy Terry Wogan ran a weekly feature called, "Does anybody know what's going on?" Let's storyboard Smiley's People out. 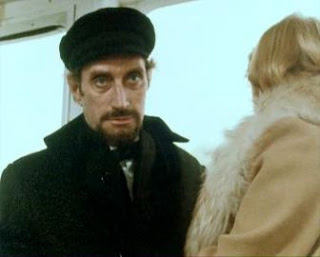 The old lady in Paris writes the General in London. He, in turn, takes a bullet in the face on Hampstead Heath. George, the old man's former vicar, is called in to clean up the mess and put the whole thing to bed. George smells a rat. What is it Toby Esterhase tells him? Karla is looking for a legend for a girl (a legend, in the jargon, is a manufactured biography, a cover story). And with only this to go on, George begins to tease out the plot.

The plausible back-story, the collateral. Otto's pal in Hamburg, the sex-club owner. The spymaster's mistress, and her hidden child. The secret Swiss bank account and the fumbling Russian diplomat in Bern. The long coat-tails of KGB's foreign operations, and why in this particular instance the organs themselves can't be trusted. 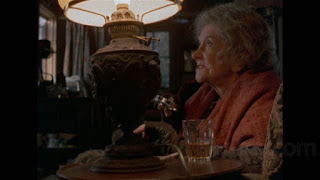 Of course it's a tangle. How not? The method is that we learn only as much as George learns, although he might very well be a step ahead of us, from habit and his larger experience. But how he proceeds has a firm logic. Toby, then Connie Sachs, which leads him to Claus at the club in Hamburg, to the kids house-sitting Otto's place, and the campground, with Otto's boat moored in the shallows and the music unbearably loud, to drown out the torment.

The formality, the inexorability, makes it all the more satisfying. Smiley gathers his resources, and closes his hand. The title is a pun, not simply Smiley's crew, his favored inside team, but his people in the sense that Kipling used it, Mine Own People, Great Britain and the British. There isn't much of the moral relativism le Carre is sometimes faulted for. Smiley's defeat of Karla isn't ambiguous, in spite of the cigarette lighter Karla discards on the cobblestones. The win is personal. 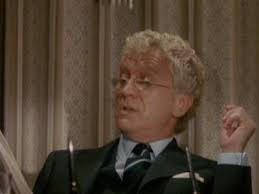 Smiley, then, represents a certain kind of Englishness. Decent and disciplined. The war generation, We Happy Few. They took on Hitler, and then fought the Cold War. "Survivor of every battle since Thermopylae," Connie Sachs says. Le Carre himself might smile, and shake his head, to imagine George characterized that way. But he's said in the past that a country's spy services reflect the nation's character. Mossad, KGB, MI-6, CIA. The way they conduct operations reveals their inner nature and their calculation of political gain or loss. 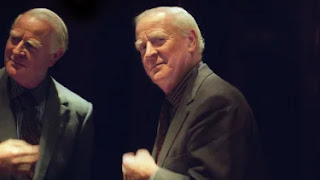 David, it's fascinating to go back and read or watch these again. The stories hold up over time.

Alec Guinness was such a great actor. He really was responsible for much of the success of Tinker, Tailor.

I always think of Alec Guinness when I think of George Smiley. Wonderful performance, wonderful series.

Le Carre said he abbreviated the intended longer series down to a trilogy because after watching a bit of the filming of Tinker he found that Smiley in his head was morphing into Alec Guinness. The perils of hiring a great actor, I guess.

For Le Carre fans jonesing for more of this type of book I would like to recommend the Slow Horses series by Mick Herron, which read as if Le Carre has been edited by, say, Douglas Adams (but without Adams's fantasy elements). The Slow Horses are the MI5 agents who have screwed up and been assigned to a dump called Slough House to do busy work, in the hope that they will get bored and quit. Naturally they discover major conspiracies and have to find ways to get the bosses to believe them... The second book, DEAD LIONS, won the CWA Gold Dagger.

Robert,
I enjoy the Mick Herron series, and I'd also recommend a guy named Dan Fesperman.

I agree about liking Spy-Cold and Smiley's People. Whilst conceding your mastery of the genre, I detested Panama but really liked The Night Manager. Perhaps the satisfying ending made the difference for me.

My experience with Spy Who Came in from the Cold strongly affected my take of the movie. I saw it with a blind girl, where upon I whispered settings and characters as she followed the dialogue. I left feeling bleak, but she got it, perhaps better than I.

BTW, I stumbled upon an excellent Netflix Australian spy series called The Secret City. I spotted a couple of virtually unnoticeable plot holes. (Why did he/she do/not do this/that when they had the chance?) Over all, I really enjoyed it.