When I sent out my call for stories for Crime Travel, the crime/time-travel anthology I edited--coming out this Sunday from Wildside Press--I eagerly wondered what ingenious methods of time travel the submitting authors would come up with.

They did not disappoint.

Sadly, no one used a flux capacitor and a DeLorean, the magnificent means of time travel from the wonderful eighties movie Back to the Future. (And I didn't even need a time machine to see that movie in the theater when it came out. I was in high school, just like Marty McFly.) But the authors whose stories I accepted did come up with interesting means of temporal transportation, some a bit conventional, others ... well, let's take a look.

In addition to pods and wristbands and watch-like devices, the Crime Travel authors used: sneezing (Anna Castle has one hell of an imagination); a particle-beam weapon (because, why not?); a closet (my closets just have clothes in them--so disappointing); a clear-walled cube with barber chairs with seatbelts (gotta have safety measures when you're traveling through time); a gold circlet (it's a hair accessory and a time machine all in one; talk about making it work--Tim Gunn would be so proud); and two elevators. Two of 'em. (Linwood Barclay may have a new book with elevators that send people to their deaths, but we have elevators that send people through time!)

One method of time travel used in the book is so unusual but cool that I don't even know how to describe it outside of its story's context. Eleanor Cawood Jones ... care to take a whack at that description? And in Art Taylor's story ... was it the pendant, Art, or the candles or a mere touch of the hand that set things in motion? Maybe we should leave it for the reader to decide. And in David Dean's story, well, sometimes you just have to want something bad enough.

As for me, I used a bicycle, an all-white one that only appears on the anniversary of mistakes--things that wrongly happened in its family's past that the bicycle thinks someone needs to go back in time to fix. (Don't look at me like that. If a bicycle can travel through time, it also can think.) A few months before I wrote my story, "Alex's Choice," I saw a picture of an all-white bicycle with beautiful flowers in its basket. That image stuck with me, and I decided to use the bike in my time-travel story.

I would have thought that's all I had to tell you about my decision to turn a bicycle into a time machine until this past week when I saw a new commercial for Xfinity using the cuddly alien E.T. from the classic movie of the same name. In the ad E.T. returns to Earth to visit Elliott. The long version of the commercial (available here) shows grown-up Elliott's kids riding their bicycles into the sky with E.T., just as the kids did in the movie way back in 1982. I don't think I've seen E.T. since the summer it was out in the theater, yet that scene with the kids riding their bikes into the night sky must have stuck with me because in "Alex's Choice" the bicycle flies too, and at night to boot. 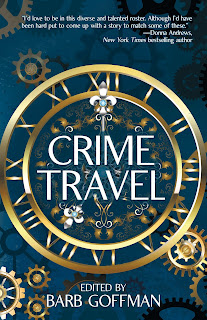 That's the beauty of fiction--be it short stories or novels, movies or TV shows--when done right, fiction can take you to another time, be it in your imagination or your memory or even to something you didn't realize you remembered. I hope the stories in Crime Travel do that for you.

The anthology's official publication date is this Sunday, December 8th, which is Pretend To Be A Time Traveler Day. The book will be on sale in ebook, paperback, and hard cover. I'd be honored if you'd time travel with us to past decades and even past centuries. I'm confident you'll enjoy the ride.

And if you're in the Northern Virginia area, please come to our launch party this Sunday at Barnes and Noble, 12193 Fair Lakes Promenade Dr., in Fairfax. The event will run from 1 - 3 p.m. Authors James Blakey, Eleanor Cawood Jones, Adam Meyer, Art Taylor, and Cathy Wiley will join me to celebrate. We'll  talk about our stories and our inspirations and some of us might even dress up in the time period of our stories as we pretend to be time travelers. Eleanor dressed as a 1960s flight attendant? James as a 1950s PI? Adam as a 1980s security guard? And Cathy ... well, that's going to be a surprise you'll have to come to see. Other than actual time travel, I can't imagine what would be more fun than that.
Posted by Barb Goffman at 00:00