In Ottawa we celebrate maple syrup season by trekking out to a sugar bush, watching the maple sap being collected and indulging in large stacks of pancakes smothered in maple syrup at one of our many sugar shacks.

So, when Leigh Lundin suggested I write about the Canadian maple syrup heist, I thought ‘heist’ was a strong word for people running through the maple grove stealing buckets of sap.

It turns out that I was wrong, a heist it was: over twelve months, 3,000 tons of syrup, worth $18.7 million, was stolen. None of this was done by stealing buckets collecting sap. Worse, learning about this heist ruined all my lovely and naive sugarbush experiences and I’ll never look at another bottle of maple syrup the same way again.

The heist was possible because of three important facts that blew my preconceived notions about maple syrup out of the water.

First, "maple syrup comes only from the red- and sugar-maple forests found in the upper right-hand corner of North America, just where you’d sign your name if this were a test." This means that Canada, particularly the province of Quebec, produces 71% of the world’s maple syrup.

Second, since 1966 the Federation of Quebec Maple Syrup Producers has instituted quotas and rules that have increased the price of maple syrup to be, in 2016, "valued at just over $1,300 a barrel, 26 times more expensive than crude"’

Third, to control the supply of maple syrup, "members of the federation—Quebec’s bulk producers are required to join—give their harvest over to FPAQ… Some of it is sold immediately; the rest is stored in the Reserve…In this way, the federation steadies supply, filling the coffers in banner years, satisfying demand in fallow."


So, maple syrup production is not a cottage industry, adorably ensconced in sugar shacks dotting our maple groves. It’s a large profitable industry controlled and managed much like the oil industry. Total value of all maple products in 2018 was $384.4 million.

To give a visual recap:


The maple grove where I thought they stole maple syrup from: 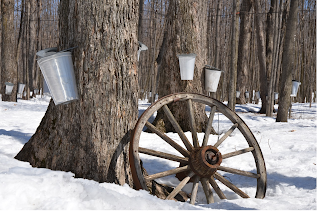 The Reserve is in Laurierville, Quebec, where they actually stole maple syrup from: 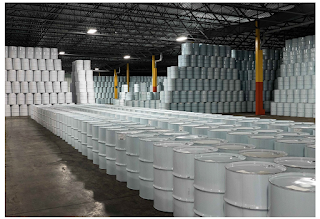 A total of $18.7 million dollars of maple syrup was stolen from the Reserve in Laurierville. The  thieves used trucks to transport barrels, siphoned off the maple syrup, and refilled the barrels with water and returned them to the facility. Later the thieves siphoned syrup directly from the barrels in the Reserve and left them empty. The stolen syrup was then sold in the United States and in New Brunswick, Canada, to distributors, many of whom were unaware it was stolen.

When the theft was discovered in 2012, the Sûreté du Québec police began an extensive investigation aided by the Royal Canadian Mounted Police (RCMP) and U.S. Customs. The police arrested two alleged ringleaders and 24 other people. A large portion of the syrup would ultimately be recovered.

However, this not the end of the story because it raises interesting questions about the Federation of Quebec Maple Syrup Producers.

One of the ring leaders was Étienne St-Pierre, a maple syrup buyer from Kedgwick, New Brunswick, who bought the stolen syrup.

"You can't prove what tree the syrup came from," St-Pierre told the jury.

“St-Pierre also admitted he had long been an opponent of the Federation of Quebec Maple Syrup Producers, and resented their control of the market.

“The Crown produced evidence suggesting St-Pierre considered the federation to be akin to the Mafia.”

Is the Federation of Quebec Maple Syrup Producers like a maple syrup mafia? It is “a powerful marketing board with almost absolute control over the provincial industry…all Quebec maple syrup must pass through the federation, which dictates how much each producer can sell, and penalizes unauthorized production and selling.”

So, not a mafia, but certainly restrictive.

Before his sentencing, this is what St. Pierre said: he’ll continue to ignore those rules. And he’ll keep buying maple syrup from Quebec’s scofflaw producers. “I will never stop. I didn’t steal nothing.”

Étienne St-Pierre was found guilty of fraud and trafficking in 2017 and sentenced to two years less a day to serve in the community, as well as a three-year probation.