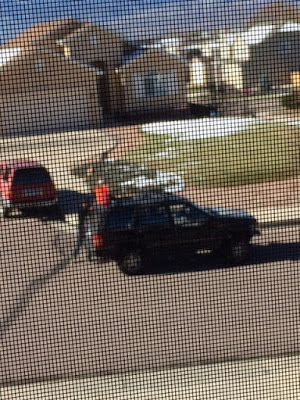 So, here I am writing at my computer on a Friday morning somewhere around 10:45, minding my own business, preparing my next blog article in advance so as to stay ahead of the game. For some reason, I glance out the study window. Across the street, but not parked at the curb, sets a black Jeep Cherokee, pointing in the wrong direction for that side of our cul de sac. The driver is leaning forward in his seat like he's reading the dashboard or looking at something on the floor. He stays in that position for a while, but his head moves occasionally, so I'm pretty sure it isn't a problem where I'll have to out and give him CPR. I go back to writing.

About five minutes later, I glance out the study window again to check on the vehicle. It hasn't moved, but the driver is now standing on the rear bumper. On the roof of his Jeep, he has positioned an orange Home Depot bucket, a reddish one-gallon plastic jug and a length of rubber hose. One end of the hose is in the bucket and the other end disappears over the driver's side of the vehicle. Obviously, the poor guy has run out of gas. 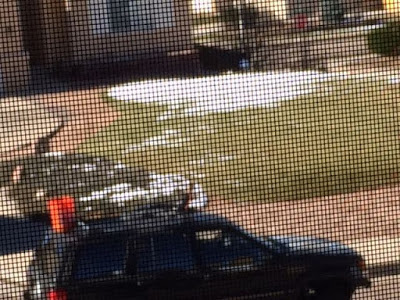 Since my vision has declined to the point where the state no longer allows me to drive at night, I call my wife into the study and ask her if it's anyone we know. She replies in the negative, watches for a few seconds and then goes upstairs and starts taking pictures. Unfortunately, her cell phone camera focuses on the screen mesh in the storm window. She then goes out the back of our house and shoots off a few more from the corner of our garage. I need to get that woman one of them long range lenses.

I pick up the binoculars to see what the guy is doing now. He keeps pulling up on a cloth to cover his lower face. I tell you, something ain't right here. 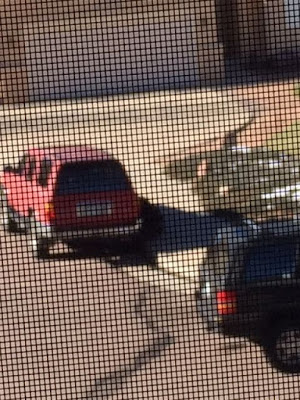 Two neighbor women who frequently walk together for exercise, pass by the guy and barely notice him and his actions.

Well, you can take the cop out of the street, but you can't necessarily take the street out of the cop. I abandon my writing, put on my hat, lace up my tennie-runners and exit the rear of my house to walk around to the street. Wished I'd a had a baseball bat to carry along, but I'd given both bats to my grandsons years ago when they got interested in baseball. Could have taken my 9mm, but I'm not law enforcement anymore. Civilians get in trouble for shooting other people, even shooting criminals if it's a non life threatening situation. This appears to be a misdemeanor, which is a non capital crime. Oh sure, we have the Make-My-Day-Law, but the guy isn't in my house, so no free shots here. I'm better off, at this point, not carrying a firearm. Still, the bat would have been a good idea because the guy is in his twenties, slender, about 5'10" and healthy. Me, I've managed to put more than seven decades behind me, but while my mind still thinks it's got it, my body is not so sure. It's like having the brains of a fighting rooster with the body of a..... Never mind, form your own picture. 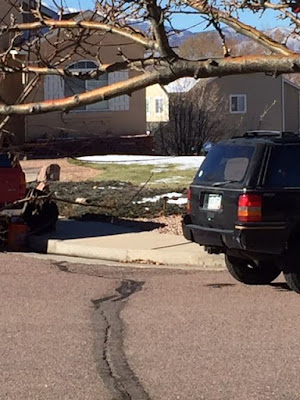 By now, the guy is sitting on the curb beside my neighbor's red Jeep. The guy's head is almost inside the red Jeep's rear wheel well. His head comes out when he hears my approach.

"Does Frede know you're siphoning gas out of his Jeep?"

The guy remains unruffled and calm.

Well, hell, that slowed me down. I expected a shouting confrontation or to have the guy make a dash for freedom. Nothing.

Now he's got me because Fred is a college professor and I've had at least one other weird run-in with some of Fred's strange associates. Something about an early morning encounter a few years ago when a young woman crawled underneath this same red Jeep and staying there while her male companion tried to get her out. And, no, she wasn't a transmission mechanic. People sure are entertaining. 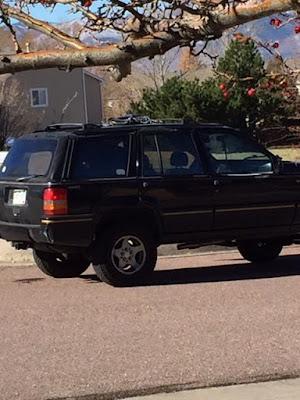 One way to find out what's going on this time. I head up the sidewalk to Fred's house. At this point, the guy immediately jumps up, runs to his car and drives away. Me being armed with only pen and paper, I jot down his license plate number and go ring Fred's doorbell. Fred comes out in his stockinged feet.

The gas thief has punctured the gas refill hose above the fuel tank with a knife, stuck one end of the hose into the line and down into the gas tank. By sucking on the other end of the hose, he got the fuel moving and then stuck that end in the bucket. The gas was still siphoning out of the red Jeep when Fred got down on his hands and knees to look into the wheel well.

Amazingly enough, a uniform cop shows up to take statements and make a report. I transfer the photos my wife took over to the cop's cell phone. Unfortunately, there are no photos of the thief's face, but then he kept the lower half covered anyway. Turns out the license plate comes back to a green Jeep Cherokee, not a black one. Probably a stolen plate.

All this happened in broad daylight in a nice residential area. Pretty bold for a thief.

I tell my wife we may need to start up a mini-neighborhood watch, just for our cul de sac. She agrees, but then she probably wants to be in charge of the photography department.

I also tell my two grandsons that I want my bats back. I'm not going out there un-weaponed again. Hell, I'm over seventy and have more writing to do.

On a side note, the Best American Mystery Stories 2018 put my name in their list of Other Distinguished Mystery Stories of 2017 for "Black Friday" AHMM Nov/Dec 2017. According to John Floyd's record keeping, that's my third time on their list. Now, if I could only edge over into the Top Twenty category.
Posted by R.T. Lawton at 00:01