I've played guitar since the Monkees hit it big, and I read music (a little) and know (a little) theory, but I don't write songs. 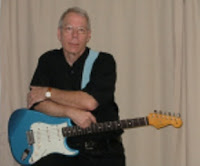 I've been known to commit poetry under extreme circumstances, but songs have more technical demands than I can handle: melody, rhythm, lyrics, harmony, maybe even a bass line...and that's all assuming I can sing, which is still a topic of heated debate.

Strangely enough, several of my stories involve made-up songs. I had to convince people they're real to make the stories work.

In Blood On The Tracks, my first Woody Guthrie novel, we learn that dead singer Jeremy Garth wrote a song to Megan Traine. At the recording session, Meg blew a chord change and her mistake caused lots of bad stuff to happen. Since the session was years ago and Guthrie is only a so-so guitar player (probably a little better than I am), I had two problems. First, how would he figure out that the song was written for Meg? That was easy because I could put a hint into the lyrics. But how could Guthrie surmise that Meg made a mistake years after the fact?

That took some thought. I know just enough about music to recognize typical chord progressions, and I changed one chord so it wouldn't quite fit the rest of the song. It took me about half an hour to create a logical chord sequence for a song no reader will ever hear. Once I had it, I knew how a brilliant musician could make the necessary mistake, too. Several musicians have told me they enjoyed the music background in the book, and nobody has ever had any trouble believing what happened. I still have a general idea what the song sounds like, but don't expect to hear it on my next CD. Don't hold your breath for the CD, either.

Two other stories explore musical plagiarism. "Hot Sugar Blues," which appeared in the MWA anthology Vengeance (and was nominated for an Edgar) tells of a white blues singer who copied a song he heard a black man perform in a southern bar. I had to make it logical that he'd have trouble figuring out the chords until the performer showed him what they were, so I had Deacon Maddix put his guitar into a special tuning.
Keith Richards, Stephen Stills, David Crosby, Joni Mitchell and Richard Thompson all frequently re-tune for different voicings in their songs. Robert Johnson's early blues are hard to figure out, too, partly because he had amazing technique, but also because he played most of them in different tunings so he could use a slide or reach unusual notes. Johnson gave me the idea, and I put Maddix's song into a tuning I've never heard anyone ever use. Maybe someday I'll try playing a song in that tuning to hear if it even works. Maybe I'll do it for that same CD. 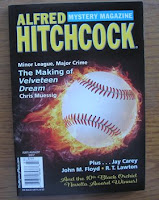 "Look What They've Done To My Song, Ma," in last summer's Alfred Hitchcock Mystery Magazine, casts Woody Guthrie and Megan Train in another musical mystery. A man claimed that a singer worked with him on several songs, but released them without giving him any credit or royalties. Since the singer was known for her lyrics, I could work with words more than music, and had far too much fun creating esoteric rhymes. I even made one song use the rhyme scheme AAAAAAAA, which is harder in English than in the romance languages with an inflected ending. I simply listed the words that rhyme. I'd hate to try to write verses with those words that actually made sense, though. Maybe that's why someone ends up getting killed.

Right now, I'm polishing another story that involves a song. Conan Doyle's Sherlock Holmes classic "The Musgrave Ritual" may have been my unconscious starting point because I was on a panel with Lindsay Faye, who recently published a collection of "new" Holmes stories. The song in my new story seems to be an obscure old ballad, but the characters suspect it's really much newer...and that the message is dangerous. I've written out five verses and even have a general idea of the chords and melody.

Look for it on the second CD I don't plan to produce.

DAMN, I had to go through seven or eight proofs I'm not a robot. ANNOYING.

Do you know the George Jones classic, "If Drinkin' Don't Kill Me (Her Memory Will)" ...

I notice that if you pick out the tune on the piano, you use only the black keys for the first two verses & don't need the white keys at all until halfway through the next part of the song.

Elizabeth, I don't know that song, but what you say suggests to me (with that limited knowledge of theory I mentioned above), that it changes keys after the first two verses.

A lot of the old rockers came up through folk or blues first, and many of those songs used alternate tunings. Stills and Crosby were both folkies before they joined rock bands.

Music has power to soothe the savage breast - and also to drive one crazy. I keep thinking of Noriega, ensconced in the Holy See Embassy, and US soldiers blasting it (and him) with blaring heavy metal rock. (I couldn't help but pity the poor embassy workers...) The playlist is available on YouTube, I understand.