How to Vanish a Car


by Leigh Lundin
Previously, David Edgerley Gates mentioned the Orson Welles Cinema in Cambridge. That brought back memories of the theatre and a sports car. Don’t worry, I can connect the two. I can even tell you how to spirit an automobile out of a closed parking lot.

In the 1970s, I lived in the scenic town of Brockton. For those who might not know Eastern Massachusetts, Brockton’s an industrial site south of Boston, having neither the charm nor historical significance of surrounding settlements. Brockton was named after a British Army officer, Isaac Brock, known for ignoring United States sovereignty, kicking Detroit’s ass in the War of 1812, and never setting foot in the village named after him. Naming the hamlet after one of our nation’s enemies was considered a step up since previously the burg had unimaginatively borrowed the name of a neighboring town.

Once known for shoe production, Brockton’s major output has been Brockton Girls.™ As explained to me, Brockton girls are known for their toughness and making roller derby dames tremble and cry like third graders. Seriously. It should be noted that no wussy member of Daesh/ISIS has ever tangled with a Brockton girl and lived to tell about it.


[Brockton letters of complaint should be addressed to Velma@idontcare.com]

This cultural background should give you an idea why I liked visiting Cambridge, Boston, Plymouth, Buzzard’s Bay or pretty much any place other than Brockton.

After David Edgerley Gates’ article, he and I exchanged notes about the Orson Welles. I asked if he remembered the Exeter Street Theater, my other favorite movie house. David wrote: 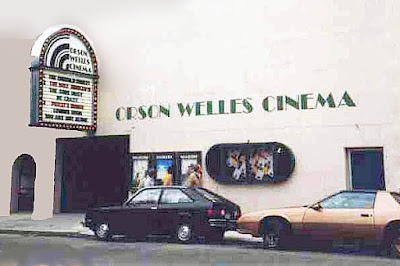 I started writing movie columns for the Cambridge Phoenix in late 1970, which is when the Orson Welles, WBCN, and the Tea Party were just getting legs. Boston Tea Party was one of the two big clubs that headlined live bands, aside from theatrical venues. It was started by a guy named Ray Riepen from Kansas City, who also began ’BCN and the Phoenix. Ray brought in a guy named Harper Barnes from St. Louis as editor of the Phoenix. and it was Harper who hired me. I was at the Welles a lot over the next three years or so, the theater, the restaurant, and the film school– there was some talk about my doing a course (film appreciation, something along those lines) but we never firmed it up.

I remember the Exeter well. My family took me when I was little because it was basically a high-end art house and by myself later. That's where we saw Olivier’s Richard III.

My neighborhood theater was the University in Harvard Square (later renamed the Harvard Sq.), sometimes the Brattle, and very occasionally the Eliot, which was further up Mass. Ave. past Porter Sq. and the Sears, so North Cambridge and off my turf. I took the subway downtown all the time, probably from the time I was 8 or 9, to the theaters on Washington St. A misspent youth.

Meanwhile, back at the ranch…

The Orson Welles, the Exeter, and the Brattle were everything the local Cineplex wasn’t. They offered film festivals and celluloid that had withstood the test of time.

My date loved noir and particularly Bogart. If Bogie hadn’t died when she was about seven, Wendy might have arm-wrestled that bitch Bacall for him.

My car at the time was a Saab Sonett III, which looked like a baby Corvette in peculiar green. It was a cute little car. The sobriquet ‘Sonett’ had nothing to do with music but came from the Swedish phrase “Så nätt!” which translates “So neat!”

Despite the fact its roofline came only to my belt buckle, the car easily accommodated my long legs. It attained much better gas mileage than my Land Cruiser and Saab’s front-wheel-drive made for good road-handing. But…

It had frightfully expensive mufflers that rusted out between car washes. With its little Ford V-4 engine, I could buy off-the-shelf Pinto and Mercury Capri parts, but changing the Nº 1 spark plug meant loosening the damned engine mounts. Worst of all, it was a crash magnet. Bostonians are infamously terrible drivers (think citywide dodge’em bumper cars) and they seemed to target the little machine.

The Sonett Saves the Evening

Near the Orson Welles Cinema was a large walled parking lot next to a dry cleaners where I usually parked. This particular evening, we attended a Warner Bros. film festival of World War II propaganda cartoons, Bugs Bunny takes on Hitler, and the like.

The parking lot looked unusually empty, but I didn’t pay particular attention. We strolled to the theatre, enjoyed the show and left around midnight. When we arrived at the parking lot, we were shocked to find a heavy chain across the entrance.

What the hell? Then we saw it: On the back wall hung a sign that said the lot closed when the cleaners closed. After so many years, it seemed selfish to ban visitors from a public lot after hours, but it was their property and perhaps they’d endured problems we didn’t know about.

Damn. I inspected the chain, secured by sturdy bolts. The threads hadn’t been peened down and simple wrenches could have undone them, but I carried no tools in the car. We were nearly an hour away from my house in Brockton and more than an hour from Wendy’s home in Plymouth– 45 miles. A taxi wasn’t feasible. We weren’t even close to a hotel.

We debated options, none of them good. We might have found a pay phone, but we were desperately short of change. No cell phone of course… early mobile phones were just hitting the market, briefcase-size units affordable only to the wealthy.

A fun evening appeared ruined. Worse, we looked forward to a miserable night if we couldn’t find a motel.

And then an idea struck. The back of the Sonett featured kind of a hatchback with a floor covered by heavy carpet. I pulled out the carpet and the floor mats as Wendy climbed in the driver’s seat.

She let in the clutch as I positioned the carpet and mats over the windshield and roof. I raised the chain… it cleared the hood. Wendy eased the car forward. I hefted the heavy steel segments to bypass the wipers. The car inched ahead until the chain met the floor mats covering the upper windscreen. The links tightened. I forced them up.

The car crept onward. The chain, now taut, remained an inch short of clearing the glass; it had maxed out. Still pulling up on it, I put my body weight on the car, cursing the heavy-duty shocks I’d installed.

But as Wendy edged the Sonett ever forward, the swept-back windshield and my muscling the chain up while forcing the car down brought the steel links up to the roofline.

Carefully, ever carefully, its fiberglass top protected by the carpet, Saab slid under the chain. And then…

The worst had passed. We were on the down slope. Now it was a matter of protecting the paint and rear window as the chain slid away.

Whew! We were ebullient, exuberant, joyful to be on our way, but grateful and well aware of our blessed luck and fortunate outcome.

Even so, we would have loved to be flies on the wall (or pigeons on the pavement) when the mean parking lot owners returned and found the vehicle missing. They must have scratched their heads wondering how we spirited that car out of a walled parking lot.

What magic tricks have caught your fancy?
Posted by Leigh Lundin at 00:00