Kids who grow up and become writers still love dropping hints. They're just more subtle about it. Think about the movie The Sixth Sense. (Spoiler alert: If you haven't seen this movie, dear Lord, stop reading and go watch it right now before returning here. You're welcome.) Haley Joel Osment gave the film's big secret away when he looked right at Bruce Willis and told the audience, "I see dead people." But the film was written so well that the viewer likely (hopefully) didn't get the hint until the big reveal at the end.

As a writer, it can be a lot of fun to drop in hints designed to fly right past the reader, knowing that when the story's secret is revealed at the end, the reader will say, "Ohhh, I should have known," because the clues were all there if only the poor reader had noticed them.

And that's really such an important part of writing mysteries--acting like a good magician, distracting readers from the clues that are right there on the page so the readers can be surprised at the end. 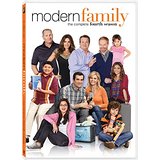 I was reminded of this point last week while watching a rerun of Modern Family. The TV show isn't about crime or mystery, but the writers must read them. In the episode titled "The Alliance" (season eight, episode eight), the story starts with members of the large extended family casually talking about where they all could go on a big family vacation. The vacation discussion is portrayed as background music. Something mentioned and then forgotten as the real meat of the episode begins. But when you get to the end, you realize there's been a long con going on, and the clues were buried right before the viewers eyes in multiple scenes. It was so much fun to realize I'd been tricked. And then the writers took it a step further and showed how they fooled you with each clue. Excellent writing!

Of course there are a lot of good examples of writers who hide clues right before your eyes. If you're a movie fan, you might want to check out Screenrant.com. They have a page where they discuss The Ten Best Movie Clues You Totally Missed.

And, last but not least, are books and stories with well-hidden clues. One story in which I successfully hid the clues (at least I think I did) is called "Ulterior Motives," which came out a few years ago in an anthology named Ride 2. All the stories involved cycling. Mine was the only mystery--and actually the story had two mysteries. The central plot revolved around a teenage girl who volunteers for a political campaign and is threatened. Who's behind the
threats is the main mystery (as well as whether the campaign is successful), and I hid some clues along the way addressing those questions. But there's a second mystery in the tale, one buried so well--again, I hope--that the reader doesn't even realize the mystery is at work until the end. Early in the story it's mentioned that a quirky burglar is at work in town, going into people's homes and taking small items, then leaving them in the homeowners' mailboxes. Who is the burglar, and why does he/she act so oddly? I had fun burying those clues. Although it was a bit disconcerting when I read one review that showed the reviewer hadn't recognized some of the clues, even at the end. I'm not sure if that's good or bad. Can you hide a clue too well? Maybe.

In a more recent story, "The Best-Laid Plans," I drop some details along the way foreshadowing what's to come. The main character, Eloise, writes cozies. Her antagonist, Kim, writes edgier mysteries. The characters' personalities match the mysteries they write. So when Kim insults Eloise publicly just weeks before they are both to appear as honored guests at a mystery convention, it makes sense that Eloise responds with a plan of revenge--a cozy plan. How does it turn out? I don't want to ruin it for you. But bear in mind that the characters' personalities affect their habits and how they deal with stress, so if you read carefully enough, you might be able to see where the story is going. But the ending should still take you by surprise. The story was published in Malice Domestic 11: Murder Most Conventional. You can read it at my website. I'm honored that this story is currently a finalist for the Agatha Award, up against tough competition, including from two of my fellow SleuthSayers, B.K. Stevens and Art Taylor, as well as from writers Gretchen Archer and Edith Maxwell. You can read all the stories online. Head on over to the Malice Domestic website, where the story titles are links either to the stories themselves or a way to buy them.

So, what's your favorite movie, TV show, or book with hidden clues and why? Let's all add to each others' to-be-read/watched list.
Posted by Barb Goffman at 00:00