The explosion outside sent my inside cats scrambling out of the room. I knew what it was because the generator kicked on automatically and the lights flickered back on. Transformer. No damage to my computer. Laptop wasn't plugged in. It was midday and the summer air thick with humidity, clinging to my face as I stepped outside and over to the light pole. 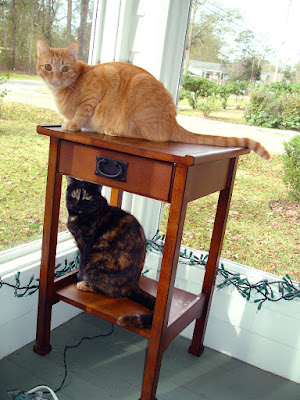 A whiff of white smoke rose from the gray metal transformer atop the pole and I punched 911 into my cell phone, told the emergency dispatcher the transformer may be on fire and gave the intersection of the light pole and the twelve digit number on the pole and waited.

A fire engine crawled up, red lights flashing but no siren and two firefighters in orange uniforms climbed out, shielding their eyes to the sun as they looked up at the transformer. They declared no immediate danger but would stay around until the electric company repair truck showed up. Twelve minutes later a white truck pulled up and a woman in blue work clothes stepped out, greeted me and the firefighters. She looked up at the transformer, nodded and reached into the back of her truck for a long yellow pole. She lengthened the pole, pulling out extensions until the ten-foot pole was long enough to reach the top of the transformer. 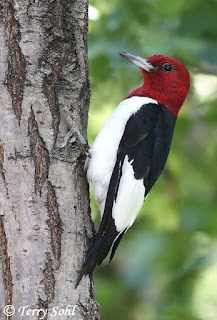 I moved to it, saw the feathers were ruffled, feathers normally neatly alighed as the pretty bird fluttered through my neighborhood. The feathers stuck out like porcupine quills and the bird's skull lay cracked open.

As the electrical worker positioned her truck so she could climb into the bucket of its cherry-picker to rise and replace the conductor, I asked the firefighters if they had a glove and one gave me a rubber surgical glove. I worked the glove onto my left hand and picked up the woodpecker, took it to the side door of my house and laid it on the concrete driveway next to my wife's bright red car. As I walked back to the telephone pole, I spied one of the feral cats we feed to keep the urban rodent population down as it came out from under my raised house to sniff the dead bird. This was a gray cat, one of the big onces. A male. He didn't seem interested in the bird and turned away. A black and white cat, thin, a young female, darted from under the red car, snatched up the dead woodpecker and took it under the house. 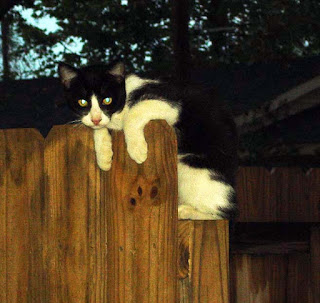 outside cat on fence

Fifty-one minutes after the explosion the electricty was restored to the area, my generator kicking off. The fire engine crept away and I thanked the electric worker who took her truck to the next call. I moved to go back inside and spotted the black and white cat just under the house, her yellow eyes watching me as she gnawed the woodpecker's breast.

I looked up, shielding my eyes from the sun and thought - if one death was due today, I was glad it was the woodpecker, although it was a lovely bird. Somewhere in that sky my wife was in a silver jet, flying to visit her mother. If God, or the devil, or fate or whoever was due a death, let it be the woodpecker because everything dies. I thought of the heart surgery I survived a few years ago as I stepped back into my house and wondered if something else died the day the doctors saved me. Most likely.

Back at my computer, I picked up where I left off in the novel I was writing before the woodpecker interrupted me. Only I could not envision the characters or the scene. I saw the red-headed woodpecker fluttering low to the ground, passing from one tree to another and felt sad. Damn transformer. Damn humans with our endless contraptions.

But the sadness was short lived because I remembered the hungry yellow eyes of the cat as she had her lunch. 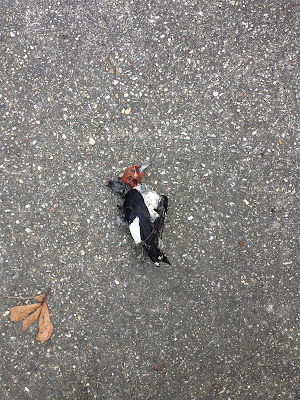 This was a true story