All about me me me, not really

"A writer who claims to have a small ego is either not telling the truth, or lying." — William DeAndrea

In December John Floyd wrote a piece here about twenty years of Best American Mystery Stories and I was honored to get a mention.  But there was something in the comments that surprised me: several writers said they had not known they had been mentioned in the Distinguished Lists at the end of the book until John told them.

Not the case for me.  I doubt there has been a best-of-the-year mystery collection published in the last three decades that I haven't scoured for my name. This may be in part because my third published story, the first in Alfred Hitchcock's Mystery Magazine, found its way into the Honor Roll at the back of one of Edward D. Hoch's best-of-the-year collection, back in the days of hoop skirts and buggy whips.  James L. Swain, in one of his excellent mystery novels about a gambling consultant, says that the worst thing that can happen to a person in a casino is to win the first time they play, because it gets you hooked. So I am an innocent victim.

But I have not seen my name in such a book again until BAMS 2015 when I made the distinguished list, and then hit the big time in 2016.  It may be another few decades for anything like that happens again.

Of course, there are other ways to feed the  habit.  How often do you vanity-Google yourself?  Most writers I know do it, but they tend to feel guilty about it.  Nice to see if anyone is talking about you.  (Or not nice, depending on what they say.)

Sometimes I type in my name and the title of one of my books or stories to see if someone has said anything about them. Occasionally I have found that someone put up a copy of one of my stories on the web illegally.  That's always fun.

But what I am interested in today is people who show up who aren't me.  I'm not talking about identity fraud, but other people with my name.

For instance, there is a psychologist in my home state of New Jersey who probably wishes I had a different name or hadn't gone into writing, since our identities get tangled on the web.  He spells LoPresti with a capital P but Google doesn't recognize that as a difference.

And Google can also show you a striking mug shot of a guy with my name in Florida.  I'm not going to put it here though.

Oddly enough I have been Tuckerized occasionally, although I assume it was an accident.  "Tuckerizing" is when you put a person's name in your book, usually because they bought the rights with a donation to charity.

For example, my name appears in Robert B. Parker's Killing the Blues, a novel by Michael Brandman about Parker's character Jesse Stone.  I don't know Mr. Brandman and assume he picked my name at random, but it's freaky to read about myself being, for example, handcuffed and unconscious.  (That hasn't happened in years.)

And in Bye the Book, a medical thriller by Frank Caceres, I show up behind bars as a murder suspect. Again, I don't know the author.

Someday I will have to read these books and find out what happens to me.  I hope I'm okay.

When I first moved to this part of the world people would ask me if I was related to the local sports writer Mike Lopresti.  I explained that I wasn't related and that he wasn't local; hje just worked for the chain that owned our local newspaper. 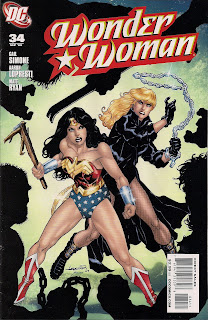 And then there is Phil LoPresti who started the LoPresti Aviation Company.  A lot of people have nice things to say about his airplanes.

But the reason I am dragging this out is to tell you this.  I have a nonfiction book coming out later this year entitled When Women Didn't Count (more about that closer to publication date).  I needed to send someone a link to the publisher's pre-pub page so I went to Google and typed in: Lopresti Women.  And what popped up first were a lot of pages like the one on the right. Aaron Lopresti, comic book artist, may be the most famous of my namesakes.  And no, we aren't related either.