Why Book Tours are Expensive (More Comedy on the Road)

I’ve recently been on a book tour for my latest crime comedy, The Goddaughter’s Revenge (winner of the 2014 Derringer and Arthur Ellis Awards for Best Novella. There. I got it in.  My publisher can relax now.)

Book tours are expensive.  You travel around to independent book stores and you sell some books and sign them.

It’s fun.  You meet a lot of great people.  But it’s expensive.  And I’m not talking about the hotel bill and the bar tab.

I should have just stayed in the bar.  It was leaving the bar that become expensive.

Nice night.  We decided to go for a walk.  It was dark, but I had on my brand new expensive progressive eye-glasses, so not a problem, right?

One second I was walking and talking.  The next, I was flying through the air.

“OHMYGOD! Are you okay?”  said my colleague.

I was clearly not okay.  In fact, I was splat on the sidewalk and could not move.

I tried to lift my head.  Ouch.

“That must have hurt,” said someone helpfully.

I write about a mob Goddaughter. So I know a bit about mob take-outs.  It may come in handy.

“Couldn’t figure out why you were running ahead of us.” My colleague shook his head.

I wasn’t running.  I was tripping and falling.

“That sidewalk is uneven.  Your foot must have caught on it.”

But here’s the thing.  I hit in this order: knees, tummy, boobs, palms.  My tummy and boobs cushioned the fall and saved my face.

Yes, this was going through my mind as I pushed back with my tender palms to balance on my bloody knees.

I stood up.  Surveyed the damage.  My knees were a bloody mess, but the dress survived without a scratch.  It was made in China, of course.  Of plastic.

The crowd was dispersing.  But the pain wasn’t over.

Next day, I hobbled to the clinic.  The doctor, who probably isn’t old enough to drive a car, shook his head.

“Progressive glasses are the number one reason seniors fall.  They are looking through the reading part of their glasses when they walk, and can’t see the ground properly.”

“Get some distance-only glasses,” he advised.

So I did.  Another 350 bucks later, I have a third pair of glasses to carry around in my purse.
Which means my purse isn’t big enough.

So I need to buy a new purse.

And that’s why book tours are so expensive.

Melodie Campbell is an infant Sleuthsayer, and this is her third column.  She writes comedies (No shit, Sherlock.)  You can find them at www.melodiecampbell.com and all the usual book places. 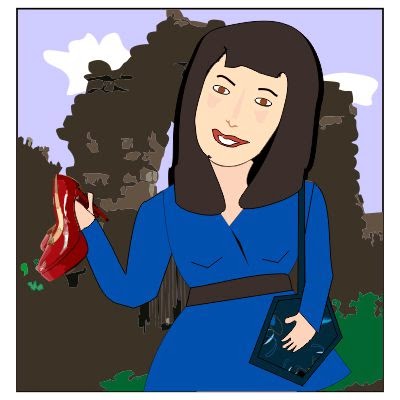