This has been an awful week for me personally. After hearing about the death of always creative and funny icon Robin Williams and all that sadness entailed, we hear about the death of the beautiful Lauren Bacall. Of course, there was a big difference.  Age for one thing, Betty Bacall was eighty-nine years old and had lived a full and I imagine a reasonably happy life. Her great love was Humphrey Bogart and by all accounts their marriage was happy and fulfilling. Although it was cut short by his early death.

Robin Williams was only sixty-six, and I say only because I have long since past my sixties and that seems reason enough to say "only." But we discover that he was a man who has fought depression for a number of years. But he had given up his addictive drugs and seemed to be on a fairly good path. Problem is, we just never know. Little things can send a troubled mind off into the abyss and into that awful land of suicide. His television show had been cancelled and he recently had been diagnosed with Parkinson's Disease according to his wife. Those two things are enough to slam even the hardiest of us right into the gut, but to someone who deals with clinical depression and someone who perhaps is bi-polar it can be devastating. No one except a person who has dealt with such depression can begin to understand.

On Friday, I learned along with many others in the writing game, Jeremiah Francis Healy the lll had also died.  He had completed suicide on Thursday evening. Jerry Healy aka Terry Devane was only sixty-eight years old. This was the hardest blow for me to take as I've known Jerry for years and years and been around him, bar-hopping, playing poker, eating meals, laughing and talking about writing for hour upon hour. There was a time when I went to at least two mystery conferences a year, the main one being Bouchercon. And it was at these fan and writer outings that I spent time with Jerry, along with a cadre of mystery writers. Jerry was a graduate of Rutgers College and Harvard Law School and was a Professor at the New England School of Law for eighteen years. We always teased him about his preppy look. But he could carry it off if anyone could. Probably that big smile of his made us forgive him.

He was a member of Private Eye Writers, a Shamus Award winner and nominee and was the President of PWA. For several years I was the editor of their newsletter, Reflections in a Private Eye and because of that Jerry and I spoke on the phone occasionally but, more often we e-mailed back and forth. Jerry wrote over thirteen novels featuring John Francis Cuddy, Private Eye Series and two short story collections with Cuddy. Fifteen have been either nominated or won the Shamus award given by the Private Eye Writers of America. In 2001, began the legal thrillers featuring Mariead O'Clare, written under the name of Terry Devane. The third, A Stain Upon The Rose was optioned for a feature film. He was also a President of the International Association of Crime Writers and traveled extensively in Europe.

I personally never would have guessed that Jerry suffered chronic depression, however, I do know that it seems to be a regular visitor to creative people. I imagine all the times I was around Jerry, he was in his element, being with fans and writers and discussing writing projects and the writing biz. At those times the depression was at bay.

Since Friday, I have learned one thing that I did already know but learned much more about, was how many upcoming writers that Jerry helped. He shared stories and ideas and encouraged them especially new writers coming up. He helped me quite a lot and blurbed my first book. And I do have a bit of insight into why Jerry was always helping.

One early morning after an all night poker game at Bob Randisi's headquarters (our usual game room) Jerry insisted in walking me back to my hotel room. It was only across the street as I recall but being the gentleman he was, he didn't want me out on the street alone at four in the morning. We were strolling along, in no particular hurry, talking about receiving help from other more advanced writers. I remember saying something like, I can never repay the writers who have helped me along the way. Jerry said, something like, you can't even begin to repay them.  But let me tell you what Mary Higgins Clark told me.

Right after Jerry's first book was published, he attended the Edgars meeting in NYC. Since he lived in Boston, this was not a big deal for him. However, a few people knew he had recently published his first book. Somehow, Ms Clark found him and invited him to a party at her apartment.  Seems everyone who was everyone was going. Jerry went still not knowing how Mary Higgins Clark knew who he was and during the evening he found himself talking to Ms Clark and two or three others and he said to her. I've been lucky in that I've had so many other mystery writers who have helped and encouraged me along the way. I'll never be able to pay them back for all they've done. Without missing a beat, Mary said, "Don't even try it. You'll never be able to make up. But what you can do is pay it forward. You can help others who are coming along and in that way you are giving back to all the ones who helped you."

Jerry took that to heart and I read over and over from a large number of FB people how Jerry had helped and encouraged them in their writing. He also helped when he learned they might be having a personal crises. Jerry would pull them aside and give them encouragement. And each person said what a genuine, warm and kind person he was.

If I thought for a while I could come up with story after story of Jerry and some of the funny things he did. Or the gentlemanly things he did. But thinking too hard about those stories are a bit to difficult to think of right now. My heart is too full of our loss. But two stories did come to mind.

Once a group of us had a joint signing at a mystery bookstore, maybe in Bethesda. After the signing, everyone was trying to get a taxi to go back to the hotel. I got back with a group of writers and I saw three or four older ladies getting out of a taxi with Jerry Healy. The ladies had huge smiles on their faces and I thought to myself, Jerry just made the day for those fans. They will never forget his taking the time to visit with them and what a gentleman he was.

The other story is one that I hope will give you a smile.  A number of private eye writers play poker in Randisi's room. The game is by invitation only and I had the honor of being the first female who was asked to play. For several times, I was on the "B" team, meaning I could only play after one of the "A" gave up or was wiped out for the evening. One Saturday night at Bouchercon, after the banquet a group of us met up in the hotel lobby to head for the poker game. There were four or five of us and we walk in the hotel room to find Jeremiah Healy, all alone in the room, sitting alone at one of the tables reading a book. We were taken aback. What in the world was he reading? How To Win At Poker. Needlessly to say, we all fell out laughing.

Goodbye, my friend, I love you and miss you. Much love to Sandy. the family and all the many, many friends who also loved and will miss Jeremiah Healy III. RIP 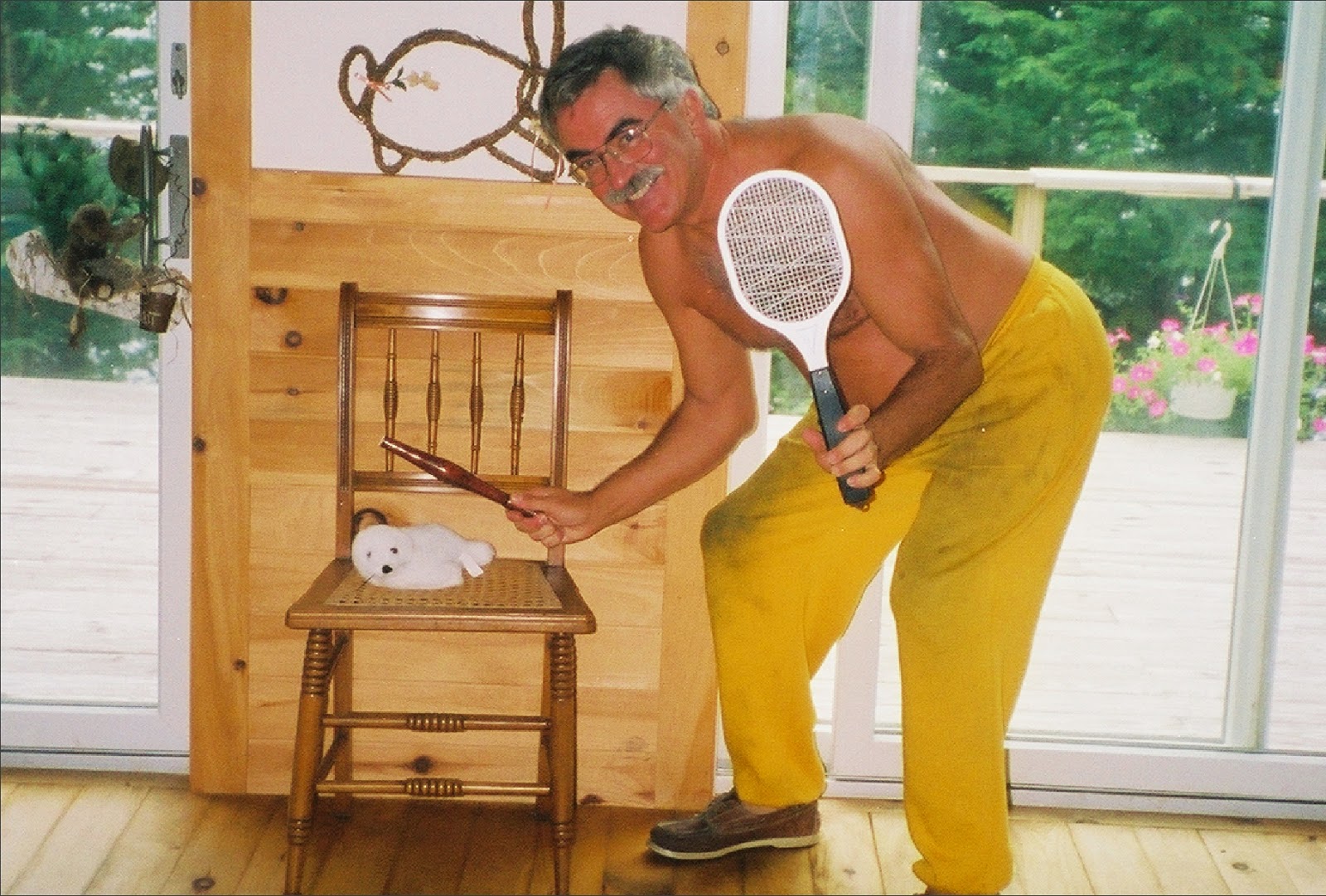 At the Healy's cabin in Maine in 2003. I stayed there while attending an author day event at Five Star Publishing. Jerry demonstrating an electric bug zapper which looks like a tennis racket, the stuffed animal is the victim. Note the evil grin on Healy's face.
Posted by Jan Grape at 00:01