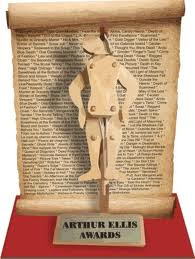 I am writing this a few days after the Arthur Ellis Awards were announced by the Crime Writers of Canada.  Of course,  I am delighted that our latest blogger, Melodie Campbell,  won the award for best novella for "The Goddaughter's Revenge."  Such is the incredible power of the SleuthSayers brand that she started winning awards even before it was announced that she had signed up!

(By the way the award is named after Arthur Ellis, which was the nom de corde of several of Canada's official hangmen.  Fun fact!)

But  the truth is that today's piece was inspired by another of this year's winners: Twist Phelan's "Footprints in water," the champ in the short story category.  I wrote about it last year and it found a place on my best-of list as well.  It tells the tale of an African-born police detective in New York City who is called to a case involving a Congolese family.  But he is there as a translator, while the detective in charge of the case is newly-promoted, a person he has supervised in the past.

And here is my point: the cliche - and you've read it a dozen times, and probably seen it a hundred because TV loves cliches - would be for the two cops to butt heads, fighting for control of the case.  Instead Phelan turns it around: the new cop wants the senior detective's help and he politely but firmly insists that she run the show instead.  That unexpected source of conflict is one of the things that makes the story work so well and, naturally, it made me think of improv comedy.

Perhaps you don't spot the connection.  Let me explain.

My little city has been a hotbed for improv since the great comic Ryan Stiles moved here in 2004.  To indulge his passion he created the Upfront Theatre where improv is taught and performed.  And one of the games they play there is called "New Choice."  It starts with--  Wait.  Why should I try to explain it when you can see a demonstration by Ryan Stiles and Colin Mochry.  If it isn't working directly below you can find it http://tinyurl.com/oty5qsp


The point is, when I am writing (or more likely, rewriting) and I find myself face-to-screen with a cliche, I yell (internally, usually) "New choice!" and try to find a different way around the plot point.  Often, it is an improvement.

Another favorite example is from the movie Alien Nation, which takes place a few years after a huge saucer full of aliens ("the Newcomers") has landed, and they are trying to find a place in society.  Unfortunately some find their way into a life of crime and as the movie opens some of them kill a cop.

New choice!  The cliche would be our hero being forced to partner with the new guy (and in fact, that is exactly how they did it in the generally-better-than-that TV series), but in the movie our hero  astonishes and infuriates his peers by volunteering to work with the Newcomer.  Why?  Because he figures it improves his chances of catching the killers.  Logical, right? 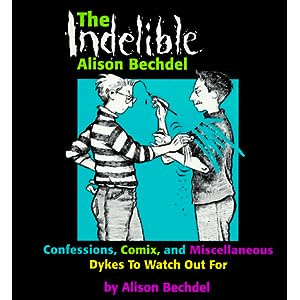 A related thought:  Have you ever head of the Bechdel Test?   Alison Bechdel is a very talented cartoonist.  One of her characters once explained that she will only watch a movie if 1) there are at least two women it, and 2) there is at least one scene in which they talk together 3) about something other than a  man.

Doesn't sound like a  very high standard, but  there are tons of movies that don't reach it.  There is a website that rates more than 5000 movies as to whether they pass the Test.

And before we get distracted let me say I don't think anyone should be forced to put gratuitous women into a movie, a book, or for that matter, a comic strip. (I don't think Bechdel means that either.)  But the Test does give you a chance to look for stereotypes, which are just another kind of cliche, after all.

When I was editing my new novel I realized it didn't pass the Bechdel Test.  After a little thought I changed the sound technician in one scene from Stu to Serona.  Didn't hurt a bit (well, didn't hurt me.  I don't know how Stu/Serona felt about the operation.)

And you know what?  It improved the scene.

Which is the point of it, after all.
Posted by Robert Lopresti at 00:00