by Fran Rizer
Thanks to Janice Law and Leigh Lundin, I spent Friday suffering from self-induced sleep deprivation. When Leigh asked if anyone would like to review Janice Law’s newest novel, I volunteered. It arrived Thursday afternoon, and I didn’t stop reading until I completed it Friday morning. The official release date is the end of August, but I can’t wait to tell you about it. Here’s my review:


Author Janice Law opens Moon Over Tangier with protagonist/narrator Francis Bacon bruised, bleeding, and wearing little more than fishnet stockings in the muddy Berkshire countryside. David, his partner, has once again erupted into a rage that the artist escaped only by running outside after a well-placed kick forced David to release the knife he held at Bacon’s throat.

Third in the Francis Bacon trilogy following The Fires of London, a finalist in the 2012 Lambda Award for Gay Mysteries; and The Prisoner of the Riviera, winner of the 2013 Lambda Award Best Gay Mystery, Moon Over Tangier will impress many readers as even better than the first two.

Eager to escape his situation and obsessed with David, Bacon follows him to Tangier. David—charming when he’s relaxed and mellowed with a happy level of alcohol intake—invites Bacon to a party where he introduces Bacon to his friend Richard who shows them a Picasso he has purchased. Unfortunately, Bacon realizes the painting is a copy, possibly an outright forgery. His telling Richard this leads to Bacon becoming an unwilling undercover agent for the police and barely escaping with his life after being locked in a closet while another man is killed.

Caught up in murders, art forgery, and espionage, Bacon is captured and tortured physically by foreign agents and mentally by his love for David and David’s treatment of him, which he sums up in the words, “David liked me, but he didn’t love me.” 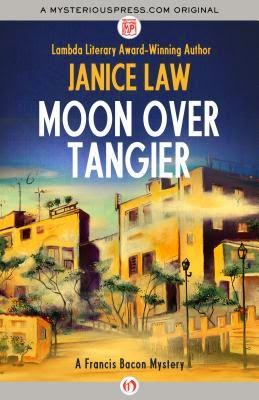 This reader especially liked Francis Bacon’s witty narrator’s voice and appreciated Law’s treatment of David, “a brave, twisted man, half-ruined by the war and busy completing the destruction.” Law’s word choices are consistent with the post-war forties, and at no place do we see the term PTSD, but David is clearly a victim of that condition. In keeping with the time of the setting, Bacon and David do not flaunt their homosexuality, but they do “cavort,” the narrator’s term for their attraction to handsome beach boys and casual sexual encounters, which are not described in detail.

Janice Law's Francis Bacon, the main character, is based on the real Francis Bacon, an Irish-born British bon vivant known for raw emotional imagery in his paintings. Throughout Moon Over Tangier the fictional character's references to his art are consistent with the real Bacon's isolated male heads of the 1940s and screaming popes of the 1950s. In previous Francis Bacon mysteries, his earlier life and close relationship with his nanny are historically accurate as are the descriptions of locations during the designated time periods in all three books.

It is not, however, necessary to know anything about the real Francis Bacon to appreciate reading about Law's fictional version, nor is it necessary to read the first two novels before Moon Over Tangier. This book works just as well as a stand-alone, though anyone who reads this third in the trilogy first will probably then read The Fires of London and The Prisoner of the Riviera.

Historical fiction has not been my favorite genre, but in Moon Over Tangier, Janice Law weaves in the historical facts so skillfully that I am not distracted from the adventure and mystery of the story. With the talent and expertise that Law has displayed in previous works, her writing captures me and takes me into a less than familiar world where the setting and characters become real and exciting. I read Moon Over Tangier for entertainment, and Janice Law's Francis Bacon entertains me five stars.