I’m not the kind of novelist who could write a book about how to write a novel. Maybe that’s because my method doesn’t bear too much analysis. In the division between outliners and into-the-mist writers (or pantsers, as some call them, ie those who write by the seat of the pants), I fall definitely—or mistily—into the category of those who don’t or can’t outline. Picking my way through a mist, with light shining only a little way ahead and no idea what lies beyond that bit of illumination, is an excellent description of how I write long. As I’ve said before, writing short—a poem, a story, a song, a blog post, or a letter to an online therapy client—is a whole lot easier than writing in the mist. 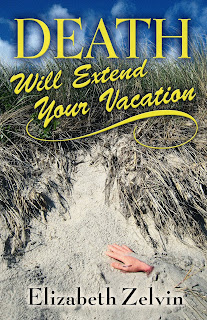 Only by talking with a lot of writers did I realize that for some, outlining means not a sheaf of pages that look like a Power Point presentation, but a collection of little notes. Using index cards or Post-its, they write signposts along the path of the story. For example: “The power fails, lights go out, covering up second murder.” “Journalist wrote a story about the developers.” “Protag and friends search boyfriend’s room for victim’s notebook.” “Roommate is bulimic, hears murderer while in bathroom throwing up.” 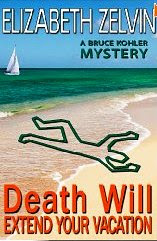 “Ohhh,” I said. “Is that outlining? I do that—or something very like it.” My examples are all notes I scribbled during the writing of the first draft of Death Will Extend Your Vacation—not before, but during the process, as they occurred to me. Some of the events mentioned made it into the draft, others did not. The story took itself in different directions. But that’s exactly what these little-note outliners say happens to their stories. The outline is not inflexible, and it can’t be allowed to trammel the creative process. On the other hand, it is much harder to write not knowing what’s going to happen next, no less in the end, from moment to moment the whole length of 250 pages. 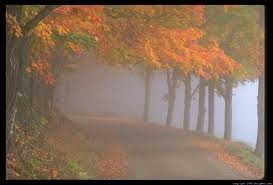 So what’s the difference between outlining and what I do? Is there a difference? For one thing, these notes by no means tell the story. They cover only those flashes in the mist that happen to catch my inner eye. When I think of a mist with headlights trying to break through and mysterious happenings hidden behind its veil, I think of a drive my husband and I once took along the Blue Ridge Parkway on a day so foggy that the Blue Ridge was invisible. It was very quiet, the damp air a heavy blanket muffling sound and movement. Once or twice we spotted a deer cropping grass by the roadside, undisturbed by the beam of our headlights glancing off it. 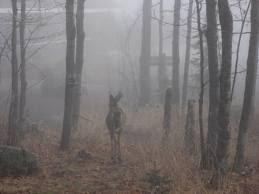 The note taking is like that. If the headlights fall to the left, I see a deer—make a note. There may be a bear to the right that I never see. Sometimes the note-thoughts come to me as I write, sometimes as I lie in bed thinking of yesterday’s writing and of today’s to come. Sometimes not just plot ideas but lines of dialogue and even occasional descriptive passages bubble up while I’m out running. That’s one reason I always carry my cell phone with its digital voice recorder: get it down before I can forget it, so I can make the note when I get back to my pen and my Post-its.

But here’s the biggest difference. To me, “outline” means “commitment.” If I say I’m an outliner, I must have sticky notes, and each note must represent a bit of the story that I am committed to tell, even if the rule is that it’s okay to change my mind later. Every single one of my notes (including the true versions of the examples above) start with “Maybe.” “Maybe the power fails…” “Maybe the journalist wrote a story…” “Maybe the roommate is bulimic…” I’m not committed. But I don’t want to throw away what may turn out to be perfectly good plot points, certainly not just because of my lousy aging memory. Writing it down is like taking a quick photo of that deer at the edge of the mist. I’ve got it, and if I want to, I’ll use it later—maybe.
Posted by Elizabeth Zelvin at 00:01