How to Lose a Reader

Reading for pure pleasure seems to have slipped by the wayside in recent years, but a common cold– natures' way of telling me to slow the hell down– waylaid me. I relaxed with a friend. It's good when another's bookshelf looks at least as interesting as my own, so there I am facing Jeffrey Deaver, James North Patterson, and a host of others. Literary historicals like The Name of the Rose and The Rule of Four intrigue me, so I pluck up a book that compares itself to these along with Possession and A Case of Curiosities.

Sixty-some pages later, I toss the book aside. It isn't a bad book and if I find myself cast away on a desert island with it versus a trunkful of National Enquirers, I'll certainly read it.

The problem is nothing happens. It's like Waiting for Godot set in New York and London. To illustrate chapter-by-chapter,

Sure, the writing is clever. I can see what looks like setups for future plot points. But worse than the lack of forward motion, I feel no bond with the main character. Burdened with a Kerouac-like lack of direction, the guy's not particularly likable. I'm well aware the book could suddenly take off but reading time is precious. Instead of plucking another book off the shelf, I seek a recommendation.

My hostess hands me two books, non-fiction. She tells me there's an unlikely link between them. 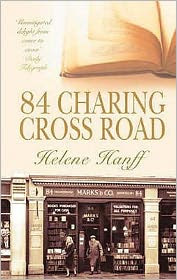 The first is 84 Charing Cross Road by Helene Hanff. It's a series of actual letters between the author and a London bookshop between 1949 and 1969.

Wait, stay with me here. Within a handful of pages, this little book does what the novel above failed to do– it captures the intellect and the emotions.

The book isn't about the war, but it quickly capsulizes post-war America and Britain. Rationing in the US ended in 1946, but while North America poured millions into rebuilding Germany and Japan, British citizens were starving, subsisting on two ounces of meat a week and one egg a month. Stiff upper lip, they soldiered on with the importance of maintaining an ordinary life. That's only background… the real story is yet to come.

How does this relate to crime writing? In the early 1950s, Helene Hanff wrote for Ellery Queen. I don't mean the magazine, I mean E-l-l-e-r-y Q-u-e-e-n. More than once I thought of Dale Andrews. While he'll appreciate that special history, anyone can admire this fast read.

The other book is Between Silk and Cyanide by Leo Marks. I don't like war novels; I don't like them at all. Lose a friend or two and war doesn't seem entertaining. But I appreciate tales of espionage from Erskine Childers' classic The Riddle of the Sands to Alistair MacLean's brilliant novels.

Between Silk and Cyanide is fact, not fiction, told wryly with a self-deprecating charisma. It's about code-breaking and as those with deep computer backgrounds know, the British led when it came to codes and cracking them.

Franklin Roosevelt recognized the need for intelligence and worked with former classmate William 'Wild Bill' Donovan and famed Canadian spymaster William 'Little Bill' Stephenson, a man considered the inspiration for fictional spies such as James Bond. However, the OSS found itself lagging far behind its allies.

I Spy with my Little Eye 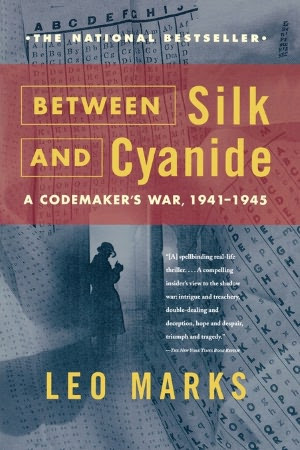 In the 1970s, whenever a television series ran thin on plots, the writers suddenly revealed their hero(ine) secretly worked for the CIA. Thus we found the likes of Jessica Fletcher conspiring with British Intelligence against the KGB, a ghastly plot device that burdens lackluster television today.

I promised to connect 84 Charing Cross Road with a book about spies. The London address happened to be that of Helene Hanff's bookshop, Marks & Co, and their son, 22-year-old Leo Marks, turned out to have a gift with cryptography and wrote the book Between Silk and Cyanide.

For young Marks' initial interview, his superiors devised a sort of test. They handed him a coded message and a key and left him to his devices. An hour later, they looked in on him and again an hour after that. With dismay, they said, "Our code girls decrypt these in twenty minutes."

Marks persisted and just before closing handed them the decoded message. His superiors sighed, obviously disappointed. As Marks turned to leave, they asked him to return the key.

"The cypher key. Surely we gave you the key for it?" they said.

Er, no, they hadn't. Marks hadn't decoded the message given the key, he'd actually cracked the code as if he'd been a foreign spy.

Marks asked, "You don't actually use this code, do you?"

And thus Marks went on to rattle SOE, the Special Operations Executive, and battle its entrenched 'good enough for us' director who detested innovation, even when lives were lost.

Since Marks wasn't permitted to tell anyone where he worked, speculation spread among neighbors he was avoiding military service. His family endured white feathers in their mailbox– the insidious shaming device the British used to call others cowards.

I haven't reached the halfway point, but my hostess gave it the greatest compliment when she said she hadn't wanted it to end.

So, when nothing on the bestseller list appeals to you, consider a pair of books, Helene Hanff's 84 Charing Cross Road and Leo Marks' Between Silk and Cyanide.

They may be non-fiction, but they're damn fine storytelling.
Posted by Leigh Lundin at 00:01