by Eve Fisher
Here's another story from the old days when I was a circuit administrator:

I was driving home from work, from the courthouse, going down Main Street, and I saw an old battered car sitting in a church’s parking lot to the right of me.  It was angled funny, and as I got nearer, it started to move.  My sixth sense clicked in, and somehow I knew he wasn’t going to stop coming out, even though I had the right of way, being on the main drag.  So I stopped just before the corner of this parking lot, and he came out, gunning the engine, burning rubber:  and coming right AT me.  Head on, without stopping, a fixed look on his face.  And there I was stuck, while this maniac played chicken with me with no place for me to even get out of his way.  At the very last minute he swerved, missing me and my front bumper by about an inch, and got on his side of the road.  But he was still so close he drove over the base of the lamppost in the center of the street, and nicked another one, and I watched his hub cap or wheel rim fly off. 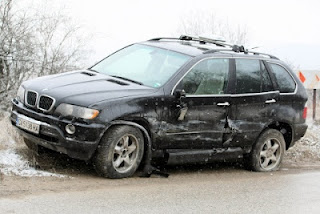 And then he was gone.  Now I'd memorized his license plate - I had nothing else to do and nowhere to go while he was gunning his car at me, other than try to keep breathing and not pee my pants - so I went straight home and called the police.  I knew every cop in town - and in about 14 counties at the time - so it didn't take long for one to come by.  I told him what had happened, gave him the license plate number, and they found him in about fifteen minutes. There are perks to being a circuit administrator in a small town in a rural state...   :)
When they found him, he admitted the whole thing.  He’d just had a huge fight with his wife and before he left home he’d busted out all the windows in his house and maybe some other stuff.  Then he was still so angry he decided to use his car as a weapon against the first woman he saw:  me.   His license was revoked, so he wasn't even supposed to be driving in the first place, but that was irrelevant to his thinking. 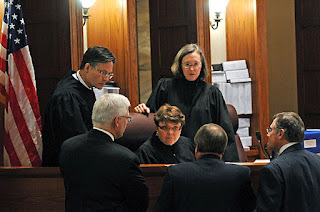 As you can imagine, it felt good to have the judge stand up for me and protect me and all that.  Until I found out from the sheriff's department that the guy had been driving them nuts for a while. They knew he was dealing drugs, but they couldn't ever quite catch him.  Having him leave town was just as good as having him arrested.  And he'd never dare come back, because that charge would be waiting for him for - well, for a meth guy, which he was, basically forever.
So, was the judge standing up for me, or being diabolically clever on getting rid of a standing nuisance?  Or both?  Another day in the life...