For nine years, I rode with the Custer Trail Riders along portions of the route Colonel Custer took on his 1874 mapping expedition through the Black Hills of South Dakota, roughly two years before he rode into history at the Greasy Grass over in Montana. Some historians say he rode for glory, others contend his big ego had him in a state of denial. Either way, the boy appeared to have trouble doing his estimations when it came to math.

Each of our rides brought along a local historian to talk about points of interest, such as the wagon wheel ruts still visible in some spots, or the large stones used by the cooks to bake bread, or the exact places the expedition photographer placed his old tripod to take photos of the landscape and expedition members. Ours was a four day camp with about 150 horses and riders, plus for authenticity, a few members brought along some mules, which usually brayed all night, and if you rode up too close behind them, they would quickly send some rear hooves in your horse's direction. That made for a few impromptu rodeos, which could be amusing as long as it wasn't you sitting on that particular horse.

In Custer's time, there were three types of mules. Some were for riding, some for pack animals and some for pulling wagons. When the muleskinners got up about three in the morning to start sorting out the mules, they had to be able to distinguish in the dark which mule went where. Thus a system had been developed in which each mule's tail was cut in wedges of one, two or three cuts to tell the muleskinner which was a riding mule, etc. The skinner would run his hand down a mule's tail, count the wedges and know whether to saddle him, hitch him to a wagon, or slap a pack on his back. Them boys obviously had more guts and sense of adventure than I do, cuz there's no way I'm running my hand down a mule's rear end in the dead of night. That type of action could definitely lead to a short career with livestock. 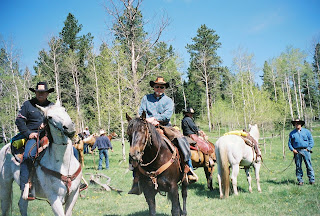 Since Custer allegedly didn't have any women along in the expedition (actually, history says there was one black female cook), the organization is restricted to members of the male sex. (That's me on the light grey, Danny in the middle and Eddie standing far right.)

Naturally, being all male means there is a certain amount of horse play (pun intended), rough housing, card playing and liquid libation in camp. Like the time a bunch of us were sitting around a table playing poker and waiting for the cook to ring the triangle for supper, when here comes Danny. He's returning from watering his mare down at the creek. With just a lead rope for reins, he's riding bareback and has a tumbler of Crown Royal in his other hand. Seeing that friend Eddie sitting at the table has his back turned, Danny rides his mare up close so that the mare's wet nose is slobbering all over the back of Eddie's neck. Without turning around, Eddie calmly takes off his cowboy hat with one hand, throws a two dollar bet into the pot with his other, and then quickly slaps the mare across its nose with his cowboy hat. Startled, the mare commences to crow hop. Not wanting to spill his Crown Royal, Danny rides it out one-handed until the mare catches him short with a sudden spin. Danny ends up flat on his back in the tall grass, staring at blue sky. The lead rope is still clutched in one hand and he appears not to have spilled much of his Crown Royal in the other. In recognition of his expert abilities, our poker table crowd gives him a standing ovation. At evening campfires, these were the type of tales that got related in the years to come. To commemorate some of these events, I started writing cowboy poems about particular incidents. Here's one that got published.

For the Rypkema Ranch ride, Dub Vannerman borrowed a horse from Ray Fuss. Ray claimed that his wife rode this horse often and it was quite gentle, but when Dub went to mount, his right boot caught on his slicker tied behing the saddle, at which point he quickly had a rodeo on his hands. This one's for Dub.

I took that old red roan
and snubbed him to a post,
cuz it was getting kinda hard
to tell who hated who the most.

I blinded up his eyes
with a kerchief from my neck
and cursed myself for paying cash,
shoulda bought him with a check.

I threw the saddle on
and the jughead bit me from behind.
Just tightening up the cinch
took all the strength that I could find.

I stuck my boot into the stirrup
and swung high upon his back,
while he bunched up all his muscles
with all the power he could pack.

I rubbed my glove with rosin,
gripped the saddle with my thighs,
reached down beside his head
and ripped the blindfold off his eyes.

He kicked and bucked and hollered.
I screamed and prayed and cussed.
And when we both were done,
he throwed me in the dust.

Lyin' there spread-eagle,
agreein' man's not meant to fly,
I saw that roan go rearing up
with the devil in his eye.

That's when I lit out a runnin'
and things got really tense,
cuz I was just one step ahead
when I ran right through the fence.

Yessir, that horse was crazy,
tryin' to stomp me into goo,
but when I made it to the house
I knew just what I had to do.

So now Ithink about them dogs and cats
caged up at the county pound
and I know they're happy with the butcher
cuz that old roan has gone to ground.

On later rides, after Alan Platt's paint took him out into the middle of a pond when he was trying to water her and he then had to swim ashore, chaps and all ("The Painted Lady"), and Danny Warren's mare, with hobbles on, broke through the lunch line scattering cowboys up and down the hillside ("The Horse that Came to Lunch"), campfire attendees started requesting these poems to be recited so they could relive past events. It was a rough and tunble, but fun time. The Old West almost lived again.
Posted by R.T. Lawton at 00:01