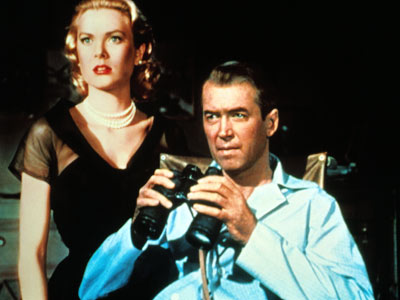 I think it's safe to say that most people enjoy the films of Alfred Hitchcock. Even my mother, who doesn't watch many movies at all, watches Hitchcock movies. It's not that suprising, really. He was successful for the same reason that writers like Stephen King are successful: their first priority is to entertain. Hitch knew how to hook viewers right away and keep them interested throughout the story.

For those of us who love his work rather than merely like it, there's a little bonus we get with every film. For some reason--probably egotistic--the Master Director himself appears on screen, for just a moment, in almost every one. In some of his movies you never know where the cameos might pop up; in the later ones, though, he decided to restrict most of those surprise appearances to the first few minutes of the film. Why? Because moviegoers had learned to watch for them. Hitchcock--always the professional--didn't want anyone to be distracted from the story, and if the cameo happened early, alert viewers could get it out of the way and direct their undivided attention to the plot.

I heard or read someplace that one Hitchcock documentary (a DVD bonus feature) mentioned plans for a cameo where Hitch and a deaf woman are walking down the street, and he says something to her using sign language and she slaps him in the face. I've watched most of those "special feature" documentaries on Hitch and his movies, and so far I haven't seen the one that talks about this--but I love the idea.

To Spot a Director

Anyhow, here's a recap of the fifteen most recent Hitchcock cameos. I started with 1954 for a couple of reasons: (1) I don't want to go all the way back to the late twenties, and (2) '54 was the year that two of my favorite Hitchcock films were released (I couldn't ignore those).

Rear Window (1954) -- He's winding a clock in the songwriter's apartment, seen of course from Jimmy Stewart's window. The songwriter, who's playing the piano at the time, is real-life composer Ross Bagdasarian, Jr.

Dial M for Murder (1954) -- My favorite of all his cameos. He appears in a framed photo of Ray Milland's class reunion, sitting in a tuxedo at a table with Milland, Anthony Dawson, and others. 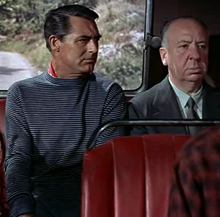 To Catch a Thief (1955) -- He's sitting beside and to the left of Cary Grant on the rear seat of a bus. Grant gives him a curious look, but Hitch stares straight ahead and neither of them says a word. On the seat to Grant's right is an old woman and a cage that contains two fluttering birds.

The Trouble With Harry (1955) -- One of the hardest cameos to spot. He's seen through a window, walking in a tan overcoat down a rural lane past a parked limousine. The old man who owns the limo is studying an outdoor exhibition of artwork while his driver waits beside the car.

The Wrong Man (1956) -- He is seen only in silhouette, while narrating the film's prologue. This probably shouldn't be counted as a cameo; according to a biography by Donald Spoto, Hitch chose to make an actual appearance rather than a cameo because this movie, unlike his others, was a true story.

The Man Who Knew Too Much (1956) -- He walks up and joins a crowd watching acrobats in a Moroccan marketplace. He's facing away from the audience and standing several feet away from Doris Day and The Man Who Would Soon Know Too Much.

North by Northwest (1959) -- During the opening title sequence, he rushes to a catch a bus but just misses it--it closes its door and leaves him standing at the curb.

Psycho (1960) -- He's seen standing on a Phoenix sidewalk outside Janet Leigh's office window as she opens the door and walks in. He's wearing what looks like a cowboy hat.

The Birds (1963) -- He's leaving a San Francisco pet shop with two white dogs on a leash as Tippi Hedren enters it. Moments later she meets Rod Taylor there in the shop, and the plot is afoot.

Marnie (1964) -- He steps into a hotel hallway after Tippi Hedren and a bellboy walk past. He looks at them a moment, then turns and stares straight into the camera.

Torn Curtain (1966) -- He's sitting in a hotel lobby balancing a baby boy on his right knee, and after several seconds picks the boy up and shifts him over to his left knee.

Topaz (1969) -- My second-favorite cameo. He's in an airport being pushed in a wheelchair by a lady in a nurse's uniform, and suddenly he stands up from the chair, shakes hands with a man in a dark suit, and walks away.

Frenzy (1972) -- He's in the middle of a crowd, wearing a black hat and listening to a speech, and is the only person not applauding. A minute or so later, he's shown in a crowd again, standing next to a man with a gray beard.

Family Plot (1976) -- He's seen in silhouette on the other side of a door, talking with--and gesturing to--another man.

And remember, that was less than half of them. In all, I'm told Hitchcock made 36 cameo appearances--37 if you count the opening of The Wrong Man--in his fifty years of directing.

For anyone who's interested, here are some useless facts involving Hitchcock cameos:

In many of them--at least ten--he was just walking through the scene, and in several (Spellbound, The Paradine Case, Strangers on a Train, and Vertigo) he was carrying cases for musical instruments. 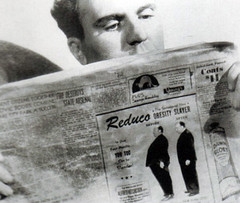 At least three cameos (Rope, Lifeboat, and Dial M for Murder) are especially interesting because most of the filming for each was limited to a single location, which also limited the opportunity for Hitch to "appear." I've already mentioned Dial M; the cameo in Rope was a through-the-window glimpse of him strolling in the street below and the one in Lifeboat was a newspaper ad showing "before and after" photos for a product called Reduco Obesity Slayer.

He had two cameos each in five of his movies: Suspicion, Rope, The Lodger, Frenzy, and Under Capricorn.

Don't forget TV: In an episode of Alfred Hitchcock Presents--"A Dip in the Pool"--Hitchcock is shown on the cover of a magazine being read by Philip Bourneuf.

Back from the dead: In Psycho II (1983), when Tony Perkins and Meg Tilly enter "Mother's" bedroom, Hitch's silhouette can be seen in shadow on the wall just before they turn on the lights. (He passed away in 1980.)

The Trouble With Copycats 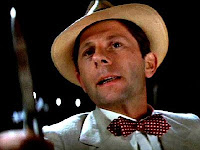 I think it's fun anytime I see directors appear in cameos in their own movies--Rob Reiner, M. Night Shyamalan, Ron Howard, John Carpenter, Sir Richard Attenborough, Oliver Stone, etc.--but I never see them without thinking of Hitchcock. And I usually enjoy the cameos more when they're very brief. If they're too long, they start calling too much attention to themselves.

One of my favorites is Roman Polanski as a thug with a switchblade in Chinatown--he's the one who causes Jack Nicholson to walk around for half the movie with a bandage on his nose. The cameo isn't short (although Polanski is), but I enjoyed it anyway. It's certainly memorable.