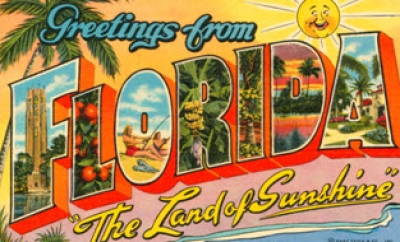 Stuart, Florida.  How desperate is your cocaine habit? Martin County police arrested Roman Blair on drug charges and found crack in his, er, crack. What an ass.

Melbourne, Florida.  While one dude had crack problems, another had streaks. Melbourne fugitive Matthew Ibarria was caught napping naked in Georgia. The (alleged) fool decided to outrun police and smartly turned onto a street that dead-ends at a river, where he bailed. Vans don't float and neither did Ibarria's excuses.

Elvis has Left the Asylum

Miami, Florida.  In 1990, Michael Conley was convicted of murdering a Canadian tourist at a Fort Lauderdale motel, but beat that rap due to prosecutorial error. Last month he was back in a motel threatening police SWAT, bomb squad, and FBI with ricin and C-4. He later blamed the threats on 'diabetic disorientation'. Conley is known for another crime: He's an Elvis impersonator who sang outside the courtroom during his murder trial. 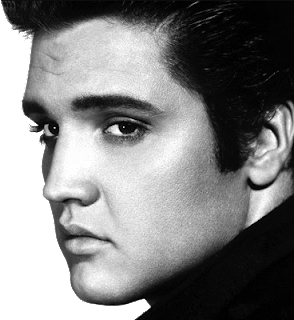 Naples, Florida.  It gets worse: A man monkeying around with a gun claimed to be Elvis' brother, a friend of George Bush, and director of the CIA, also told police he's part orangutan related through 'monkey blood'.

A top Miami senior honors student and valedictorian who's studying to become a heart surgeon and is courted by Ivy League schools, is caught up in the politics of the day. Even though Daniela Pelaez has lived in this country since the age of four and her father and brother (who serves in the US Army in Iraq and Afghanistan) long ago had been given legal residency, a federal judge last week set an example and denied her and her younger sister a green card and ordered the siblings deported to Columbia.

Shocked at this miscarriage, her fellow students made Miami proud, making posters and planning a protest, joined by Superintendant of Schools Alberto Carvalho. Congresswoman Ileana Ros-Lehtinen wrote ICE asking them to exercise restraint.

Even the White House made its concerns known. Vice President Joe Biden called the decision 'mindless'. He went on to say "Why in God's name would you want to take a kid with this talent and this capacity and deport her? It's against our national interest."

And ICE 'sort of' listened. They postponed Daniela's deportation for two years. It's not a perfect decision, but it's a start.

On a Sad Note

Sanford, Florida.  At one time, I had an Orlando neighbor who was in his mid-to-latter twenties. He obviously worked out heavily and he cultivated an intimidating stance in which he leaned forward, looming large toward those he was talking to.

Within the first few minutes of meeting someone and often after that, he'd inform people he was a former cop. "Why 'former' cop?" another neighbor mused. "At his age, that would be an awfully short career. I wonder if he was dismissed?"

Two weeks ago in the town of Sanford directly north of Orlando, a teenage boy was strolling down quiet, gated community streets of The Retreat at Twin Lakes, having bought an Arizona Iced Tea and Skittles for his little brother. Minutes after his purchase, Trayvon Martin was shot dead.

To date, there has been no arrest or even hint of an arrest.

There is no doubt who shot him; in fact, the killer readily admitted he killed the boy. The shooter used a licensed 9mm automatic. The killer also happens to be the 28-year-old captain of his Neighborhood Watch who, according to friends, is studying to be a cop.

And… the boy is black and the shooter is white.

Which brings up the question circulating here in Florida– why hasn't the shooter been arrested?

The man, George Zimmerman, violated several rules. First, Neighborhood Watch wardens are not permitted to carry firearms. Secondly, they are supposed to travel in pairs and aren't allowed to confront suspects. Thirdly, the police 911 operator apparently instructed Zimmerman not to follow the 'suspect' and not to leave his car. I say 'apparently' because authorities haven't released the 911 recording.

Zimmerman disobeyed all those instructions and a boy is dead.

His defense is… self defense. He claims he was within his legal rights both in confronting the victim and 'shooting in self-defense' with his legally permitted weapon. This against a teen armed with tea and Skittles.

Debate on the web has polarized: one side questions if Zimmerman was a gung-ho cop wanna-be who started a fight and was possibly getting his ass kicked, or if the boy was a troublemaker recently disciplined in school. Some have absurdly questioned why a teen boy was out strolling at seven on a Sunday evening!

Three things appear obvious to me. One is that Zimmerman can't claim a castle defense. The boy didn't attempt to enter anyone's home or car. His sin may have been WWB, walking while black.

Another is that few of us expect to lose a son on a quiet Sunday evening's stroll. The Martins certainly deserve to see the case in court.

And finally, a family's lost a child and a man his reputation. No matter what happens in the future, he has a death on his hands. There are no winners here.
Posted by Leigh Lundin at 00:01