Those who have lived on the edge and survived can probably tell you about times when their brain tingled or they had that "certain feeling." All of us are aware of the first five senses we use on a daily basis for everyday living, but what about that sixth sense, the one that tells us something is about to happen? Have you felt it? Was it correct? How did it affect your next actions?

My Mother often had premonitions. Naturally, the ones I heard the most about dealt with me getting into some kind of future trouble. In later years, I came to think the warnings she got from her premonitions had more to do with her neighborhood intelligence system of other mothers who kept track of the local kids, especially those boys most likely to indulge in some type of frowned upon behavior, plus whether or not the "good" kids were mixing with the "others." So no, in that case I don't really believe my Mother was fey, she merely had a good data base from which to project good possibilities. Now her full blood Prussian mother on the other hand was someone not to trifle with when it came to superstitions and premonitions.

But perhaps we should differentiate between "getting a feeling" those times when the brain has other information to input from your surroundings as opposed to the circumstances of "getting that feeling" out of the clear blue nothingness. To use an analogy from modern sci-fi movie culture, let's define the latter as a "disturbance in the Force." I choose this analogy not to trivialize the subject, but rather as the simplest concept for explanation. 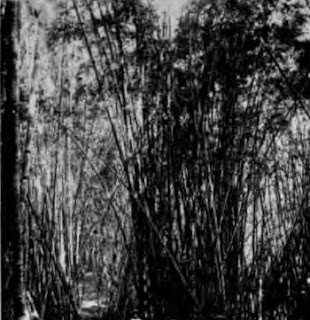 Llet's say you are in a squad of armed men patrolling in the mountain jungle several klicks from base camp. Your point man, the troop most experienced in booby traps and the ways of your enemy, leads your squad down into a valley with tall bamboo growth on both sides of the trail. The path is faint with no recent tracks from boots or other footwear, but it is known that other people have used this trail in the past. There are no obvious signs of mismatched dirt where the earth may have been dug up and a mine planted, and there are no patches of fallen vegetation which might conceal a punji pit or other booby trap. No wires found to trip a claymore mine, nor to slide a grenade, with its pin already pulled, out of the open end of a tin can tied to the base of a tree along the trail. Nothing at all to indicate that the enemy is waiting ahead to ambush you in the valley. Yet, your point man suddenly raises one fist and freezes like a statue.

Why? More than likely, his brain has been fed other information. Those living on the edge get spurts of adrenaline that make them super aware of their surroundings. They have also acquired habits of noticing the things that matter to their survival. Their ears become attuned to certain sounds, or the lack thereof. Their eyes tend to recognize patterns that aren't quite the way they should be. Sometimes, their sense of smell becomes more acute. And, their brains compute faster.

It could be that your point man has noted the sudden lack of animal or bird sounds in the landscape ahead. Maybe he smelled the enemy. There were those in Nam who said they could sometimes detect the aroma of rank fish sauce emenating from the enemy's sweat. Of course that can work both ways. In the Cav, we were told which soaps to use so as not to leave a distinctive odor on ourselves for the enemy to smell.

Whatever it was that tingled the brain of your point man, he feels that something is not right in this valley. He backs your squad away. Is this a matter of his sixth sense kicking in? I think so, but I also believe this is one of those situations where the man's super awareness of his surroundings may have fed other barely noticeable, minute information to his brain, and his brain alerted him to a danger ahead. He may not consciously know what that warning information consisted of or where it came from. And then again, he may have sensed a "disturbance."

As for the "disturbance in the Force" type of sixth sense, I don't know that I can explain why it happens. It's like a thought or strong emotion has been pushed through the air and the person on the other end feels a presence is there. Can just anyone pick up on this disturbance if the thought or emotion is directed at him or her? Maybe, if they are in the right state of mind and their brain is not distracted by something else. I do believe that those with their brains amped up from living on the edge are more attuned to detecting these disturbances, or whatever you want to call them. Several times in my working days, I had the distinct feeling of being stared at, turned suddenly and found a person from one of my cases, or a person who had developed an interest in me. Most occured at close range, such as inside a bar or restaurant, or across the street. At least once from a block away. It's an eerie feeling, but better to have it than to walk blindly into something.

In suspense, thriller and horror novels, you sometimes read about hair standing up on the back of the neck of one of the story characters when he feels he is being watched, or he feels something dangerous is about to happen. To me, that can be a real situation, but it has never been the hair standing up, it has always been the slight tingle in my brain.

What about you? Have you experienced the Sixth Sense? Or are you a skeptic? Me? I'm a partial skeptic because of all the frauds out there who use tricks of one kind or another in order to claim they have "special powers." I only believe in the parts I've experienced myself. That's all anecdotal evidence, but if you want a more scientific explanation, then see what modern psychology researchers have discovered recently in controlled tests : http://www.psychologytoday.com/articles/200007/is-there-sixth-sense
Posted by R.T. Lawton at 00:01