Most of the time, an undercover wants the criminal side to believe he really is someone other than that pesky occupational hazard known to them as law enforcement. However, there are also those times when the undercover needs to come forward and reveal his true identity, even if circumstances are not necessarily under the best conditions. This is one of those incidents. Surveillance had gone wrong and the undercover ended up playing the Lone Ranger. Or it could be a John Wayne part. Nah, in my mind, I like the image of Bruce Willis in the movie Last Man Standing, not to be confused with Tim the Toolman in a current TV sitcom by the same name. Although......

It was supposed to be a simple deal. Just me, my senior partner and a future defendant were in the bad guy's house. Several surveillance vehicles were parked up and down the street for backup. Negotiations for the contraband goods had finally been completed. Problem was, the bad guy was either one of those paranoid type people or he was being extra cagey. The goods were not at his residence, instead we had to drive over to another house. He made a quick phone call to tell them we were coming.

This last statement allowed both the bad guy and me to feel a certain amount of relief. The criminal was satisfied because now he only had to keep an eye on one person instead of two during the transfer of goods. As for my feeling relief, my partner and I had zero means of communication with our surveillance teams outside to tell them the deal was moving to another location. By staying at the house, my partner could run outside, after the bad guy and I left, and flag down one of the surveillance cars. Looked like a great plan at the time.

I drove the undercover government car with the soon to be defendant seated on the passenger side. We backed out of his driveway, made a left at the first corner, drove one long block, made another left and immediately pulled into a driveway on the right hand side of the street. With my tail lights still glowing red, I glanced in the rear view mirror and soon saw the parade of surveillance vehicles going past.

I turned off the ignition.

My new friend, let's call him Bad Guy #1, goes into the house we're parked in front of and quickly returns with a large cardboard box. Seated inside the car, he opens the box and shows me the goods. I'm satisfied.

At the rear of the government car, I raise the trunk lid and the light comes on. This is now the bust signal, because we aren't going to let this much money walk. I stand there, confident, with the trunk light illuminating my smiling face as I wait for the cavalry to descend upon the scene and deliver me from the hostiles.

After a while, I'm still standing there. My smile is starting to droop. Where the hell is the cavalry?

One, I realize that the surveillance cars missed my last turn into the driveway. They have obviously continued down the street, probably splitting up and commencing to search for their lost undercover. Uh-oh.

And secondly, I look over the top of the government car toward the house. There's a man watching me through the kitchen window. Uh-oh again.

Removing a thick envelope of flash money from the trunk, I wave the envelope over the top of the car for the inside man to see. Then I paste a smile back on my face as if everything is peachy keen. There's nothing for it now. I get back into the driver's seat, obvious envelope in hand.

"What's that?" inquires my soon to be enlightened friend from the passenger side.

"I don't believe you," says the criminal.

"Well, here's my credentials," says I, having extracted them from my pocket and displaying them in my most professional law enforcement manner like actors do on television.

"I still don't believe you," says the bad guy.

It then occurs to me that maybe the man has slipped into an extreme case of denial. All he needs is a slight nudge back towards reality.

"Well, here's my gun," says I, flipping the safety off on my nickel-plated Colt .45 semi-automatic.

"Okay, okay," he blubbers, evidently making a sudden return to the real world, "but I gotta tell you that the guy watching us from inside the house has a shotgun."

"In that case," I explain in a slow voice just in case I had been speaking too rapidly for him the other times, "you had best get down on the floorboards as small as you can get." Which as a new convert to belief, he quickly did. 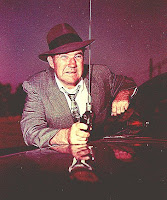 Then, in my best Broderick Crawford style from the old TV series of Highway Patrol, I crouched down in the V between my car and the open driver's door with my gun aimed over the hood and at the house.

"Federal agents," I holler, "come out with your hands up." I do all that in a command voice like I know what I'm doing.

To my surprise, Bad Guy #2, the one with the shotgun, appears behind the screen door in the front doorway. He stands there with a clear case of indecision.

Afraid that he too may be a sufferer of Denial Disease, I wave my gun and reiterate my demands at the top of my lungs.

Amazingly, the cure works. He leans his shotgun against the inside door frame and comes out on the porch.

I order him into the front yard.

In order to keep his mind occupied so he doesn't do anything stupid, I tell him to start doing pushups.

Wow, this is working great.

Now, Bad Guy #3 from somewhere inside the house picks up the shotgun and stands in the doorway.

Crap. This is starting to look like circus clowns getting out of a car.

I glance back at Bad Guy #2. He's still doing pushups. Must be the adrenaline, but then maybe he's never met a crazy guy with a gun. However, as I look over his back at the sliding glass patio door of the house next door, there's Mom, Dad and two little kids with their noses pressed against the glass to observe goings on in their quiet little neighborhood. Supper grows cold on the table behind them.

Bad Guy #3 is reluctant to come out of the house. I don't know, maybe he's allergic to pushups.

#3 hasn't seen a show like this before. He quickly decides that maybe pushups aren't so bad after all.

As surveillance subsequently explains, yep, they missed my turn into the driveway. They were only alerted to my possible location when one of them monitoring the local police radio band heard mention of an escalating disturbance involving firearms at a certain residence.

Botton Line: Sometimes it's tough when the undercover operative has to reverse course and come in from the cold, but the criminals don't believe who he really is. Like I said in an earlier blog, it's a strange world we operate in.
Posted by R.T. Lawton at 00:01

Email ThisBlogThis!Share to TwitterShare to FacebookShare to Pinterest
Labels: No No I Really Am...., R.T. Lawton

Again...great stuff, R.T. You've got some brass ones, I'm thinking. I love the push-ups, and you're right--this stuff can only happen in reality!

I like the pushups. It is way better than get on the ground face down.

Great column, R.T. I love this kind of thing.