"And the black killing of others (black and white) that apparently dominates your mindspace are miniscule compared to the number of white Americans who destroy themselves with drugs, the ocean of white killing of other whites, etc. Look up the statistics some time. Since the majority of the population is still white, more whites = more white crime = more white killings and suicides, etc.

You can say that George Floyd was a criminal - he was high on drugs and he apparently passed a bad 20. But here's the thing - in our country you're supposed to receive a trial before you're imprisoned, much less executed. You're even supposed to be presumed innocent until proven guilty. There might be more than one reason someone passes a fake 20: I have a 65 year old white friend who every once in a while receives a bad 20 in her shop. The bank never calls the cops. They simply inform her that it was bad and destroy it, and she's out 20 bucks.. And drug addiction is a disease that can be treated - if you can keep breathing.

The point is that cops should not be judge, jury and executioner. Their job is to make arrests, not executions. There is a wide variety of less-than-lethal force that can (and should, according to most training) be used before having to shoot someone, especially shoot them to death. Instead, we have seen some pretty trigger-happy cops. I think the most egregious example is Tamir Rice, 12 years old and playing with a toy gun in a public park, shot within seconds of the police arriving on the scene."

As it turns out, I was wrong about more white killings than black killings - they're about at a dead heat:
*Murder and non-negligent homicide: whites 5,070; blacks 5,660

But as for the rest:

As I said, the greater the population, the more crime will be committed by that population.

Anyway, I stand by my argument that cops should not be judge, jury and executioner: that's the job of the court system. I am a great believer in separation of powers, and wish we could see more of it. Presidents and Governors should not be deciding issues of guilt or innocence, constitutionality, etc. That's what the judicial system is for. Nor should Presidents and Governors be writing legislation; legislatures, both national and state, should.

Speaking of which, our Governor, Kristi Noem, did a "partial veto" of an anti-transgender law, and then tried to rewrite parts of it (she called it a "style and form veto") to only be against K-12 trans students (to keep the NCAA $$$ and ranking flowing to South Dakota universities). In other words, she was trying to have it both ways with the conservative crowd: "See, I'm still anti-transgender, but I have to be practical." The South Dakota legislature rejected her changes, and accepted her veto, so (thankfully) that's over in South Dakota until next year, when the usual suspects will again bring the usual anti-LGBQT legislation to the floor.

Okay, back to policing. 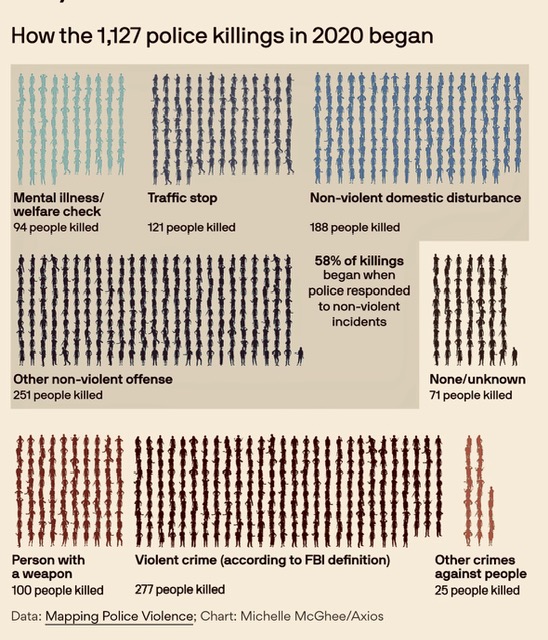 Looking it over, I can honestly say that I totally understand that a person with a weapon or in the midst of a violent crime or performing crimes against other people can end up being killed by police. It is a dangerous job. BUT that still leaves the majority of cases to that were none of those. So, looking that over:

I am among those who are very relieved that Derek Chauvin was convicted of all 3 counts.  I remember the first time I watched the video of Chauvin with his knee on Floyd's neck, rocking back and forth on that neck, Chauvin's hands in his pockets and smirk on his face, and at the time the only doubt I had in my mind was whether he was whistling "Dixie" to himself or "Another One Bites the Dust."

Meanwhile, we stigmatize mental illness and addiction, and give paltry funding for mental health programs of any kind, and then wonder why the mentally ill are out on the streets.

We fight a war on drugs while ignoring that the major gateway drug is perfectly legal alcohol, and then wonder why there are addicts everywhere we look.

We fight a war on drugs with weapons and jail and prison time, while providing a minimum of money for counseling and/or treatment centers, and appallingly little health insurance coverage for them, and then wonder why addicts relapse all the damn time.

Surely to God we can do better than this.

*Also, whites commit suicide at a higher rate than any other race: In data released in 2017, the rate for white Americans was around 19 per 100,000, and it was about 7.1 for both Hispanics and Asian-Americans/Pacific Islanders, and 6.6 for Black Americans, according to the Centers for Disease Control and Prevention. 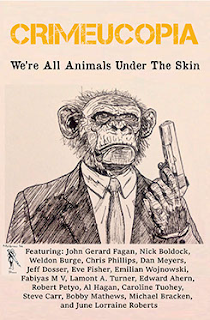 BSP: My story "Collateral Damage" will be appearing in Murderous Ink Press' Crimeucopia: We're All Animals Under the Skin.  (Our own Michael Bracken is in it as well.)

Linda Thompson is stunned when someone transforms her joke about a drive-by shooting at an AA meeting into reality. Drugs and exes, bikers and beatings, neighbors and old memories all put Linda on a twisted search that may solve the mystery, or get her killed.