by Joseph D'Agnese
Back in the 1980s a college English professor of mine shared a “stupid Hollywood” story with our class. Some genius producers released a TV mini-series on the life of the outlaw Jesse James. Whoever wrote the script read a bunch of history books to do their research. Only problem was, one of the books wasn’t nonfiction. It was (oops!) a novel. In Hollywood terms, history is free for the taking; fiction isn’t. “So now the lawyers are talking,” the professor said, his voice oozing schadenfreude.

I was much older when I finally encountered the 1983 novel the professor was probably referencing: The Assassination of Jesse James by the Coward Robert Ford. The author, Ron Hansen, frequently incorporates nonfictional elements in his fiction, with astonishing results. His book was the (intentional) source of the 2007 Brad Pitt/Casey Affleck movie, which reproduced much of Hansen’s gorgeous language. One of my favorite parts of both the movie and book is the lyrical description of Jesse’s character that opens Hansen’s book. (You can read much of it using Amazon’s Look Inside feature here.)

I’m a sucker for the fiction/nonfiction mind-meld. I remember reading E.L. Doctorow’s Ragtime as a kid and hitting the part where magician Harry Houdini enters the life of the fictional family at the center of the book. After about a page of this, sixth-grade me stopped dead in his tracks, obsessed with knowing, “How much of this is true?”

Here’s the answer older me would impart to that young reader: Who cares? It’s fiction!

My latest story (“Mr. Tesla Likes to Watch,” AHMM, May/June 2021) features Nikola Tesla and Mark Twain working independently to solve a mystery in 1890s New York. The men have a gentleman’s wager going. Whoever cracks the case buys the other a dinner at Delmonico’s. 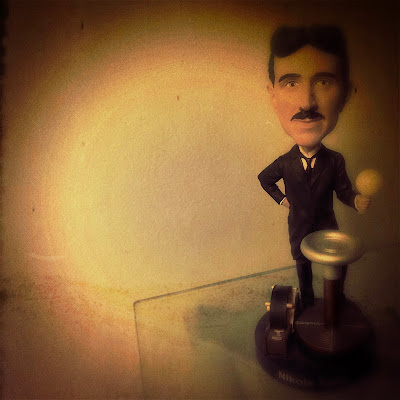 I’ve wanted to work them into a story ever since I discovered a truly atmospheric photo of the two of them together in Tesla’s workshop. (No, not the ones shown here.) I’m linking to the photo rather than post it here, on the advice of counsel at the firm of Sleuth & Sayers, Esq. Go look at the pic. I’ll wait. Cool, huh? That photo alone sent me on a research spree.

Things I did before writing the story: 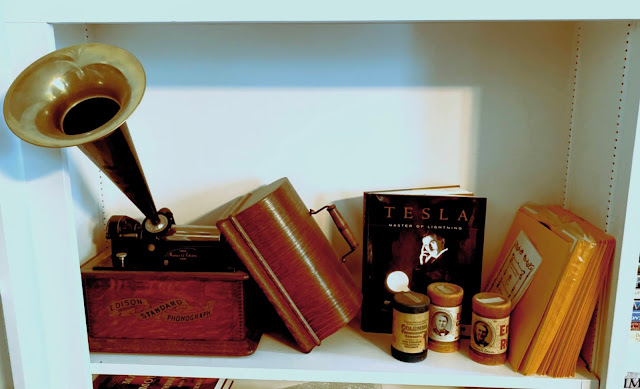 I stopped researching there. I’ve learned over the years that I’m an obsessive over-researcher. Once, determined to write a book set in Vietnam-era New York City, I convinced myself that I could not possibly start writing a word until I’d read a 900-page volume on the administration of Mayor John Lindsay. No sooner had I finished that book than I was certain—certain, I tell you!—that I had to read two of a three-volume biography on Richard Nixon. Thankfully I stopped before I did, realizing that maybe I had a little problem.
My brain now marinated in Twain/Tesla lore, I set aside my notes, and wrote the damn thing, choosing deliberately to fudge facts along the way. For me, the freedom to fudge was the only way to have fun writing such a story. Fudged fact: in the story I say Tesla walked Manhattan daily, dropping a thermometer on a string into the Hudson and East rivers, to see if their temperatures varied. Totally not true, but it seemed to fit his eccentric character, so I went with it.
I know many writers have devoted much of their work to the historic-figures-as-detective subgenre. Tesla, because of his seeming wackiness, shows up in tons of novels, often in the science fiction and fantasy genre. (Did you catch the late David Bowie’s portrayal of Tesla in the 2006 movie, The Prestige? That film was based on a novel by author Christopher Priest.) But that’s just a start. Without really trying, I poked around online and found mysteries that team Tesla with Arthur Conan Doyle, or Doyle with Houdini. I bet I would love reading those books, but I’m not sure I could maintain enough interest in a specific real-life figure to devote more than one of my own stories to them. A complete mystery series? No way. 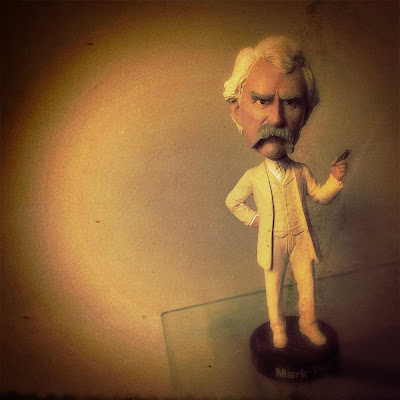 For me, the joy of using a historic figure boils down to nailing those peoples’ eccentricities, and finding neat ways to play with them. Twain is legendary for his witty one-liners. In writing his dialogue, I repurposed some things he did say, and invented a few of my own.
My social life is filled with news of the exploits and projects of various narrative nonfiction writers. The journalist in me loves reading their work and seeing how they pulled together mountains of abstruse research to fashion a highly readable historical account. But historical mysteries are freeing precisely because they can be whimsical.
Also, in writing this story, I experienced a difference in focus. In a typical story, I’m primarily working to fit together pieces of a plot. In this story, that primacy shifted to character. I had these parts (i.e., a real person’s known tics or backstory) and I was working to see how I could layer them into the story. How would Twain sound talking about a case? How would each man’s expertise impact the way he investigated that case? Who would be more methodical? Who unwittingly becomes the Watson?
I answered these questions for myself, as you’ll see. But now that I’ve done so, I’m not sure I could return to those characters again. The novelty has worn off, in a sense. On a second outing, I worry that their behaviors would come off as shtick, not charming. And of course, I’m wary that other writers have used these men as fictional characters.
But who knows? There was one amazing letter real-life Twain wrote real-life Tesla that blew my freaking mind. It could be easily turned into a story…or a book…or a movie… The only problem is, it’s so strange no one would ever believe it was true. Which how we got here in the first place. 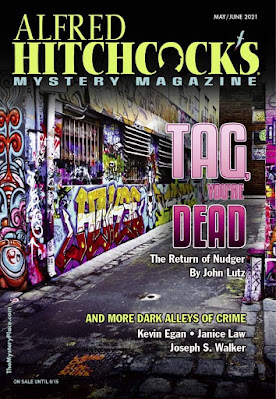