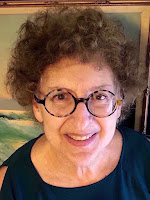 Every time I think surely everyone knows what schizophrenic means, I hear someone in a novel—or in life, for that matter—say, "I'm schizophrenic," meaning anything from, "I'm in two different minds about this," ie ambivalent, to, "Sometimes I'm like two different people," ie, metaphorically variable in mood and/or behavior. The origin of the psychiatric term, "schizophrenia" is indeed "divided mind," but the disorder today's mental health professionals diagnose as schizophrenia has nothing to do with that.

According to DSM-5, the latest edition of the Diagnostic and Statistical Manual of Mental Disorders, schizophrenia is "a severe and chronic mental disorder characterized by disturbances in thought, perception, and behavior." It comes with delusions, hallucinations, disorganized speech, and/or "grossly disorganized or catatonic behavior." To keep it straight, remember it's a thought disorder rather than an affective or, in lay terms, emotional disorder. Before cell phones got popular, most of the people talking to themselves on buses were probably schizophrenics conversing with their auditory hallucinations. "Ideas of reference"—thinking the person on the TV is talking to you personally—is something a schizophrenic might think.

While the closest I think a person gets to what most of us think of as crazy is people with thought disorders and psychotic symptoms, such as chronic schizophrenics, many of them, even while they're being treated, don't think they're crazy. In fact, I've met many who were afraid the medications doctors gave them would make them crazy. They also thought that street drugs would make them better, a fantasy too many writers romanticize.

Now let's talk about "being two different people," or that "rare disorder," "split personality." First, it's not a rare disorder. It stopped being rare as soon as people started believing the people who reported having been sexually abused is children, which is how it usually starts. When helpless people, especially the very young, experience trauma they can't cope with or comprehend—sexual abuse and torture—they survive by dissociating. Their minds take part of them to another place, where what's happening to their bodies has nothing to do with them. This dissociation takes root and becomes a powerful coping mechanism. In extreme cases, it becomes what's now called dissociative identity disorder (formerly split personality disorder). Typically, there's a main personality who's unaware of the existence of alters, ie from a couple to dozens of personalities that coexist in the adult's mind.

Writers and, unfortunately, some therapists may romanticize the alters, wanting to grant them "freedom" rather than understanding that they are truly parts of a single person and that the therapeutic goal must be integration. While the main personality may be a competent, conventional adult with an ordinary job and a family, one alter might be a brawler, another a prostitute, another the frightened four-year-old who was molested. Not all the alters may have the same sexual orientation. Some alters may want help, others may not. But even if it's not apparent, that main personality is missing some important aspects of wholeness.

I've come in contact with DID a couple of times in the course of my career as a mental health professional. The first time, I was working in a hospital alcoholism treatment setting in which most of the medical and psychiatric team didn't "believe" in DID. The patient seeking treatment for alcoholism had been convicted for molesting his ten-year-old daughter. He said he had no recollection of doing so but believed he must have done it and was filled with remorse. He came from an extremely strict religion, community, and family. After ruling out memory loss due to drinking and working with him for a while, I suspected that he had been severely abused as a child and was suffering from DID. My guess was that an alter he was unaware of had committed the abuse.

In my online practice, a woman with a very chaotic family life came to me for therapy. My antennae went up when she signed her email with one name and paid from the Paypal account of someone with the same last name but a different first name. As she told me more about her history, she revealed she'd started an affair with an uncle at age ten, but assured me it was not abuse because they "really loved each other"—one of the fantasies with which predatory adults "seduce" children. When a pedophile successfully cons a child, it's still child molestation. At other times, she wrote letters that seemed to come from different alters, refused to take certain actions in her marriage because "it wouldn't be fair to the others," and admitted she'd been told before that she had DID, but that she didn't believe it. When she stopped coming to treatment, I emailed her, gently encouraging her to return. She wrote back, saying, "We don't need therapy." That "we" spoke volumes.

Dissociation isn't always so extreme. You've experienced it yourself if you've ever been lost in a good book or gone into road trance. Schizophrenia, on the other hand—well, if you hear Rachel Maddow say, "Leigh, that's you I'm talking to!" you may want to get yourself checked out.
Posted by Elizabeth Zelvin at 00:00