The Man Who Almost Wasn't There 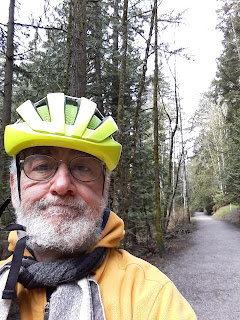 I have been having trouble with a story I am thinking about writing.  Nothing odd about that, but the type of trouble is unusual for me.

This story is more or less a traditional mystery, meaning the protagonist follows a set of clues to figure out who is behind a crime.  Of course, this is exactly what people who don't read mysteries think a mystery is.

By my calculation, of my most recent ten published stories, only one falls into this category.  And some might consider even that one a stretch.

Usually when I work on a story of this type it proceeds in this order: a premise, a character who could work with that premise, and then the plot, i.e. clues.  I hate clues.  Dreaming them up is misery for me.

But in this case I have the premise and the clues were a cinch.  But my character remains a cipher. This is an amateur sleuth story, but all I know about him (because it's baked into the premise) is that he is a middle-aged man who lives in the country and keeps to himself.  Works at home or doesn't need to work. That's it.

I feel like he needs more connection to the story, to the crime he is trying to solve.  Sure, a good person would want the bad guy to get caught, but that doesn't justify all he does.  He needs some skin in the game.  The reader needs to care whether he keeps working on the case or just leaves it to the authorities. Got any ideas?  I came up with three, or rather, three categories.

1. Danger.  Our hero is: a. in the Witness Protection Program, or b. in hiding for other reasons.  That builds enough suspense that we don't need more reason to care about what he's doing.

2. Personality.  He is: a. an extreme introvert, b. suffering from OCD, or c. dealing with some trauma, such as the death of a loved one.  Although he doesn't think of it this way, the case is helping him work on an issue.

3. Redemption. He feels guilt about something in his past and trying to solve the crime gives him a chance to make up for it.

I think I am heading to 3., being a sucker for redemption stories.

Now I just have to write the damned thing.