Lately some of my SleuthSayers colleagues have been discussing their recent short stories and the way they were written--either the ideas that spawned them or the genres involved or the styles used, etc.--and I've found every one of those posts fun to read. Like novels, every story is different, to both the writer and the reader, and behind-the-scenes glimpses can be interesting.

At the moment I have stories in the current issues of (I think) six magazines, but I'll talk about two of the most recent: "Friends and Neighbors" in Alfred Hitchcock's Mystery Magazine and "Fool's Gold" in The Saturday Evening Post. 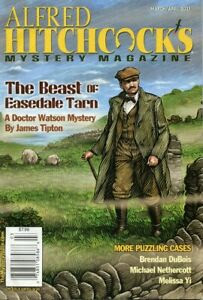 "Friends and Neighbors" (March/April 2021 issue) is my 21st story in AHMM, and the fifth installment of a series I've been writing about Sheriff Raymond Kirk Douglas and his ex-lawyer girlfriend Jennifer Parker. In this one, which is about 3300 words, Ray is struggling with two different mysteries--one at the request of an old friend who's a police officer in another town and one involving Jennifer and a cousin who's trying to cheat her out of part of an inheritance from a recently-deceased aunt. There are no murders in this particular story, but plenty of misdeeds: thefts, break-ins, forgeries, impersonations, lies, betrayals, etc. (Welcome to small towns and dealing with relatives.)

A lot of this story is dialogue, which is always a treat for me as a writer, and it has a fairly lighthearted mood. And, like the other stories in this series, it's set in the contemporary south and written in first-person, from the viewpoint of the sheriff. A quick note, here: I write in several different genres and time periods and most often write in third-person POV (either single or multiple). Anytime I choose to use first-person, the story is usually present-day and the viewpoint character is a male. I'm not saying I would never write a first-person story that's set in the distant past and has a female protagonist, but I don't think I would feel as comfortable and confident if I did. I'm not sure I could relate closely enough to, say, a princess in medieval England to try to tell a story in only her voice. What do some of you think about that issue? Is it even an issue?

One thing I've been experimenting with, in the Ray Douglas series, is occasionally incorporating multiple mysteries into one story. Here's how that's going, so far:

Story #1 of the series, "Trail's End" (AHMM, July/Aug 2017), involves only one plot: trying to solve a murder with four different suspects. Three of them are circus performers, which might say something about my mental state when I dreamed up the story.

Story #2, "Scavenger Hunt" (AHMM, Jan/Feb 2018), is the first to include more than one mystery. This story includes three: a con-game attempt that starts things off, a department-store robbery in the middle, and a murder at the end.

Story #3, "Quarterback Sneak" (AHMM, Mar/Apr 2020), features one mystery, involving a murder disguised as a drowning and a unique way of hiding the victim's body.

Story #4, "The Daisy Nelson Case" (Down & Out: the Magazine, Dec 2020), also has only one plot--a locked-room murder mystery--but is still one of the longer stories in the series.

Story #6, "Going the Distance" (accepted by AHMM but no pub date yet), involves only one mystery: a dead body discovered on a snowy highway.

Story #7, "The Dollhouse" (accepted by AHMM but no pub date yet), has two mysteries: a school bullying/intimidation incident and the murder of a local lawyer.

Story #8, "The POD Squad" (submitted to AHMM but no verdict yet), features three mysteries: a jewelry-store heist, the theft of a cellphone at a science fair, and a home robbery/assault.

My point is, I've had fair success lately with blending several different cases, puzzles, and plotlines into the same story, at least now and then, and making them somehow tie together. It's sort of a juggling act, but it feels right. Have any of you tried doing this? 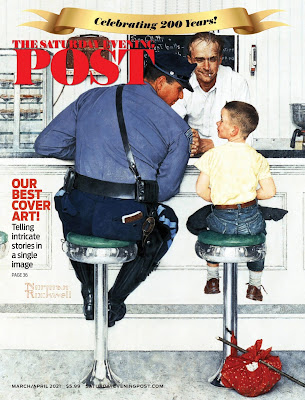 Another story out right now is "Fool's Gold," in the March/April 2021 issue of The Saturday Evening Post. The print edition of the Post publishes six short stories a year, one in each bimonthly issue. This is my ninth story there, seven of which have been in the mystery/crime genre. (With the exception of some strictly literary magazines, I think most publications--whether they say so or not--are receptive to stories with some mystery/suspense elements. How could anyone not like those, right?)

"Fool's Gold" is a mystery only if you apply Otto Penzler's generous definition, which says (and I'm paraphrasing) that any story with a crime central to its plot can be categorized as a mystery. Truthfully, this story is more of a Western. I could say that it's historical crime fiction, which would also be true, but let's be honest: it's a story set in the Dakota Territory in the late 1870s with gunmen and horses and saloon girls and prospectors. And if a story looks like a Western and quacks like a Western, that's probably what it is.

I will also say this, though. It's one of my favorite stories ever, and one that I had a great time writing.

As for specifics, "Fool's Gold" is a standalone story of about 3800 words, it includes (again) a great deal of dialogue, and it's told in third-person limited. Part of the fun, for me, was that one of the main characters and four or five off-screen characters are real historical figures who lived in that place at that time. Fitting those people into the story was enjoyable as well as challenging, and I suspect that might've been one of the things that helped the Post decide to buy it. Maybe "historical fiction" or "period piece" was in their minds at the time, rather than "Western." 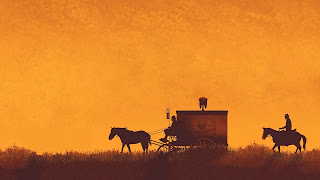 Other stories I have in current issues of magazines are "The Big Picture" in Black Cat Mystery Magazine, "Nobody's Business" in Strand Magazine, "The Daisy Nelson Case" in Down & Out, and "Twenty Minutes in Riverdale" in Pulp Modern. All these are mysteries, with others of several different genres coming up in Mystery Weekly, AHMM, St. Anthony Messenger, the Strand, Woman's World, BCMM, Sherlock Holmes MM, Hoosier Noir, and others. I also have a story, "Tourist Trap," that went up this week at Pulp Modern Flash. If you happen to come across any of these, either sooner or later, I hope you like them.

Please let me know, in the comments, if you have any stories in current or upcoming publications, and where I and our readers might look for them. And how about non-mystery markets like SF, horror, fantasy, romance, Western, and literary? Do any of you write for those, or are you considering it?

Whatever kinds of tales you're creating and wherever they appear, congratulations to all who are writing, submitting, and publishing, and thanks to those who are reading. Keep it up!

I hope you're having as much fun as I am.