The Language of Thieves 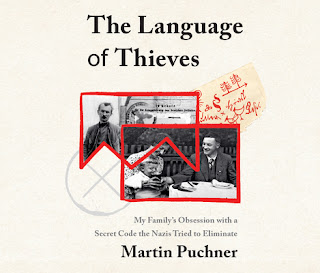 My pal Carolyn first noticed this story in Psyche.  It’s popped up in some other places, and eventually made it into CrimeReads, so it hasn’t been flying under the radar.

Martin Puchner is a linguist who teaches at Harvard, and his book The Language of Thieves is a about a slang going back to the Middle Ages, called Rotwelsch.  It borrows from Yiddish and Romany, but it mostly seems to be German in origin.  It’s a language of the road, of tinkers and other itinerants, people who were mistrusted by folk who lived in housen: Gypsies and Jews, hoboes and fugitives.

The secrets of Rotwelsch make for a fascinating history, but there’s another thread, which is the determined effort to stamp it out.  The first part is that it’s regarded as a criminal argot, and the second is that it’s tainted with Jewishness.  You won’t be surprised that the Nazis have a cameo.  The point is that clannishness (and hiding in plain view) is protective coloration.

Here are the links.  (I bought the book.)