I entered the modern age of publishing this week when I pushed the publish button and committed ten Madame Selina short mystery stories and her only novella to Amazon Kindle. It was not a terribly difficult process but it would have been easier if I had not decided to simultaneously make an ebook on Apple's Pages, lured by the thought that the Pages file could be easily converted to an ePub file. Not exactly easy was my experience, although I did wind up making the ebook cover for Kindle on Pages. 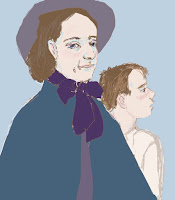 That was an interesting experience, too. A number of years ago, I sketched Madame Selina, New York City's premier spirit medium in the years after the Civil War. While the many fine illustrators who depicted her have stressed youth or eccentricity – flying hair being a favorite device –  I drew her as she usually saw herself, as Mrs. Hiram Bingham, respectable widow and business woman. However, even someone as poor at promotion as I am realized that this image would be a selling point.

I tried making her younger and Nip a tad weirder but that didn't suit either, although he does frequently get to carry her baggage. Finally, thanks to my new iPad and Procreate, a fine paint program, I reworked the original sketch, making Madame younger, darker, and more exotic and giving her an elaborate hat and an inky backdrop. I hope she'll do! 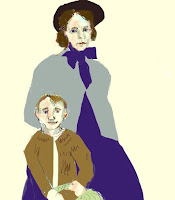 Madame Selina is a favorite character of mine, although she was not the focus of the original story which is narrated by Nip Thompkins, formerly resident in upstate New York orphanage. He is sprung from this sad and unhealthy institution when she comes looking for a likely boy, small, smart, and agile. Nip, underfed but otherwise healthy, is declared suitable. Whisked away to the city, he assists in creating Madame's theatrical illusions and narrates what became her many adventures.

It is popular now to have unreliable narrators. I've tried that and it can be fun, but in writing the Madame Selina stories I realized that my real preference is for the innocent eye that, lacking adult preconceptions, appreciates wonders and spots pretension. Nip, clever, practical, and definitely lacking any mystical bent, proved to be ideal for describing Madame, who, as Nip tells us, is 'willing to lie in small things' such as special effects to enhance a seance, but who absolutely and completely believes in Aurelius, late emperor of the Romans, her spirit contact in the other world.

All this was not pure invention on my part. Victoria Woodhull, pioneering feminist, candidate for president, advocate of both free love and votes for women, conducted conversations with Demosthenes, the great orator of Ancient Greece, and, like Madame Selina, advised the bulls and bears of Wall Street. In Woodhull's case, the clientele included Commodore Vanderbilt. Apparently gentlemen who gamble are not averse to spiritual guidance.

The period immediately after the Civil War with its staggering death toll, ghastly injuries, and traumas of all sorts for troops and civilians alike, was the great era of spiritualism and of mediums, as the desperate bereaved sought to know their loved ones' fates. That was the setting for "Madame Selina" and there she would have stayed if Rob Lopresti had not suggested she would make a good series character.

I was skeptical – or maybe Nip was – but I came around to the idea and made use of many years of teaching romantic and Victorian literature to find plots for Madame in inheritance tangles and vulnerable child heirs, the politics of the Irish immigration, the difficulties of Freedmen post war, the new Italian arrivals, and the suffrage movement.

Madame proved fit for all until changing times and the vulgarity and avarice of the high Gilded Age weakened the public's appetite for spirit communication and led to the final entry in my little book, " A Fine Nest of Rascals", where Nip, grownup and a cub reporter on a paper aiming "not to instruct but to startle," proves to have learned a lot about investigations from assisting Madame Selina. 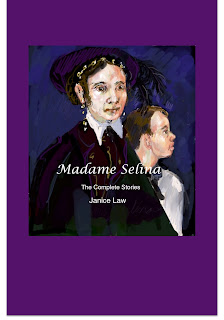 Madame Selina, The Complete Stories is available as an ebook on Amazon.