Between the ages of about six and fifteen, I spent my Saturday afternoons at the Court Street Theater, five blocks from my house. I watched at least 1000 films. Back then, network prime time featured films both Saturday and Sunday nights, and I saw a lot of them, too.

I discovered fairly early that I seldom liked the film version of a book as much as I liked the book. Later, I became heavily involved in live theater. Over the course of 30 years, I acted, directed, produced, designed, and helped build over 100 productions throughout central Connecticut. On those rare occasions when someone tried to turn a novel into a play, that tended to be a bad idea, too.

Because the three art forms rely on different elements. Stories use words, which create images and emotions in the reader's mind and often rely on their style to make their point. Plays use movement or behavior, often in the context of time and space (the stage). Films function through images.

The Great Gatsby is one of my favorite novels, and I've seen five or six film adaptations, none of which satisfied me. Fitzerald's use of biased narrator Nick Carroway doesn't translate well to the screen. I know there is a stage version of the novel, a musical, no less, and I have avoided it. That concise little book, barely more than a novelette, doesn't need heavy-handed jazz production numbers to convey its ideas. There's also an opera, but let's pretend I didn't mention it.

A story with a distinctive or idiosyncratic style doesn't translate to film or the stage (the film version of One Flew Over the Cuckoo's Nest is a glaring exception, and I loathe the play). I've seen several bad attempts to put Wuthering Heights on film (The famous Laurence Olivier and Merle Oberon version clearly does not understand the book). Both Huckleberry Finn and To Kill A Mockingbird have successful film versions, probably because even though they are also 1st-person POV, the characters relate events that happen outside themselves. Horton Foote took liberties with Mockingbird, but they relied on words AND IMAGES. When I showed the video in class, I knew at least one student would tear up when Gregory Peck walked out of the courtoom and a black spectator told Scout, "Miss Jean Louise, rise. Your father is passing." 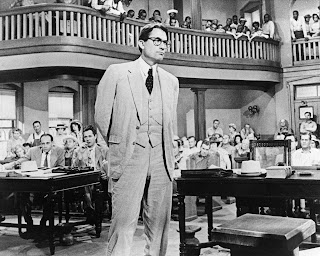 If that didn't get them, Scout's greeting Robert Duval in his film debut as the shattered Boo Radley always did. "Hey, Boo." Cue the tears. Both  powerful IMAGES supported by words.

When I advised the high school yearbook for several years, I trained myself to be a decent (never more than that) photographer. You can learn composition and cropping. I could never write a screenplay because I'm not visual enough to tell a story through what the audience SEES. I never designed sets back in my theater days because I can't visualize space. Since plays use movement ("Blocking") to help tell the story, you need to translate ideas into motion. By directing 20 plays in as many years, I got better because I figured out how to choreograph movement, but it was a huge weakness in my early work. I learned to move people with the rhythm of the lines and scene, often on a beat change or to emphazise a particular speaker or line. Camera angles do that on film with a good director or editor, but can you connect the visual rhythm to the story's pace? Only if it's mundane writing.

Sometimes, the unreal quality of a play gives it its power, and a film image is too literal. John Pielmeier's play Agnes of God has three characters, one who is both narrator and protagonist. The entire set consists of two chairs and a standing ashtray, and the theatricality makes it all work. My daughter gave me the film version on video years ago, but I never watched it. I'd seen my wife play Agnes on stage and I didn't need to see Hollywood put the bloody wastebasket where the baby was supposedly found in a close-up.

A theater I worked with for years presented an early STAGE version of High Noon. 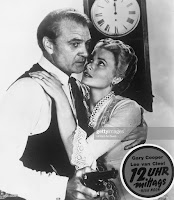 Thankfully, I never saw it. Imagine trying to put on stage that series of jump cuts as the film reaches its climax: The clock's pendulum swinging, Grace Kelly waiting for the train, the bartender and other men in the bar, the bad guys waiting for their leader, Gary Cooper writing his will in the Marshal's office, the clock, the bar, the bad guys, Grace Kelly, Katy Jurado, the church congregation, all with that orchestrated version of the title song, the beat synchronized to the pendulum...and then the train whistle that freezes your heart in your chest.

The two final visuals. Grace Kelly embracing Gary Cooper, the wedding ring on her finger. Then Cooper staring at the towsnpeople who refused to help him while he drops his badge in the dust.

The film is based on a story called "The Tin Star." I've never read it.

Cornell Woolrich's short story "Rear Window" has many built-in problems, but Hitchcock figured out how to make it less static with camera angles on film. Alas, a few years ago, a play version was commissioned, or should I say, "committed." My wife played one of the apartment dwellers in the world premiere at Hartford Stage (maybe the only production ever), with Kevin Bacon as the photographer. He was excellent, but he was stuck in a wheelchair on a large stage. The star of the show was the computer-operated back wall that moved up and down so the audience could peer into the neighbors' apartments. It cost $300,000 to build that set, and I don't think anyone has produced the show since...and rented the set so HSC could recoup some of the cost. 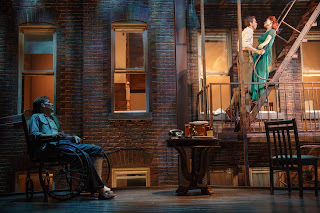