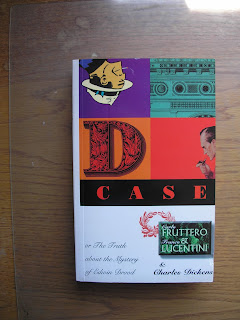 The D Case by Carlo Fruttero and Franco Lucentini presents an intriguing bibliophile premise. They bring the great fictional detectives together at a consortium in Rome to re-read, analyze, and eventually solve the unfinished Charles Dickens novel The Mystery of Edwin Drood.

During the course of the action, we see Sherlock Holmes, Hercule Poirot, Arsene Lupin, Father Brown, Inspector Maigret, Pirfory Petrovich from Crime & Punishment, Philip Marlowe, Lew Archer, Nero Wolfe, and a few others. The only major sleuths I don't remember seeing are Ellery Queen and the cops of the 87th Precinct.

I remembered my introduction to many of these characters from my parents' bookshelves and coffee table. My mother loved Agatha Christie, Margery Allingham, and Rex Stout. I read all the existing Hardy Boys books between my tenth and eleventh birthday and receieved The Complete Sherlock Holmes for my twelfth birthday. I still have that book. As you can see, the binding is held together by duct tape. 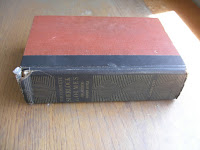 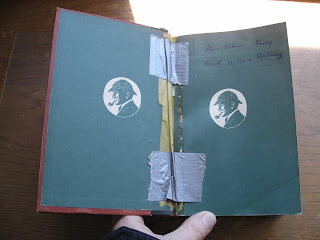 Even at an early age, my reading ear was well-developed and I had definite likes and dislikes. I never liked Agatha Christie much, and I know now that it was because her dialogue sounded wooden and her characters felt like cardboard. The women were all either 12-year-old virgins or latent doms. I liked the early Holmes stories, but felt they went downhill after he went over the Reichenbach Falls, probably because Conan Doyle himself lost his enthusiasm. I discovered Nero Wolfe when I was 12 or 13, and always liked those books more. Now I know that Rex Stout was also from the Midwest, so our rhythms were similar.

Reading The D Case showed me something else that I'd never thought about. Another reason I never cared much for Poirot or Holmes is that Hastings and Watson always came across as so profoundly dull. They were the stereotypical stolid Englishmen with no imagination or creativity, and they bored the hell out of me. They spent page after page in arias extolling the brilliance of their companions, but did little else for the stories. Well, Watson had his service revolver. But they were so dull they weakened their heroes.

It's pretty much axiomatic that a hero gains his stature from the strength of his antagonist. A great villain demands a great hero. But if the people trying to solve the case can barely dress themselves, the guy solving that crime only needs to be able to tie his shoes.

All the cops in the 87th precinct were good detectives who spoke human dialogue and had real-life problems. Ditto Mrlowe and Archer. Nero Wolfe was an insufferable egomaniac like Poirot, but Archie Goodwin, Saul Panzer, and the other operatives were sharp investigators in their own right, and Archie only  put up with so much of Wolfe's attitude before calling him out on it. I always liked Wolfe more because he really did have to be better than Archie and the Cops. Those cops were a little narrow-minded, but they weren't cretins like Lestrade.

Look at the detectives who had to carry the load themselves without a shuffling minion to look up to them. My current favorites include Lehane's Kenzie and Gennaro (now retired), Don Winslow's Boone Daniels, and Karin Slaughter's Will Trent, who has to cope with his dyslexia. All these characters are solid investigators with capable help and no fanboys in sight.

Call me elitist, but I like them a lot better.
Posted by Steve Liskow at 00:01