Another Day in Paradise


by David Edgerley Gates
I used to have a theory that the defining characteristic of a successful television series was the comfort factor. I don't think this is actually an original idea of mine, but likely somebody else's observation I've appropriated. If you take a show like Rockford, or Murder, She Wrote, or Magnum, it's a relationship, and you build on familiarity. It's about your engagement with Jim Garner, or Angela Lansbury, or Tom Selleck. Pause for a moment and consider that Columbo was originally conceived as a vehicle for Bing Crosby.

So if first we have character, then we have circumstance. To what degree is any given series situation? The term was coined to describe the half-hour comedies that came after Lucy, and Gleason's Honeymooners - even thought those shows were ensembles, and very much dependent on situation. In this case, though, we're talking situation drama, distinct from soaps. These are programming definitions, and not all that useful, except as shorthand.

Taking, again, Magnum for our template. Tom Selleck says the concept was a kind of James Bond party boy, beating women away with a stick, hot cars and vodka martinis, and Selleck was, No, been there, done that. How about beer and a Tigers cap, or the guy gets conked on the head a lot, he's even kinda slow on the uptake, from time to time? In other words, more like the rest of us. Then we begin to discard the other generic conventions. Higgins is an awful stiff, with only one note, the aggrieved and aging queen. John Hillerman clearly loses patience with this pretty early on. T.C. and Rick are there for what, protective coloration? This, too, goes by the boards. The dynamic of the show turns collaborative. It's character-driven.

Now, what if we turn this back to front? Suppose we take a situation that's character-driven, and keep changing the cast? This is Death in Paradise. It has some similarities to Murder, She Wrote, for one. It's not singularly gruesome, and mostly has a light touch. Nor does it break new ground. It's formulaic, and follows an established pattern. But consistency works in its favor. It's closing out the ninth season, and headed for ten.

The premise is a fish-out-of-water story. A cop from London, a detective inspector, is assigned to a somnolent Caribbean oasis. There's a lot of French heritage mixed in, but it's part of the British Commonwealth. (The show is an Anglo-French co-production, and actually shot on Guadeloupe and nearby islands.)

We have the expected culture clash, but the charms of the place turn out to be irresistible, and even the flintiest of hearts begins to soften. The other underlying commonplace is that our visiting fireman has the nearly magical ability to read the runes, and rescue clarity from the jaws of disorder.

I know I'm not alone in thinking the first two season were the best, because of Ben Miller in the lead. He seems to have made a career of playing anal-retentive Limey twits or chilly Whitehall mandarins - for which see his iceberg performance in Primeval, opposite the indispensable Dougie Henshall. Cast out of rain-soaked England into the sudden sunshine of the New World, the guy never loosens his tie or undoes the top button of his collar. When he finally unbends enough to take off his shoes and socks and wade barefoot in the surf, it's as much of a character reveal as Dorothy Malone undoing her hair in The Big Sleep.


The third season introduced Kris Marshall, who hid his light under a bushel of socially awkward mannerisms, which never convinced me or won my heart. Both the way Humphrey was written and the way Marshall played him were enormously annoying. Here's the weird thing. I kept watching the show. Kris Marshall put me off but not enough to give up on the rest of them, Fidel and Dwayne and Camille. The concept held my attention, and the ensemble. And then another whammy. Putting up with Humphrey, and having lost Fidel at the end of Season Three, we then lose Camille, and Florence Cassell moves up a notch.


We finally unload Kris Marshall in Season Six, and Ardal Hanlon steps aboard. Big improvement. Except that Florence leaves. Two new constables have been slipped into the mix, Hooper and Ruby, but the real blow is at at the beginning of Season Eight, when Dwayne has disappeared, and without ceremony. By this point, the entire main cast has rolled over twice. The only stable support personnel are Don Warrington as the police commissioner and Elizabeth Bourgine as Catherine. Oh, and of course Harry the lizard, a still point in a turning world.

I just find it strange, quite honestly, that I've stuck with it. The locations are gorgeous, the hot colors, the laid back island vibe. There's familiarity, shrugging into a well-worn set of clothes, your expectation that it's all going to be set right. Terrific guest shots - James Cosmo, Adrian Dunbar, Denis Lawson, Clare Holman, Peter Davison.

Who wouldn't give up a week in the clammy UK and fly to the French West Indies? Maybe that's it, in the end. 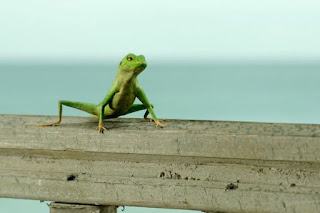 I've got no explanation. I can only suggest that you pick up the DVD's at your library, or stream it on BritBox. You may well be as pleasantly surprised as I've been.
Posted by David Edgerley Gates at 00:00