The Murder of Me, part 1 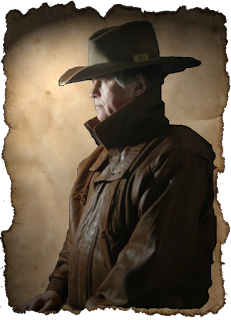 Once upon a time, I became a murder target. This is the story.

Scott volunteered his garage for staging the trip: three canoes, three tents, sleeping bags, air mattresses, backpacks, and supplies. Sandy had purchased a chuckwagon of victuals to feed six for a three-day weekend.

Five of us had met a couple of years earlier as part of a larger wildlife and zoological collection of friends. We often lunched or dined together.

Scott, a serial obsessor, was currently learning film-making and canoeing. His self-professed ‘political lesbian’† girlfriend Sandy invited Bill, her grip, gaffer, and gofer to join us. They asked my inamorata Lauren and me to participate in their fledgling film-making. Their high-energy projects were social and entertaining once we learned to tune out Scott and Sandy’s bickering. Sandy and Scott argued about nothing– all the time.

Jeff slipped into the group late, at 23, the youngest among us. Women admired his flowing blond hair and beard, a General Custer look-alike in three-quarter scale. He always wore white, even after Labor Day. Due to an East Coast work commitment, I didn’t meet him right away. When he discovered I enjoyed canoeing, he suggested the two of us canoe the upper Mississippi.  We made it a sixty mile run from Monticello to south of the Twin Cities.

When news of the jaunt reached Scott, he suggested Jeff and I guide our group on a camping-canoe trek in the northern part of the state. Major consultations ensued, debating whether to venture onto the Cloquet River, the St. Louis, or the St. Croix.

“They’re too bourgeois,” said Jeff. At times, his lip curled like Draco Malfoy.

Sandy perked up. Marxist memes got her blood pumping. Her capitalist man Scott rolled his eyes.

I was curious. “Too bourgeois?”

“Especially the St. Croix, touristy, everyone does it, even Cub Scouts. Let’s run the Vermilion, I know those rivers super well.”

Super well won out over ordinary well. Lauren checked the weather. I gathered maps and charts. Sandy and Scott bought enough food to feed a village through a long winter. Jeff borrowed three canoes. Bill provided an oversized SUV with a roof rack.

According to a hidden agenda, one of us wouldn’t return– ever.

Scott recommended a historical stop, the Frank Lloyd Wright Service Station, Cloquet, Minnesota. Up close, it resembled a diminutive airport control tower, well worth visiting. Jeff said he’d keep an eye on the car while the rest of us took advantage of the restrooms.

As we walked back, a gold glint flashed in the sunlight. My brass lensatic compass lay crushed on the pavement. It was quite old and I was fond of its craftsmanship. Now it lay broken on the tarmac next to our tire.

“It must have fallen out of your pocket,” said Bill, “and someone drove over it.”

Confused, I said, “It was in my pack, not my pocket. How could a vehicle maneuver this close?”

The canvas map case had been stacked on top of our gear within easy reach. Where the hell was it? We dragged out packs and bedrolls without finding it.

Jeff said, “Christ. You were responsible for one thing, and you left it at home.”

“Your what? The great outdoorsman brings a radio on a camping trip?”

“Jesus. Leigh can’t get enough dance music, but he forgets maps and charts.”

The others tittered. I gritted my teeth.

Matters had only begun to go awry.

After an hour of old-growth, deciduous forest, we entered Kabetogama where we found an ideal campsite on the lake shore. Sandy, Lauren, and Bill built a fire for dinner. Scott and I trenched a latrine and erected tents.

I unrolled our down bags and… What the hell? Mine was soaking wet. Unzipping it revealed my canteen missing its cap.

Sandy laughed. “Leigh, you shouldn’t roll your canteen in your sleeping bag.”

“Clearly you did. Guess who’s sleeping in the wet spot?”

I spread it near the fire and returned to inflate the air mattresses. Mine had been slashed open.

“Me!” He chuckled. “You’re paranoid, man. Some people can’t take the wilderness.”

Bill’s forehead wrinkled. “Why are you picking on Jeff?”

“You’re acting really weird,” said Lauren. She moved away from the fire and merged into the shadows, soon giggling with Jeff.

Scott sat beside me. “What’s the deal with Jeff?”

“At the gas station, he chose to stay with the car. That compass was no accident. He had plenty of time. I just don’t understand why.”

When Lauren finally parted the tent flaps, she unzipped her bag from mine and turned away. Scott and Sandy fared better. Their daytime sniping softened into a shut-up-and-fuck-me aphrodisiac in the still of the forest night.

The lonely wail of mournful loons awoke us. Practical joker Jeff kicked loose the pegs, collapsing my dew-soaked tent over me. Lots of yucks. Jeff acted oddly testy as I cheerfully washed up. Although I started the morning cold and wet, we’d soon be on the water, which I loved.

After breakfast, I gave a twenty minute summary of my superb canoe training:


The strokes: forward cross, the back stroke, and the J-stroke. A bowman powers, the stern steers. Life vests, always. In rough churn, down on your knees. Don’t get stupid. Don’t get killed.

Midmorning, the current quickened. We approached a canyon walled by sheer cliffs. The gorge plunged downward and narrowed until it forced the river into an abrupt 90º L. We glided to the left bank so Jeff and I could study it. 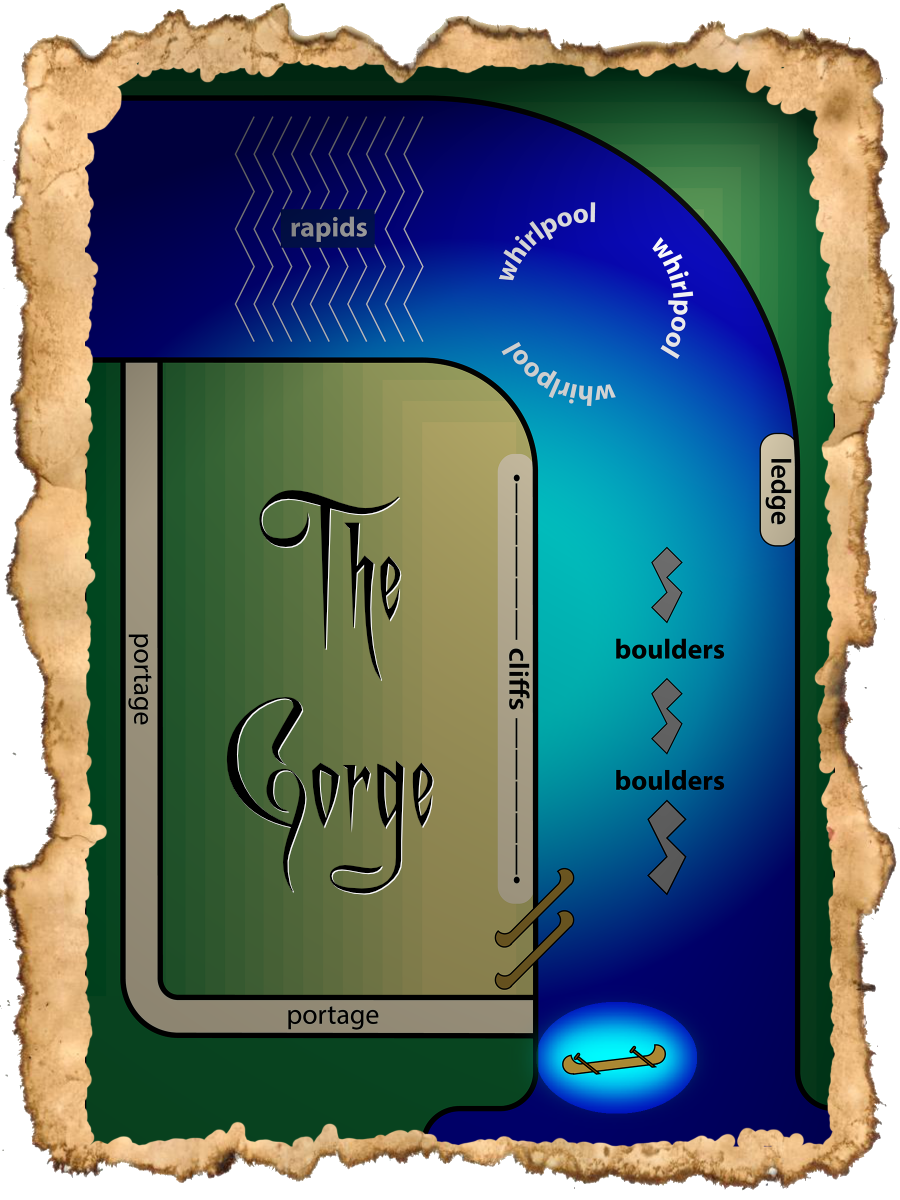 Midstream, boulders spaced over a hundred yards peeked above the thrashing water line, canoe-killers centered in the rushing turbulence.

A few feet past the rocks, channeled by vertical palisades, the river thundered headlong until it swept into a whirlpool at the heel of the ell. From there, the swirling maelstrom emptied down stair-step rapids. Beautiful and challenging, it demanded respect.

Although Jeff and I gauged it navigable with competent handling, we couldn’t be certain until we’d run it once. If we succeeded, he and I would thread each canoe one-by-one through the gorge.

If we found it too perilous, the gang had located a downstream portage trail through the woods. Steep, rough, and given the limited strength of half our party, portaging appeared much less attractive than canoeing the whirlpool and rapids.

I handed my wallet and keys to Lauren. Until that point, I’d worn my life vest loosely. Now I cinched it tight.

Jeff laughed. “What, Leigh? You scared? Are you a pussy?”

Since he’d collapsed the wet tent over me, Jeff had grown more and more belligerent. As the only other member with experience, he should have known better.

I selected the sleeker of the three canoes. I started to step into the stern when Jeff stopped me.

“Not a good idea, Jeff. No offence, but you’re what, one-forty? I outweigh you forty, fifty pounds. We need the bow light and the weight aft. Going in prow-low adds needless risk. There’s no 911. People can die out here.”

Jeff’s lip curled. “Back up, man. We got only your word you’re experienced. I’m responsible for the boats, not you. I drive or it’s your fucking fault this trip’s over.”

The women rolled their eyes. Sandy said, “Christ. It’s just a stupid canoe. Who cares who sits in first class?”

Lauren glared at me. “You’re ruining our trip.”

Damn. Jeff had expertly manipulated the situation and I was losing. He said, “You, the great white canoe instructor, just a control-freak.”

“Yeah.” Sandy just couldn’t keep quiet. “Canoeing is a lot easier than you let on.”

Bill said, “Give Jeff a chance to show what he can do.”

Five people glared at me, thinking me unreasonable. Reluctantly, I acceded. I’d lost their confidence, but with care, I could still guide the canoes through the turbulent gorge.

An unexpected problem arose, kneeling in the bow to lower the center of gravity. The pointed ends of our canoes housed a secret compartment, a little wedge of flotation foam hidden behind a bulkhead, right where my knees needed to be. The bow was not made for people well over six feet tall. Jamming in my long legs locked my ankles under the seat.

We’d planned to return a hundred yards upstream and line up the canoe for the run. Now in charge, Jeff bounded directly into the ravine. The low-lying boulders dominating the center of the river loomed ahead.

“Rocks,” I yelled. I plunged the paddle deep, using it like a rudder to edge the prow aside.

Inexplicably, the canoe swung back, aimed toward submerged stone giants that’d resisted the river long before early man walked its shores. I seized advantage of the momentum to force the canoe toward the other side.

The response defied comprehension. The nose swung back toward the rocks. Disaster raced toward us.

We hit the first boulder. To my astonishment, the force of the rushing current swept us up and over it. Eons of gushing water had polished the granite smooth. It thumped our ass, but the little canoe survived.

I couldn’t fathom the actions behind me. As the second set of buried boulders sped toward us, I thrust to offset the trajectory– to no avail. Speeding toward us…

Instead of the boulder tearing out the canoe’s bottom, the river yet again launched us to safety over the hazard. We didn’t deserve it, but the rushing turbulence repeated its magic trick a third time.

The little craft and I breathed a moment’s respite until hitting the whirlpool. Before I could process events…

Rummmph! The canoe rolled violently to the left.

Instinctively, I rocked the other way. The battered hull righted.

Rummmph! It rolled to the right. No rocks. We hadn’t struck anything.

I twisted around. “Jeff! What the hell’s going on?”

The words barely left my lips before I felt it rock left again.

We’re going over, I realized. Oh, no. The bulkhead held my knees trapped, locking my ankles and hiking boots under the seat.

Tossing away my paddle, I tucked and carried through the roll, not fighting the canoe as it capsized. Upside down in foaming, freezing Canadian runoff, at risk of slamming face-first into a boulder rising from the depths, my life hung on a thread.