My Misadventure on West Thirty-Fifth Street

Yesterday the mysterious Press published The Misadventures of Nero Wolfe,  which Publishers Weekly described as, ahem, "superb."  And who am I to argue?

I have a story in the book and I am racking my brains to say anything about Rex Stout and his wonderful creation that I didn't say here or here or even here.

So let's take a different approach.  Last year Josh Pachter told me he was going to be editing a book of  different authors' takes on the world's fattest master detective and asked if I had anything to contribute.

I had to regretfully decline.  I don't really write parodies and I am not such a fan of pastiches (which I define as writing another story in the style of an already existing body of work.) 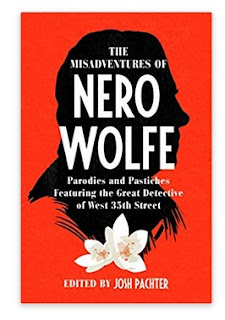 But then I realized that there was a third possibility: a homage.  To me this means you muck around in another writer's universe but don't create another work of the type that writer has already produced.

It can be a subtle difference, I admit.   If I write another Sherlock Holmes story, attempting to keep as closely to Conan Doyle's style as possible, that's a pastiche.  But when Nicholas Meyer wrote The Seven Percent Solution, rewriting the history of Holmes and adding Sigmund Freud to the story, that was a homage.  Got it?

And it occurred to me that I could look at Wolfe and friends from a different viewpoint than Stout had done.  So I told Josh to give me a little time before he started the presses, so to speak.

An important fact about great literary characters: seen objectively a lot of them are annoying as hell.  Seriously, how long could you have tolerated the smug genius of Holmes before you strangled him?  How about Rumpole, Columbo, or House, M.D.?  Even Huckleberry Finn might have been pretty exasperating.  All of them are great to visit, but you sure  wouldn't want to live there.  As Ogden Nash wrote: "Philo Vance needs a kick in the pance."

Science fiction writer Robert Heinlein wrote a number of books about the Howard Families. To oversimplify, these are people who are much longer-lifed than most folks.  The one member of the group who never seems to age at all uses the name Lazarus Long and he is virtually worshipped by his fellows.

But, boy, he seems truly irritating to me.

In Heinlein's book The Cat Who Walks Through Walls, we finally see Long through the eyes of a non-Howard character and guess what? He loathes the guy.  I felt vindicated.

So I wrote a story that looked at the residents of that famous brownstone on West 35th Street from the viewpoint of their neighbors who had to put up with late night meetings, the occasional shooting or bombing... And Josh made "The Damned Doorbell Rang" the last story in the book.

I call that superb.
Posted by Robert Lopresti at 00:00