The Hands of Erik Larson


by Joseph D'Agnese
Back in February, before things went horribly, horribly wrong, I was sitting in the auditorium of a North Carolina university, amid a crowd of about 400 people. Remember those days? Wait—it gets worse. It was an audience filled with book lovers.

They had come that night to hear the author Erik Larson speak about his latest book, The Splendid and the Vile, about the leadership of Winston Churchill during the Blitz of 1940-1941. Larson, as you probably know, is the acclaimed, bestselling author of numerous works of narrative nonfiction, probably most famously The Devil in the White City, but also Isaac’s Storm, Dead Wake, In the Garden of Beasts, and so on.

Narrative nonfiction is modern book publishing code for “nonfiction that doesn’t bore you.” Larson is arguably the form’s most famous current practitioner. I once listened to an editor at a Big Five house assert that Larson invented the technique, and that everyone else who did it today was merely copying him. We were in a publishing office at the time, and I half-expected author David McCullough to leap out from behind a potted palm and gut this person with a Revolutionary War-era bayonet, if the ghost of Evan S. Connell didn’t get there first, wielding General Custer’s firearm.

When I studied journalism in college, my professors sang the praises of such New Journalism writers such as Gay Talese, Tom Wolfe, Joan Didion, Jimmy Breslin—writers who were reporters first, yet used the techniques of fiction to make their true stories read as engagingly as made-up ones. I admired all those writers when I was in my late teens, and even today I never tire of hearing how they organize their information.

That’s why I was there to hear Larson. Well, that’s not precisely true. My wife, Denise Kiernan, an acclaimed, bestselling narrative nonfictioneer herself, was interviewing Larson that night, and she insisted that a) I attend, b) sit in the front row, and c) take lots of pictures. In our small city, Denise does a lot of “in conversations with” various authors, and as a result I’ve become the world’s worst photographer of book events. In my defense, authors hardly move when speaking about books, so how can we expect the resulting photos to be dramatic? I happily found that Larson does love to gesture. Look at those hands! 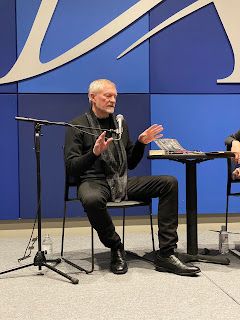 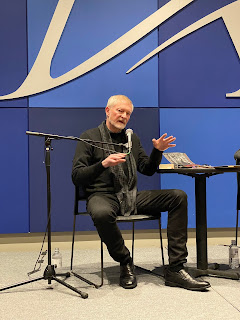 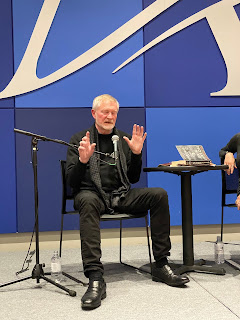 Some takeaways from that night, and from his book, which I’m currently reading. 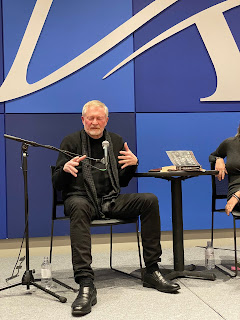 “Let us have an end to phrases such as these,” [Churchill] wrote, and quoted two offenders:
“It is also of importance to bear in mind the following considerations…”
“Consideration should be given to the possibility of carrying into effect…”
He wrote: “Most of these woolly phrases are mere padding, which can be left out altogether, or replaced by a single word. Let us not shrink from using the short expressive phrase, even if it is conversational.”
The resulting prose, he wrote, “may at first seem rough as compared with the flat surface of officialese jargon. But the saving of time will be great, while the discipline of setting out the real points concisely will prove an aid to clear thinking.”

Hearing Larson speak of this, and later reading his descriptions of Churchill’s speeches in the book, moved me deeply and left me longing for such a leader, should such dark times ever leap to the fore again.

A few nights after we last saw Larson, he texted my wife to say that the remainder of his book tour had been canceled, as had the tours of so many authors. Larson's book still shot to No. 1 on the NY Times bestseller list for hardcover nonfiction, as many of his previous books had, but the independent bookstores that were planning to host him no doubt lost out on many of those sales. This is the current crisis facing countless authors and bookstores.

To that end, my wife is on the lookout for ways to conduct her previously scheduled "in conversation" book events virtually. What software are people using to do this effectively? We've heard people sing the praises of everything from FB Live to Zoom to Crowdcast, and so on. Kindly let me know your experiences in the comments. Be well, and take care of yourselves.
Posted by Joseph D'Agnese at 00:00